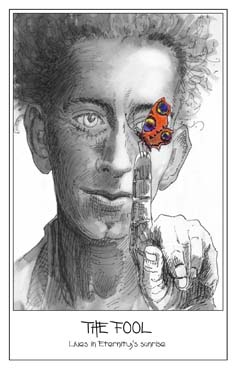 suppose that
the world is not at all what it seems,
and that the scientists
trying to map and explain the universe,
macro- and microscopically,
are actually just mapping their minds’ perceptions of it,
perceptions that are no more than the brain’s way
of making sense of an infinitesimally small part
of the infinite complexity of all-that-is,
that tiny part that our senses and instruments
can, vaguely, sense.

and suppose that
what we see as evolution
is just a game, a random experiment,
not anyone’s or anything’s experiment, mind you,
but rather just perturbations
of, say, for want of a better way of putting it,
nothing into everything,
for no reason, no purpose.
and that like fractal patterns of ice
creeping across a window in the dead of winter,
this apparent evolution just plays itself out —
some of the things that emerge continue and flourish,
while others fail and die out,
in infinite variation.

and then suppose that
one of the things that just happened
in this wondrous experiment, one variation,
following from the random emergence of brains
and central nervous systems
in some of the experiment’s creations,
was the imagining of a seemingly separate self,
an unexpected idea of the brain
of the creature in which it resided
that it was, somehow,
apart from everything else.

would that creature thrive, or shrivel and die out?
would this self-referential thing
so punctuate the equilibrium
of that small part of the experiment
that it would take it in a wholly new
and interesting direction
(enabling the invention of time, and space,
and science, and art, for example)?

or would that sense of separateness
be so terrifying, so traumatizing
to the suddenly self-ish creature that had it,
that it would quickly self-destruct,
unable to handle its implications,
the terrible uncontrollable world it conjured up?

and finally suppose that
(despite the convincing nature of the separate self,
reinforced by other self-conscious creatures
using other strange new inventions
like language and culture)
a few of these creatures suddenly found
this sense of separateness dissolving
until they had lost their selves
and were, again and always
just parts of the lovely, astonishing experiment
of all-there-is.

would (or could) what was left
of these self-extinguished creatures
(using their brilliant and awkward inventions)
persuade the others, still with selves
to join them, to come home, self-less-ly?
and if persuaded, could these others find their way too?

the answer, it seems, must be no:
there can be no volitional escape
from the gravitational prison of the self-made self,
since the self is what gave rise to the prison
and the self is, in the end,
just an idea,
one that cannot forget itself,
an idea that, in hindsight,
as promising as it was, apparently
wasn’t a very good idea after all.

still, if this is true
(and we cannot know)
there might be, if not escape, an inkling
of something that came before the self,
that somehow pokes its way through
the self’s tautological veil
and says, first, that
something is not quite right,

and later, just perhaps, has
(not a path, not a process, not a key)
a glimpse, a remembering
of all-there-is without a self:

(illustration from the Pen tarot deck)

This entry was posted in Creative Works, Illusion of the Separate Self and Free Will. Bookmark the permalink.

2 Responses to a thought-less experiment