Through the Dark Mountain: A Harvest of Myths 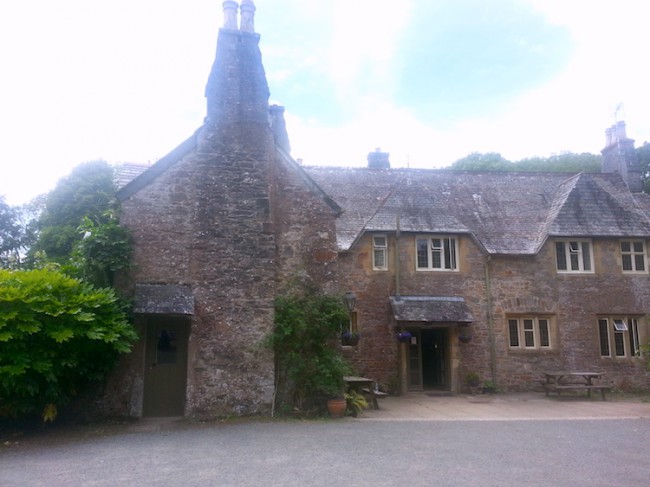 I spent last week at a Dark Mountain retreat at Schumacher College in Dartington just outside Totnes, UK. Along with the brilliant authors of the Dark Mountain Manifesto, Paul Kingsnorth and Dougald Hine, 16 remarkable artists, an equal number male and female, from 7 countries around the world, and all but three from what I could ascertain much younger than I (age 20-38), explored our shared worldview of the coming collapse of civilization, the myths of our culture and the possibility of creating new stories that might be of better service to us in the challenging decades ahead. The main building in which we met, Postern House, is pictured above; it was built in 1380. (While I was there I also had the pleasure of meeting Ben Brangwyn, co-founder of Transition Network and Isabel Carlyle, the Transition Network’s education coordinator, and later, by chance, Rob Hopkins, co-founder of Transition and author of several books about Transition, and his wife.)

A myth is a story that many people believe to be true. It may or may not be true.

The danger with myths is that if people live their lives as if a myth is true, when it is not, they can destroy their lives, the happiness of everyone they know and care about, the world, everything.

At this week’s Dark Mountain retreat, we collectively attempted to identify the dominant myths of our time, in the belief that many of these myths are no longer serving us well, if they ever did. It might be more accurate to say these are prevalent myths in different circles of power and influence, since there are so many of them — seemingly competing for our attention and belief, some of them directly contradictory to others, and some growing in influence while others are losing their hold.

Here is the Harvest, in alphabetical order (grouping seemingly related myths, and some of their opposites):

What do we do with such a list? Here are some possibilities:

Later in the week we began to identify, via brainstorming, a set of candidate stories that might serve us better, while trying to avoid jumping on the antitheses of the myths from the list above that we found most objectionable and dangerous. In my view we didn’t get far enough in this process for a meaningful consensus to arise, but perhaps it is enough that we have started thinking about it.

I believe that the adoption of stories as ‘true’ (turning them into myths) by a large group of people, is an emergent process. As such it is terribly slow, as people have to be ready to believe a story, and that’s a process that (as the media have learned) cannot be rushed or controlled. There is some truth to the Goering claim that “If you repeat a lie often enough, people will believe it, and you will even come to believe it yourself”. But that’s a fragile way of myth-creating — if people don’t really feel it, ‘know’ it deep down, all it will take is someone else to repeat the opposite often enough and people will start believing that. There is some value in telling our truths, loudly, repeatedly, clearly and passionately, and in the case of truths about collapse, courageously. But the impact of any one doing that is inevitably going to be small. Paul, I think, believes that the Ecocentrism story (see under Human Centrism in the list above), is ready to go viral and might become a new prevalent myth; while I agree with him, and hope he’s right, I’m not sure a few more of us telling that story will make a significant difference in its spread.

On the other hand, although the acceptance of stories is, I think, an emergent process, the creation of stories is, well, a creative process, not an emergent one. And what group could be better equipped to create such stories than an informed and sensitive group of artists?

Therefore, what I am hoping will come out of this past week’s connection, work and reflection will be some continuing small-group conversations (probably using Hangout etc.), and then some invitations to creative collaborations (hopefully of the calibre that produced the Dark Mountain Manifesto), that will result in the creation of some entirely new stories that explain what is happening, or what seems ‘real’ in the world or in our culture, in a way that has never been articulated before, and which offer some powerful new insights, ideas, understandings, appreciation, perceptions and perspectives that will affect how those stories’ listeners think and feel about the world, what they believe, and ultimately what they do and even who they are.

Story and art can do that. Darwin did that, with his dangerous new story about how humans evolved, just one of many species, adapting to ever-changing circumstances. Stephen J. Gould did that, with his unpopular story about the emergence of life and then vertebrates (let alone humans) on our planet being an incredibly improbable accident, a random walk. Lovelock and Margulis did that, with their mind-boggling story about all life on Earth being a collective self-managing organism, Gaia, looking to balance the interests of all her inseparably connected and interdependent parts, just as our bodies do. These are myth-makers extraordinaire.

At the risk of this being an anticlimactic end to this post, I want to proffer a half-formed story that came to me as I listened to my amazing new artist friends talk about what brought them to Schumacher College this past week and what they see their role as, beyond simply chronicling civilization’s collapse. This story occurred to me as I realized that (a) since the sixth great extinction actually began many millennia ago, we are not now going in to a dark time, but rather coming out of one, and (b) we are not climbing or descending a dark mountain, so much as passing through one (perhaps one that looks suspiciously, from above, like a ‘normal curve’).

It needs a lot of care and attention, and perhaps collaboration, but I think there is something in this that wants to be told:

What is your role on this seemingly-endless and possibly ill-fated journey? Are you a healer, helping others to cope with the mounting diseases and accidents of darkness? Are you a mentor and teacher, humbly recalling and demonstrating and passing on the skills and preserving the memories your ancestors passed on to you? Are you a student, acquiring the knowledge and capacities that may be needed on the road ahead, in darkness and, perhaps, in light? Are you a facilitator and peacemaker and community-builder, helping your fellow travellers to self-manage each day’s journey so they do their collective best? Are you an artist or story-teller, filling your fellow travellers with pleasure and trickster wisdom? Are you a scientist or philosopher, helping others to make sense of what seems impossible, unbearable? Or are you an exemplar, showing others by what you do, and how you are, a better way to live and be? How are you of service to your fellow travellers, those you’ve come to love or have always loved, those you’ve left behind, those you don’t know, marching quietly or not-so-quietly alongside, those running ahead, impatiently. And, perhaps most importantly, those you will never meet, far beyond where you can see, striding ever-closer towards the light?

Thank you, Dougald and Paul, and thank you my fellow travellers of the past week. You are awesome beyond words and I am honoured to have shared your company.

8 Responses to Through the Dark Mountain: A Harvest of Myths