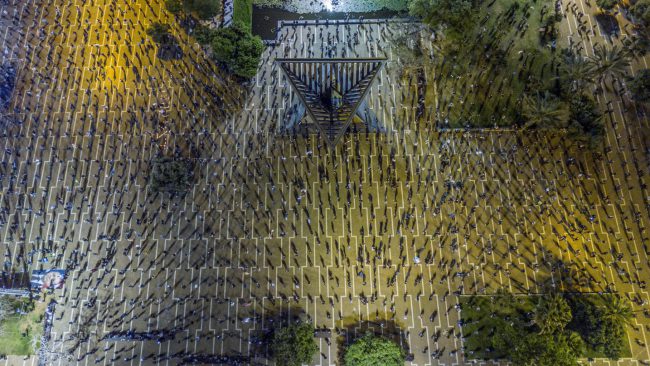 Turning and turning in the widening gyre
The falcon cannot hear the falconer;
Things fall apart; the centre cannot hold;
Mere anarchy is loosed upon the world,
The blood-dimmed tide is loosed, and everywhere
The ceremony of innocence is drowned;
The best lack all conviction, while the worst
Are full of passionate intensity.

Surely some revelation is at hand;
Surely the Second Coming is at hand.
The Second Coming! Hardly are those words out
When a vast image out of Spiritus Mundi
Troubles my sight: somewhere in sands of the desert
A shape with lion body and the head of a man,
A gaze blank and pitiless as the sun,
Is moving its slow thighs, while all about it
Reel shadows of the indignant desert birds.
The darkness drops again; but now I know
That twenty centuries of stony sleep
Were vexed to nightmare by a rocking cradle,
And what rough beast, its hour come round at last,
Slouches towards Bethlehem to be born?

Yeats wrote this famous poem on the heels of the first World War, presenting an alternative vision of Christianity’s joyous “second coming”, describing instead a dreadful “beast” seemingly about to be born. He laments the lack of conviction of those deadened and paralyzed by recent events — those who might be able to shift the world from such a course. And he laments the passionate intensity that seemingly remains, then as now, only in the ignorant.

In some recent correspondence, my friend Paul Heft reminded me of this poem. We’ve been talking about what our collective reactions to the current pandemic forebodes for our response to the immensely greater challenges of economic, climate and ecosystem collapse as the sixth great extinction gathers steam.

I thought I’d share some of these thoughts, which Paul prompted with his characteristic skill and thoughtful questions (thanks Paul!), in case my musings are of use to others contemplating the nature of the beast now slouching towards Bethlehem, waiting to be born:

I.   What the Photos Said

I was struck by the utter dissimilarity of two much-publicized protest demonstrations in the past week.

The first, a week ago, featured an angry mob of old white men in Michigan, many of them brandishing massive assault weapons, crowded together on the capitol steps, carrying “end the lockdown” and “Trump|Pence” signs.

To me these contrasting images say so much about our different worldviews, and about how we are all struggling in the face of a seeming decline in democracy, tolerance and critical thinking everywhere.

It is easy to mock the Michigan protestors, and to be outraged at the overt white privilege on display on the state capitol steps. (Imagine if these had been people of colour!) It is harder to try to understand what desperation drove them to do what they did, or how powerful the ‘disinformation’ media controlled by vested interests have become that they can goad thousands to do this — and make so many feel so helpless and terrified. And to try to understand how a massive political party (the US Republican Party) has been so cowed that they make excuses for this dangerous behaviour instead of condemning it.

Why do these photos strike such a viscerally different response in us? How could anyone look at these photos and take a diametrically opposite view from ‘ours’, of which protest was justified and necessary, and which was not? And how is it that both photos, each in their own way, ultimately evoke feelings of hopelessness in us?

I’m a joyful pessimist about our future — I think our industrial civilization will slowly collapse over the coming decades, but that that will ultimately be a good thing as it will usher in, of necessity, more sustainable, relocalized and connected ways of living on our fragile blue planet. But now I wonder: What spirit will we see arising from the collective struggle in the meantime — the kind of courage and collaboration that has been so much on display everywhere in the face of the pandemic, or a response that is angrier, more antagonistic and less caring of others, ultimately giving rise to totalitarian states that most of us have never had to experience but which our grandparents warned us about?

Maybe I’m old fashioned, but I think the media are just giving people what they want, which is to be distracted and entertained. They don’t want to be informed (just look at “What’s Trending” on Twitter). They want things to be simple. They want the same thing from Faux News that they want from Reality TV. The media have no interest in promoting particular ideologies or candidates. They want ratings, subscribers. They don’t do investigative journalism, not because they don’t want crooks uncovered, but because it has no ROI. There’s no money in it.

I think (I’m about to go out on a really thin limb here) the best candidate for the Democrats right now (and for 2024) is Alexandria Ocasio-Cortez. She could transcend political ideologies for the same reason Trump has to some extent done so — because she’s beholden to no special interest and doesn’t bullshit. I think she could win by a landslide in 2024. (I also think Michelle Obama would make a hugely popular VP, so pay no attention to what I say.)

I don’t think the Republicans lack principles. Running for office is a lousy way to make money, and most politicians I’ve met, even the ones I’ve loathed, are doing what they’re doing because they think it’s right for their country. I think Trump makes them squirm, but they’re kowtowing because they’re scared that if he goes off on them they’ll lose their jobs and their power to do anything. And they’re right to be scared. They’ll be delighted when he’s gone, but rightfully worried they’ll never get elected again without a populist leader they can’t control.

What spirit will we see rising? A combination of those who are fatalists, realists, pragmatists and plodders (but not slouchers) — but who to stay level headed will appear to be “without conviction”; and those of “passionate intensity”, idealists across the political spectrum fervent in their desire to implant their ultimate solutions in the bloodied soil. Fortunately for us all, in the end, the idealists always lose.

III. We Can’t Change It, But We Can Walk Away

I’ve come to appreciate that systems, including economic systems, don’t really exist — they’re just concepts that people have made up to try to explain (imprecisely, and often badly and simplistically) what is happening, but as David Graeber has explained the whole idea of an “economy” is new, and kind of preposterous, in that it goes against the grain of actual human behaviour. So I can say “the system is the problem”, and in a way it is (it’s not the evil conspiracy of some diabolical powerful elite). But there is actually no system — what happens in our society (or “economy”) is the collective result of 7.8 billion humans’ behaviour, and there is no shared ideology driving that and no one “in charge”. So when I read from career environmental “activists” that “we need to quickly do X”, my eyes glaze over. “We” have never done anything.

I think this is now pervading my thinking about systems and how to change them (or if we even can). Systems are just the brain’s patterning, generalizations and models of what seems to apply, which actually has nothing to do with any of the moving parts, which are partly mechanical, partly random, and partly conditioned. ‘We’ can’t change them because we’re just moving parts within them, and in any case the perception there’s a cohesive ‘system’ at work is just a mental construct. Volition and agency are illusory; we’re all doing the only things we can do in the moment, which includes affecting the conditioning of others who are likewise doing the only things they can do, and which also includes perceiving, incorrectly, that there is a cohesive and coherent ‘system’ at work and that it can be changed through volition.

So I stumble at the idea that we must get rid of capitalism, not because ‘we’ can’t do that but because there is no such thing as capitalism; that’s just a description of what happens when people get conditioned to do things with the expectation that ‘that way of doing things’ will be best for them and mostly everyone else. To say we must all change X, suggests that 7.8B humans have a shared coherent sense of what they’re doing and why, (and can therefore shift to doing otherwise) which they absolutely don’t, and can’t. The Indonesian trader who buys bats from a cave harvester and sells them as a delicacy (or a source of pharmaceuticals) in his daily market isn’t conscious of whether he’s a capitalist or a socialist.

The writings of Ronald Wright and Jared Diamond have persuaded me that apparent ‘systems’ (civilizations, social/political/economic ‘systems’ etc) end when enough people walk away that they lose the appearance of coherence; when almost no one still acts as if they are functioning, they cease to function. Hence apparent systems collapse rather than being reformed, not because people are stupid or ignorant or arrogant, but because you can’t reform an appearance. You can just ‘walk away’ (to use Daniel Quinn’s expression) and when enough do that, it will collapse.

But there is no planning or designing or substituting another economic system — that’s just an idealist’s dream. What appears to be the new ‘system’ will be a localized relatively simple subsistence life (probably better than civilized life as we know it for most, and probably not so terribly different, so not too hard). Over time, complexity may re-emerge to the point there appears to be a ‘system’ at work, but it’s just our imagination. We’re all doing our best, and what you see is what you get when that happens.

No one is to blame. Not even for Trump. He will probably be re-elected, and no one will be to blame. The best we can do is roll with it, and hope that the sense of helpless fear of collapse doesn’t (as it did before all the biggest wars) enable people who have no choice but to be psychotic autocrats to make the situation even (for most) unimaginably worse. That may well happen, especially when the autocrats have all the money and most of the military power.

But it may also happen that collapse will be a relatively timid and stretched-out affair, with most of us trying to help each other out, the autocrats and their friends suddenly discovering that their paper wealth is now worthless and hence they can no longer buy or maintain power, and society dissolving, like a million plague-afflicted communities realizing we’ve been completely left to our own devices, discovering we’re better at self-management than we thought — and that no economic system is actually necessary.

Walking away is neither an act of conviction nor an act of passionate intensity, to return to Mr Yeats. And that is probably a good thing. For those who have lost the conviction that we can control our future or our trajectory, and who lack the passionate intensity to proffer and work for a renewed, reformed, or other ‘new and improved’ society, our job now is to watch, to pay attention, and to know when and how to walk away, and to show others the path. Not a path forward, not a path back, just the only path left, the difficult path away from what no longer works. There is no purpose trying to follow, or to kill, the beast slouching towards Bethlehem.

There will be no second coming. Nothing is coming. Instead, sooner or later, as everything falls apart, we are all leaving.

4 Responses to Slouching Towards Bethlehem