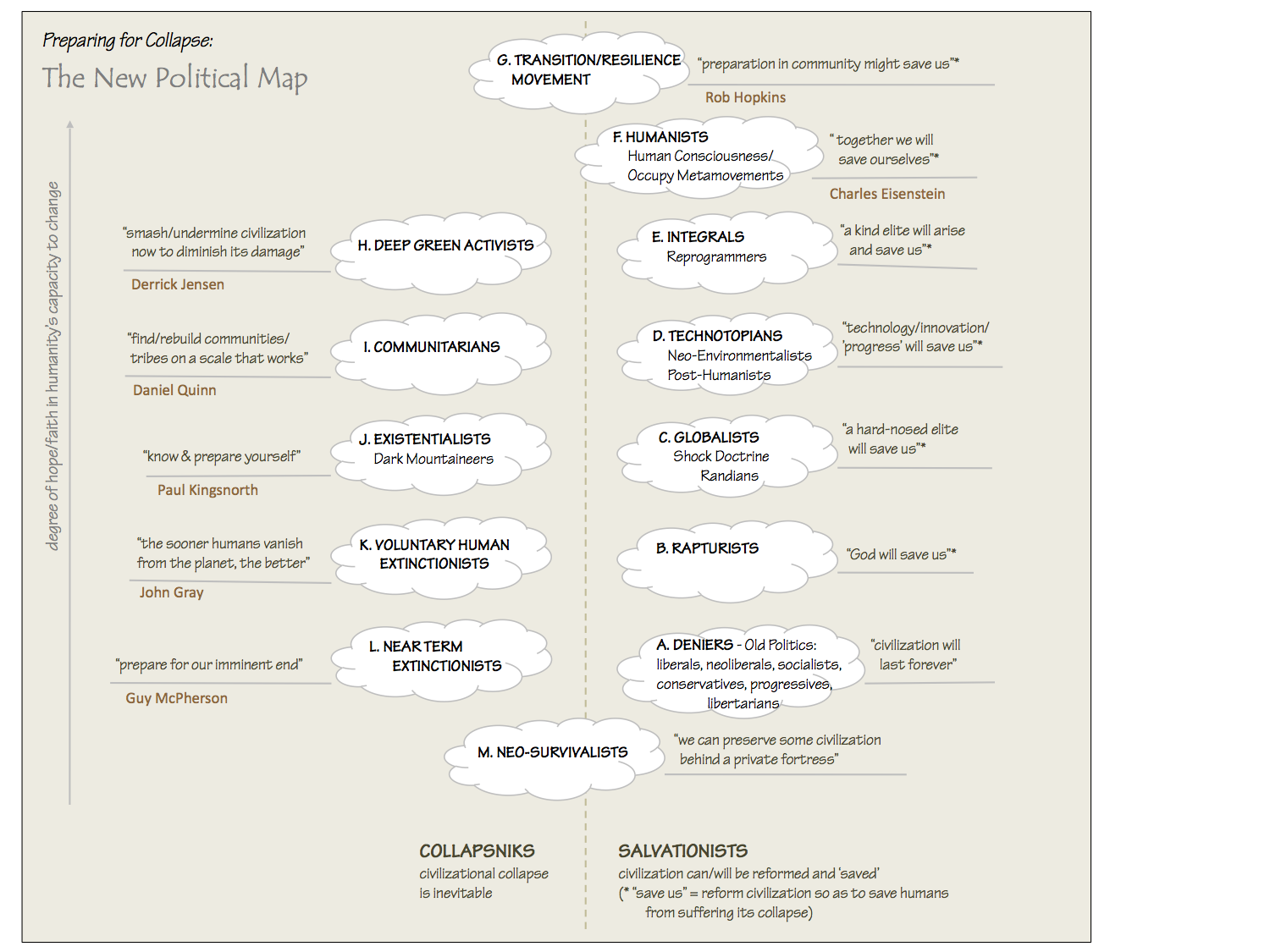 (right click on the image, or click here, to open full size in another tab/window; I made this in 2015 so it’s a bit dated)

A lot of people who profess to be atheists or pantheists in their youth, tend to adopt religions when they get older. More than anything else, this seems due to their running out of capacity for feeling responsible for all the world’s ills. Deciding to believe in some higher power and authority — a god, a guru, a Gaia — to some extent gets you off the hook.

Most of my friends throughout my life have been salvationists of one stripe or another (right half of the chart above), and the lion’s share of them have been what I would call Humanists — people who, in wikipedia’s words have a “philosophical stance that emphasizes the individual and social potential and agency of human beings”. They believe that humans can and must exert social and ethical responsibility for our personal and collective actions, and the stewardship of the entire planet. More importantly, they believe, mostly, in the myth of progress, and that there is almost nothing that humans cannot accomplish if we set our minds to it.

This can, of course, be exhausting, especially when things are going particularly badly for the human experiment, as they are now.

Religions offer the comforts of tradition, rigour, continuity and ritual, all salves for the exhausted and disenchanted. In most people’s lives, it seems, there comes a time when they just want to be told what to do, what to think, and what to believe by someone they trust, instead of being overwhelmed by having to make personal, informed, rational, caring decisions about every little thing.

Because few of my friends have been religious, my observation of this has been mostly in, of all places, the workplace: In most offices and factories, a ready co-dependence develops between bosses, who come (I believe psychopathically) to believe they are divinely inspired/gifted to lead and impose their decisions on others, and their exhausted, clueless workers, who are more than content to leave their brains and hearts at the door when they arrive at work. Like military troops on the front lines, they run no risk for simply following orders, and are usually rewarded for doing so even when the results are disastrous. (Though, as in most hierarchies, a “suck up, shit down” culture prevails.)

I see the same mentality among the devoutly religious — a willingness to cede personal authority and control over their own decisions and lives, in return for absolution from any ‘sins’ because they’re doing some god’s will. It’s perhaps no coincidence that much of the military comes from areas with high levels of religious fundamentalism.

More devout atheists might see this as moral and intellectual laziness, but my sense is that it’s mostly a matter of conditioning — We tend to believe the same things as the people around us, and in our modern isolated world where most never meet people with radically different ideas or cultures one-on-one, those beliefs are often never challenged and hence fervently held. And to some extent it’s also a matter of exhaustion, of overwhelm, of giving up when everything seems impossibly complex. So, a retreat to the simple.

I do believe we’re all doing the best we can, but I don’t believe this the same way humanists do. Humanists would say “We need to try even harder, and keep trying”. Whereas, as a non-believer in the cruel philosophy of free will, I don’t believe we have any choice whatsoever in what we do, think, or believe. People who are conditioned by other humanists and not exposed to other belief systems are going to become humanists, full stop.

The life of a humanist is not an easy one, holding all that sense of responsibility, frustration, anxiety, distress, despair and grief about what we have done and are doing to each other and to this planet, when, in their minds, we could have done better.

It’s also a trap: If you’re a Denialist, someone who always believed civilization was going to last forever, you have a lot of pretty easy alternative salvationist political philosophies to migrate to. If you’re religious, you can become a Rapturist. If you’re a one-world idealist, you can become a Globalist and pray to the Davos gods. If you think Elon Musk is not deranged and love reading about singularities, you can become a Technotopian. If you’re drawn to new-agey gurus who urge you to transform to purple, you can become an Integral. If none of these appeals to you, the Humanist tent is big enough for everyone else, and you can go on believing that salvation will come, though it’s going to take a lot more work than you’d hoped.

But once you’ve become a Humanist (and, damn, I was there a long time), you’re trapped. There’s no going back to denial, or to any of the forms of simplistic, idealistic utopian thinking. And going forward to accept that civilization’s collapse is inevitable, no matter what, is a violation of everything you believed, an admission of the personal and collective failure of our entire species. Ugh!

And even if you are able to admit that failure, and move on to collapsnik thinking, it doesn’t get any easier: Become a Deep Green Activist, and risk imprisonment, death, and losing most of your friends, when you know nothing you do will change the end game anyway. Or become a Communitarian, trying to create a functional system that is constantly undermined by the existing economic system and replete with really dysfunctional people who were drawn to communitarianism out of desperate need rather than idealism. Or become an Existentialist and watch your Humanist friends call you a lazy defeatist and “part of the problem”. Or become a Voluntary Human Extinctionist and watch them call you a misanthropic nihilist. Or become a Near Term Extinctionist and have them call you a nutcake. The options are all grim.

Better to stay in the Humanist camp, even if it is a trap. At least your friends will still talk to you.

Paul Kingsnorth was one of the first to articulately convey the absurdity of believing that civilization’s collapse can be avoided or mitigated. He got a lot of flak for that, but he co-started (with Dougald Hine) a movement (Dark Mountain). That movement, unfortunately has devolved, like Rob Hopkins’ and Ben Brangwyn’s Transition movement, into yet another idealistic humanist movement, preoccupied with the need for “social justice” and drawing on “indigenous wisdom” and “mythic transformation” and other platforms of belief about what we can and should do to make the world, and ourselves, “better”.

Humanists can be a bit of a cancer — they will infect and take over anything they touch. But the two movements were (like the humanist Occupy movement) fascinating while they lasted.

Paul has recently converted to Orthodox Christianity and regularly speaks on the subject. He has also “changed sides” and now opposes all government mandates, including vaccines. He has not become a salvationist, but his endless search for a “new story” to replace the hopelessly flawed story of civilization has taken him to embrace religion. He now asserts that the “question of the times” is: “If/when I fully accept the reality of this time, how am I called to live a faithful, fully human life, here and now?” Called by whom? Faithful how and to whom? ‘Human’ meaning what? I guess he knows what he means. To me this question is as meaningless as “What am I going to do once the Rapture comes?” But I bet a lot of people like his question, especially the humanists who can take it to mean almost anything they want.

When I met him at a Dark Mountain gathering during its early days, a group of us attempted to identify the myths held by and underlying our civilization, and some of the new myths embraced by its discontents. Of course, myths aren’t necessarily false, and they are the foundation of almost all religions. Paul seemed nonplussed when, back then, I suggested that, rather than look for a new story, we should give up on stories, and myths, and see whether, like wild creatures, we could live just fine without them. So now he has his new story, an ancient one, and I am still trying to live without one, shaking off the ones that seem, like burs, to cling to me at every turn. Salvation, and collapse, are, of course, stories too. And all stories are fictions.

Living with “unknowingness”, with uncertainty and complexity and ambiguity and endless cognitive dissonance is something humans seem disinclined to do. I will never understand that about most people, and have no idea why I embrace them with such endless curiosity and joy.

Beliefs and ideas and stories, to me, are fascinating, and fun, and exploring them is a bit like trying on new clothes. They can be pretty, and flattering, but after a while they wear, and wear on you, and fade and fall apart. They are affectations, unnatural, and they start to smell when they get old.

I suppose I pick on humanism because it afflicted me for much of my life, and still characterizes most of those I know. It’s an old and compelling story, like the story of progress, but any objective examination of the evidence shows it to be untenable.

Just like all the other stories that so many people, so fervently, believe.

11 Responses to The Humanist Trap