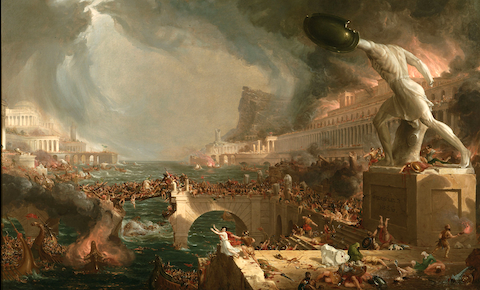 Thomas Cole’s ‘Destruction’, the fourth of his five-panel series ‘The Course of Empire‘, 1836. Public domain.

Several people have pointed me to Chris Hedges’ latest article “The Dawn of the Apocalypse”, which includes a lengthy summation of the current state of climate collapse, and includes links to recent interviews with Extinction Rebellion founder Roger Hallam.

I think Chris, and Roger, have it mostly right, except for two things:

Let me take these two issues in order:

The futility of the blame game

There’s an almost religious presumption in many of the current proclamations by climate activists that a forced, death-bed repentance by the fossil-fuel industry and those who support it is possible, or would be significantly helpful.

I don’t think either of these presumptions is true. A radical reform is not possible because it runs counter to the basis of our entire economic system, and would immediately lead to the sacking of the repentant and their replacement with non-repentant corporate leaders. It would not be helpful because if Big Oil stopped meeting the now-essential needs of 7.9B citizens demanding ever-more hydrocarbon fuels, they would be quickly supplanted by nationalized enterprises, the underground economy, and individuals burning coal, wood, and anything else that’s flammable to fill the gap. We the citizens are addicted to crude, and we will get our fix, and the ecology be damned.

We’re fucked, and there’s nothing we can do about it. We are going to burn the rest of the world’s fossil fuel reserves (or substitute wood and coal and anything else that will burn if/when those reserves become unavailable or uneconomic) sooner or later, because we will never tolerate the immense short-term suffering that will come from not doing so.

Trudeau and other ‘moderate’ leaders aren’t encouraging more and more fossil fuel burning because they’re evil selfish corrupt monsters — they’re doing so because they think that, given the delicate balance of ecology and economy, this is the best ‘middle path’ they can follow given the very little control that they can wield at all. If they were to pursue the radical course Chris and Roger propose, they would be quickly deposed, and the coups would have the tacit support of the majority of citizens of all political stripes.

It’s quite simple: None of us is willing to make the sacrifices necessary to avert collapse. We have shown that to be true in our elections and our buying decisions as much as through the corporate behaviours we tolerate. We’re not “to  blame” for that. This is our well-intentioned nature, and the expression of that nature is now colliding with the longer-term interests of our planet and all its residents. This does not make us evil; it makes us human.

Laying the blame, whether on ‘evil’ others or on our ‘sinful’ selves is misplaced, pointless, and emotionally lazy. It’s merely a way for the religiously (in the broadest sense of the term) indoctrinated to feel morally better about what they have and have not done in the face of the crisis.

So yes, Chris and Roger, we’re fucked, and it’s going to be mostly awful. But only when we acknowledge that collapse is inevitable and that laying blame achieves nothing, can we start to help each other cope with that grim realization and start to prepare for the radical changes in our lives it will necessarily usher in.

There is also a giant part of the collapse equation that Chris and Roger do not discuss, partly because they will lose much of their audience if they try to explain the full complexity of the situation, and partly because it will make their suggested radical solutions appear hopeless and moot.

Climate collapse is one facet of the accelerating ecological collapse that is producing the sixth great extinction of life on this planet. Other facets include biodiversity loss, the destruction of our soils, the massive despoiling of our fresh waters and oceans, the fouling of our air, the disruption of once-stable global air and water currents, and many other types of destruction and unbalancing of the ecological systems on which we all depend. Even if climate change were magically solved tomorrow, ecological collapse would continue to accelerate. It would just take a little longer to undo human civilization.

And even more importantly, missing from Chris’ and Roger’s discussion is the impact of economic collapse, which any careful reading of history will suggest is going to precede, complicate and exacerbate ecological collapse.

Economic collapse, brought about by the realization that almost all current debts are unrepayable, and that in a fixed-resource world, perpetual profit growth (on which almost all of the value of assets from homes to stocks utterly depends) is impossible, is as inevitable as, and more imminent than, ecological collapse. As I’ve written at length elsewhere, the economic collapse that much of the world is already grappling with will be permanent, not just a temporary depression. And it will be global. We have reached the limits to growth, and instead of reducing our consumption to adapt to that hard reality, our consumption is still increasing exponentially. Permanent global economic collapse means, for example, that we will burn the last of our forests, our coal and wood and finally our furniture, because we will not be able to afford to extract the last of our oil and gas, and because we desperately need the fuel.

Economic collapse will cripple the capacity of governments and regulators to do anything to address ecological collapse, because it is almost certain to precipitate political collapse and bankrupt governments (even the few that are not already ‘technically’ bankrupt) and corporations. As those corporations go under and cease operations, we may get our wish that the remaining hydrocarbons on which our civilization depends will remain forever in the ground. But we may well regret that wish.

We are going to find ourselves, gradually and haltingly over the next few decades, in a world of helpless chaos — a world in which, like most humans throughout history, we will have to rely on our own local resources and our own local community to give us what we need to survive and live sufficiently.

This will be a massive challenge, and some communities will rise to the occasion, while others will not. We’ll have time to adjust to not bringing new children into the world, which will alleviate the suffering of collapse somewhat. We’ll have time to relearn the essential skills of living in community and with each other, which may well be astonishing. The debates we’re having today, about what we and others should or should not be doing, will be forgotten.

The word apocalypse in Chris’ title is, tellingly, a religious one, referring to the revelation of a divinely-invoked cataclysm followed inevitably by the permanent triumph of good over evil. The religious, it seems, can never give up their crutch of hope, their belief that, no matter how we sin, we are a species of destiny.

In the real world, nature doesn’t give a fuck about our species, and whether it survives or perishes, thrives or suffers. No other species would lament our disappearance from the planet, which may or may not happen soon.

There is no apocalypse, and there has never been one. Just plain ordinary garden-variety collapse, which happens from time to time, when things get too far out of balance.

Nothing to be done about that, and no one to blame.

14 Responses to Collapse, Not Apocalypse