How Our Bodies Sense the World, and How ‘We’ Misinterpret It 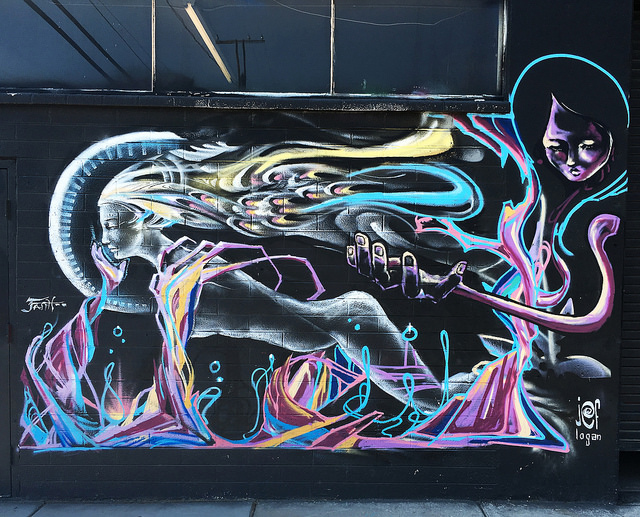 Las Vegas street mural “sensory perception” by Jef Logan; flickr photo taken by wiredforlego CC BY-NC 2.0
When we look out over the sea, listen to a song, touch a pinecone, smell the salt air, or taste a raspberry, we perceive what our body senses as being ‘real’ and as being an ‘experience’, happening to ‘us’. In this article I’ll try to explore what’s really going on, and how ‘we’ ended up getting it so wrong.

The first sense that evolves, even before we are born, is the sense of touch. That sense is staggeringly complex itself, comprising not only sensations of physical contact but also sensations of temperature, pressure, something called ‘vibration’, relative position, change of position, pain, stretch, itch, and correlated sensations of adjacent places in the body, plus an unfathomable host of ‘feelings’ within our bodies. This sense evolves long before birth because, for example, it ‘tells’ our bodies the limits to which we can safely stretch, so we don’t tear ligaments or do other damage. At this stage the brain processes these sensory inputs autonomically — there is no ‘conscious’ thinking; there is no ‘self’ (yet) to be conscious of anything. The fetus has evolved over millions of years to respond to changes in its environment safely and healthily. Trillions of ‘unconscious’ actions and ‘decisions’ are made as it moves, digests, reacts, exactly as this happens in any other living creature, including the trillions of microorganisms in each human body.

The senses of taste and smell develop very soon after that, so that the fetus gets to recognize the smell of its mother, can immediately differentiate its mother’s milk from anyone else’s, and has started developing a sense of what tastes its mother finds preferable, which it can start to emulate when it’s born. Hearing follows a bit later, so that the infant will immediately be able to recognize voices as mother, friend or stranger, not as words, but as tones — safe or dangerous, reassuring or alarming — and react accordingly. Sight is the last sense to evolve, because it is the least important at the moment of birth. So while a fetus will feel pain (say, if the mother has a digestive ailment or a fall) that feeling is not identified as ‘pain’ or as something happening to ‘it’. It is just felt. From the moment of birth, a similar first-order reaction to visual stimuli begins to occur. The infant’s sense of sight converts the wavelengths reaching its visual receptors into signals, which it relays to its brain.

As the infant grows, its brain starts to exhibit a second-order processing of what it senses: It will develop a model, based on instincts, memories, and conditioning, of appropriate reactions to some signals — to be attracted to, or repelled by, or to move around, different ‘features’ based on their sensory qualia. Even tiny microscopic creatures do this — this is not ‘consciousness’, in the sense of a feeling of being separate from everything-else. It is  the autonomic translation of sensory signals by the feature-detection system into reactive behaviours. When we’re asleep, many of these translations (eg the digestion of our midnight snack) continue — no ‘thinking’ intelligence, and no ‘consciousness’, is required.

The brain has evolved for millions of years, without any need for ‘consciousness’. We can find and consume nutritious foods and drinks, create temporary makeshift protection from extreme elements, and propagate the species very effectively without the need to perceive ‘ourselves’ as separate from everything-that-is. The myriad, amazingly diverse species of our planet have seemingly been doing so for billions of years. If this hadn’t been enough, and even optimal, evolution would have ended, or taken some unimaginable turn early in our planet’s history. Even activities like swimming and navigating a car can arguably be done not only well, but better, ‘subconsciously’.

But then, just a blink of an eye in the past, some time after humans split from bonobos and chimps, something strange happened to members of what John Livingston calls the “rogue primate”: The human brain, with lots of excess unused capacity and time on its hands, turned its feature-detection system around and looked at itself. It was, without too much difficulty, able to construct a model of reality, one that seemed potentially very useful and interesting, that perceived of the body in which it was apparently residing as something separate from everything-else.

The brain loves nothing more than finding patterns and making sense of things (sign of a good feature-detection system), and this new model was a doozie. It offered the possibility of being able to predict and prevent danger, and to aspire ‘consciously’ towards better (survival) outcomes for itself. This came with a huge learning curve, however. Everything-else now had to be parsed, labeled, and judged, relative to the survival and, increasingly, relative to the happiness of the apparent self. Thoughts and feelings, which had always arisen as fleeting ephemera in the brain and body, now had to be identified as belonging to the self, harnessed, evaluated, and dealt with. In order to properly categorize memories usefully towards the exercise of this new apparent self’s free will, a mechanism called ‘time’ had to be invented, along with the concepts of past, present and future.

And all this conceptual stuff had to be coordinated with other now-apparently-separate selves in the tribe, and the only way to do this was to invent complicated languages capable of the kind of abstraction and labeling the newly-emerged self was now preoccupied with.

So when ‘we’ go for a walk in the forest, we don’t see the natural reality of everything-that-is — a wondrous, timeless, spaceless, purposeless, meaningless dance of astonishing apparent happenings, with our bodies instinctively (and drawing autonomically on memory and conditioning) reacting in an evolutionarily appropriate way, unconsciously.

Instead, ‘we’ navigate the world through the intermediated model that our self has constructed to represent reality. ‘We’ see trees and other ‘separate’ things, with names and boundaries and purposes, and feel obliged to assign meaning and volition to what these separate things appear to be doing. Reinforced through the use of our abstract languages by other apparently-separate human selves, we ‘live’ within our selves’ constructed separate reality, the hologram they have created. Our ‘selves’ are, by their very nature, hopelessly disconnected from everything-that-is.

When ‘we’ look, we see only separateness, trees labeled as such, each apart and each comprised of endlessly separate components (leaves, molecules, cells, elements, atoms, quarks, waves, all the way down). We have cast aside the perceptual lessons of billions of years of evolution in favour of a wan, lonely and radically-imperfect conceptual model of reality. The self-preoccupied human can no longer see everything-that-is, because it doesn’t fit with the new model. There is no place for the separate self in everything-that-is. That’s why the separate self has a deep-seated sense there is something missing, something wrong, something that has been lost, and why we endlessly and hopelessly search for it.

So we think trees are green, each one separately growing and dying, each with an absolute border between it and everything-else. No other creature, it seems, is similarly afflicted — bees with their staggeringly-complex sets of eyes and fully-integrated feature-detection systems ‘see’ trees and flowers as just waves of colour and vibration (different colours and many more images per second, and with a range of other qualia we can’t begin to perceive or understand). They don’t fly into trees or what we would call ‘solid’ objects because they ‘know’ instinctively, and have learned evolutionarily, to fly around them — there is no ‘conscious’ decision to do so (“tree coming up, have to fly around”) because there is neither enough time for such ‘conscious’ decisions, nor any need for them. Instinct, intuition, ‘the guidance that comes from inside’, evolved over millions of years, is more than enough.

There can be a glimpse — a sudden wondrous awareness that this holographic representation of the self and its world is not real, and that everything-that-is is the natural reality, at the still point where there is no time and no space. And that glimpse reveals that the self-created model on which modern humans and their civilized societies now utterly depend (and believe to be the true reality) is not only a self-delusion but completely unnecessary, a model that hasn’t helped those afflicted with selves succeed better evolutionarily, while those (apparently few) who are not so afflicted function perfectly well without it.

The tragedy for those who seek such a glimpse — or enlightenment or whatever you want to call freedom from the self — is that there is no path to it. There is nothing that the self within its preoccupied world can do to get rid of itself, and trying only focuses even more intensely on the “I am separate” self and its hopeless predicament. I, the writer of this, know what a glimpse is, but it was not something ‘I’ experienced; it was an unexpected, and unattainable, brief falling away of this self. My self is back with a vengeance, but now I’m prepared to acknowledge the plausibility of this impossible message, and the more I study this possibility with a scientist’s and skeptic’s mind, the more it just makes sense. And the less all the complicated theories and models of scientists and students of human nature rooted in the belief in separate selves in time and space, make sense.

I am not writing this with the hope or expectation that anyone reading will understand or agree with it. It cannot be successfully described, argued, empirically defended, demonstrated or proved. Yet while achieving some clarity about this explanation of reality and unreality does not bring liberation from the self’s enduring sense of its own seemingly-irrefutable existence, its apart-ness and lifelong predicament, it somehow resonates with something deep inside, something that is beyond ‘me’, something that somehow ‘knows’, remembers, when the truth was seen, when there was nothing missing, nothing to be done, no thing apart. Only this.

I sit upon the forest’s sphagnum floor
each day
and will my stubborn self to fall away.

First, I try to meditate,
to “clear my mind of thoughts”,
but the mind is a small child
always grasping at new and shiny things:
“mine, mine, mine”.

So I try self-inquiry
but my self isn’t talking
without its lawyer present.

Then I try “just looking”
but my self isn’t buying any of it.

I try “just letting go”
but the self on the other end
just holds on tighter.

So I try surrender
and my self smiles, leans back,
and clasps its hands behind its head.

Finally I resort to resignation
but my self pulls out a life contract
and points to my signature.

Still, I remember, somewhere
deep inside these dis-enchanted bones — except
it’s not a memory,
it’s a piecing-back-together,
a reassembly of what somehow came apart.

There are no words for this

This entry was posted in Creative Works, Our Culture / Ourselves, Radical Non-Duality. Bookmark the permalink.

3 Responses to How Our Bodies Sense the World, and How ‘We’ Misinterpret It