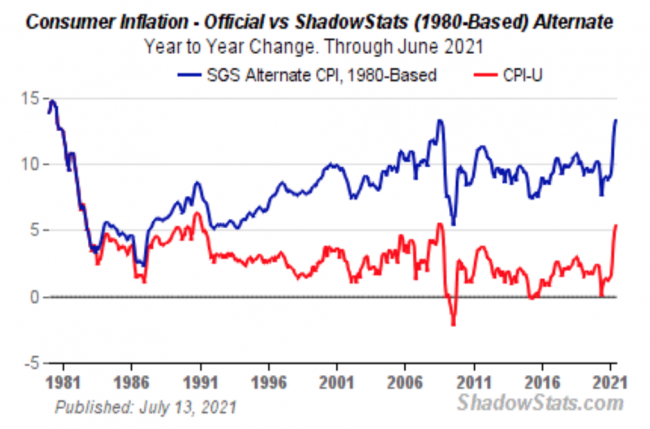 actual vs official rate of inflation (CPI), per ShadowStats

In the first part of this article I attempted to explain how and why what I call Extinction Capitalism arose, and why it will inevitably lead to global economic collapse. In this second part, I take as stab at guessing what will happen in the next decade.

Forecasting is inherently precarious, and like many forecasters I have a very human tendency to overestimate how quickly things will change, even though my predictions of the end result have been accurate.

I’m going to frame this in the context of my personal situation, just to make it a little less dry. My situation is that I am somewhat comfortably retired on a defined-benefit pension, but I live on a fixed income, and I’m a tenant — I deliberately decided a decade ago to get off the real estate merry-go-round, so I own very little. My net worth is about 18 months’ pension. I’m 70.

When people have to face a whole series of crises one after another, the effect is to keep everyone off-kilter. If we had time to think and organize to respond to dysfunction, we might (it’s debatable) be able to rise up and make significant changes to our political and economic systems to reduce that dysfunction, at least making the crises a bit easier to bear.

But, like in the 1930s, we seem to be entering a time when there is no time to think and organize and change things before the next crisis is upon us. The pandemic, and weather-related emergencies (forest fires, hurricanes, floods, droughts, and other extreme weather events) keep pushing more existential crises like ecological and climate collapse onto the back burner. Chronically poor education and information systems, and large-scale misinformation and disinformation by vested political and economic interests, seriously aggravate our capacity to respond to such challenges. In many places, inadequate, thinly-stretched health care systems, combined with an epidemic of “lifestyle” chronic diseases, exacerbated by the dismal state of public health and nutrition in much of the world, rich and poor, are also taxing and threatening to break these systems.

So our resilience is low — perhaps, due to our utter, global dependence on centralized systems, it’s as low as it’s ever been in history.

Against this backdrop, here is what I think we will have to face in the coming decade:

So those are my predictions. What is probably more important is how we will respond to these changes. Will we be like the boiling frogs, not noticing things getting slowly worse until it’s too late, or will we react, and force governments and corporations to respond?

I don’t think we, or governments or corporations, will do anything significantly different until/unless there is no alternative. But these intriguing actions are possible, maybe even likely, in the next decade:

I will probably be proved wildly wrong in these predictions, but it will be interesting to see. It’s going to be an eye-opening decade, but denial will prevail for this decade at least. It was 1933 before it was officially labelled The Great Depression, and it might be 2033 before it dawns on most of us that the great experiment with Extinction Capitalism was a well-intentioned but ultimately disastrous experiment, and that economic collapse will be but the first phase of a more complete, and permanent, civilizational collapse, over several more decades. No predicting what will happen then.

4 Responses to Extinction Capitalism Part Two: The Next Ten Years