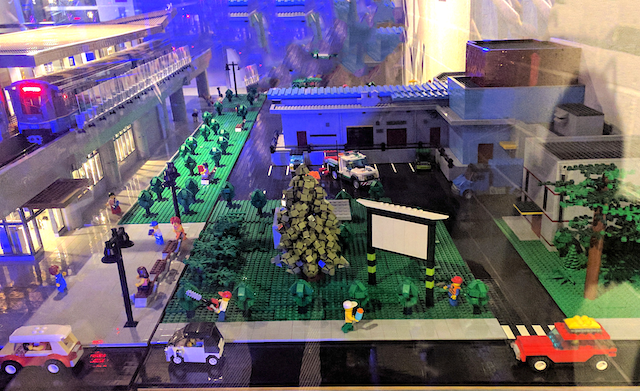 A model of Lafarge Lake Skytrain Station and the Evergreen Cultural Centre in Coquitlam, near where I live, made of 40,000 LEGO blocks.  The model is housed in the building depicted in the centre of the model. It’s a gorgeous model, meticulously created by the Vancouver LEGO club, but it doesn’t need to, or presume to, tell you how the train, the station, or the centre actually work.

The human brain “makes sense” of things by identifying apparent patterns in the signals it perceives, and then by creating elaborate models of how it conceives reality to be, based on those perceptions. These models or representations of reality are then shared with others, and accepted, rejected or amended, to produce our beliefs and worldview. Collectively, these beliefs, and the behaviours that stem from them, constitute our culture.

Part of these models are representations of the ‘space’ and ‘time’ in which the brain’s perceptions and conceptions are assumed to be ‘situated’ — the models just don’t make any sense without such a framework. And then, to make the models ‘useful’, another part of the model is assumed to be situated in the centre of these representations — designated as ‘here’ and ‘now’. We call these essential parts of the model ‘selves’.

The brain doesn’t particularly know or care whether these representations are accurate representations of reality. Its job is just to perceive, conceive, and model — to ‘make sense’, as best it can, of everything it is ‘aware’ of. The most important quality of the model is not its accuracy but its utility. Like a good map, the model doesn’t need to be (and can never be) exact and include everything ‘real’ in it. That would make it impossibly complex, useless and unfathomable. So it simplifies.

That seems to work. The perception of ‘orange’, ‘big’, and ‘fast moving’ leads to the conception of ‘tiger’ and the body quickly responds with a fight, flight or freeze response. The brain adds to the model constantly, so that in the city, ‘orange’, ‘big’, and ‘fast moving’ might be a taxi or a bus. Our instinctive response is modified accordingly, whether we are in the path of the bus, about to step in front of it, or furious that it didn’t stop for us. Pretty good model, no?

No, actually. It’s a really, really simple model. It is ignorant of a million things, from the state of the mind of the bus driver (or tiger) to the state of the bus’ brakes (or the tiger’s eyesight), to the state of mind of the person behind us on their phone who, when we stop quickly, is actually going to bump into us and push us into the bus’ (or tiger’s) path, when, had we kept going instead of stopping, would have resulted, perhaps, in the bus driver, seeing us walking into the road instead of stopping, possibly braking in time. Or in the tiger, not presented with a yelling, flailing body staggering into its path, ignoring our presence completely. Simplified models can be dangerous misrepresentations of reality.

What’s worse, in our brain’s desperate sense for ‘meaningful’ patterns, we can easily come to conceive of patterns that aren’t really there at all, just because we want them to be there — because if they were, it would be interesting, or reassuring, or give us an ‘aha’ moment, or even, if we were the first to articulate it well, our fifteen minutes of fame, or wealth, or power.

And then, having conceived these things, and persuaded others of their veracity, we come to believe them, and make others believe them, and pretty soon you have a whole mass of people believing something that is completely invalid — like our beliefs about immigrants, or gays, or CoVid-19, or trickle-down economics, or strict parenting, or abortion, or the war in Ukraine, or the inevitability of progress, or good and evil, or how to operate education systems, health care systems, or penal systems.

To come to believe these things, we have to develop, or accept, an absurdly simplified model that is nothing more than a conception in someone’s brain — our own or that of someone we trust. And if we want to believe them, we will overlook any evidence or logic that clearly refutes them.

A while ago, I coined what I call Pollard’s Law of Human Beliefs, that goes like this:

We believe what we want to believe, not what is actually true. We want to believe in happy endings, simple answers, the inevitability of progress, self-control, karma, responsibility, destiny, miracles, a proper order of things, the power of love, and infinite human capacity and agency. Most of us want to believe in a higher power that can step in when we falter. We want to believe what those in our circles of trust believe (even if it’s crazy, gaslighting or propaganda). So we tend to seek sources that reinforce those beliefs and ignore those that undermine or unsettle them. Our hopes and expectations are determined by those beliefs. Our worldview is the sum of those beliefs, hopes and expectations, and bears no necessary resemblance to truth or reality. This invented reality is the only way we can  make sense of a world that is vastly too complex to ever make sense of.

Perhaps a corollary of that law is that we will create models, representations of reality and truth that correspond to what we want to believe, for various reasons, and/or what we have been led to believe by others we trust. And we will use these models, and rely on them and defend them, even in the face of overwhelming evidence (which we will ignore or deny) that they are untrue, that they bear no resemblance to the reality they purport to represent.

And by doing so, we will be flirting with incredible danger — of stirring up needless hatred, jealousy, shame, envy, grief, anxiety, or guilt, of starting or prolonging or supporting a fight or even a war, of enabling liars and hate-mongers and sociopaths to acquire power and wealth and oppress others, of traumatizing friends, family, or strangers, of getting people savagely punished, ostracized or killed, of causing injury, loss and destruction, of spreading or perpetuating a disease, or of instigating or enabling any number of beliefs, feelings and actions that cause suffering to ourselves, our loved ones and others.

All because we just wanted to believe, we wanted something to be true, to be “as simple as that”. And we couldn’t help ourselves.

All of the models we employ and deploy so diligently in our work of sustaining and building a society and culture — in business, in child-rearing, in teaching, in politics and law and law enforcement, in economics and finance, in health care, in journalism and book-writing and many other human endeavours — are just rough representations, guesses, opinions, stuff we mostly want to believe is true and simple, when it is often untrue, and when the situation is almost always vastly more complex than we can hope to comprehend.

The idealized model of self-regulating industry produces not social responsibility but climate and ecological collapse. The inspiring model that employs debt, subsidies and marketing to stimulate production produces not prosperity and the promised “perpetual growth” but economic excess, massive waste and ultimately economic collapse.

In short, all of our models are wrong — of necessity they are grossly oversimplified, woefully incomplete, and incapable of effectively determining either the best course of action, or the potentially disastrous impact of their implementation.

But we can’t help ourselves. Our models are the only tools we have. We are trying to do our best.

Even now, we are using absurdly flawed Cold War military models that are blowing up in our faces and risking both economic calamity and nuclear disaster. Even now we are scheming to use geo-engineering to try to stem runaway climate collapse, essentially a Hail Mary shot in the dark, when we have absolutely no idea what we’re doing or what its potential consequences might be. All we have are a few simple models, and a million unknowns.

This is the culture that, with the best of intentions, we have created.

We mistake our models, our guesses, our opinions and our beliefs for real knowledge, and convince ourselves we may, soon enough, know everything. But we know nothing. We’re just fumbling around in the dark, pretending we aren’t clueless, and destroying our planet in the process.

Still, they’re lovely models, aren’t they? Like the LEGO model in the photo, they’re beautiful, they’re fascinating. Even a child can appreciate them. My book, my blog, all the key milestones of my professional career were all about presenting and using new and compelling models. Without our models, we would just be another species of dumb animals, right?

It’s too bad none of our models actually work. But hey, aren’t they great? Look!: intersecting circles, pyramids, cause and effect charts, systems diagrams! It’s all there, everything we need to save the world. Awesome, huh? Now, all we need to do is…

4 Responses to A Culture Built on Lovely, Wrong Models