Understanding Why (Part 2): The War in Ukraine and the Destruction of Mariupol

This is the second of a multi-part series. In this part, I’m going to use the Ukraine War, and specifically the destruction of Mariupol, as a case study of the importance of asking Why?, and moving beyond the rhetoric, the propaganda, the mis- and disinformation, the censorship, and the absurd oversimplification of the narratives the leaders, media and spokespeople of both the west and Russia have (very successfully) shoved down the throats of their citizens about what is going on there. And why. 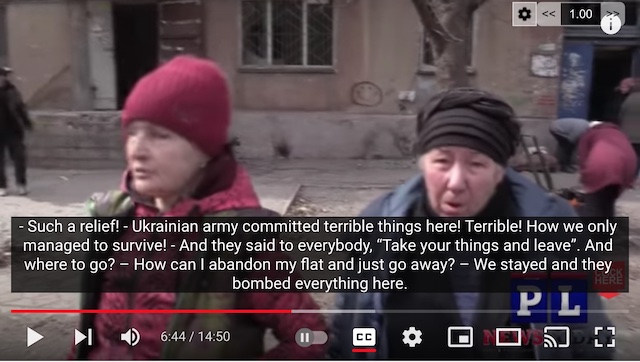 Citizens of the ruined city of Mariupol, walking the streets because their homes have been destroyed or are unsafe to occupy, cook meals on outdoor grills and tell Ukrainian journalist Patrick Lancaster that the destruction of their city was almost entirely a scorched-earth operation by the Azov Battalion, not bombing by Russian forces. April 29, 2022. At the end of the video they beg Patrick not to edit and distort their comments, so that viewers can see what’s really going on there.

In my previous post, I attempted lay out some of the factors, which are mostly more about emotions than reason, that provoke people to launch or support wars. This time I’d like to delve into the emotions (and a bit about the ‘logic’) of the Ukraine War.

If you have been reading the press releases developed jointly by the US DOD, NATO command, the CIA, and the Ukraine government, and dutifully transcribed, mostly without any critical review, by the mainstream media, you have probably been led to believe:

The mainstream media and many of the so-called ‘alternative’ and ‘progressive’ media, have been faithfully reporting these ‘truths’ since the war began, along with photos of the country’s leader comforting troops and civilians and witnessing Russian atrocities.

Before we can discuss why the war started and why it’s still going on, I want to provide some other sources of information about what has been happening in the area over the last decade. This information is entirely provided by western sources, many of them with a long history of working in or reporting on the region, and none of them has been censored (at least not yet) by the western media and social media czars that are now determining what news we receive about Ukraine. None of these sources think Putin was right to invade Ukraine. But they provide a very different perspective on what has happened, in historical context, that might help us better understand why he did it. We’ll get to that in a moment.

And I am not saying that all of the following are true. Some of it may be disinformation, or even propaganda. All I’m saying is that these reports and interpretations are credible, and worth considering in trying to understand the current situation. Articles that I think are the most important to read are boldface, since I don’t expect anyone to read all of them. Thanks to John Whiting, Paul Heft, Caitlin Johnstone and Bart Anderson for many of these links:

If you’ve waded through this list, you might now have at least a fuller and more balanced idea of what has actually been going on in Ukraine. So now come the Whys:

While we can’t know for sure, we can at least make better guesses now that we’ve been equipped with more information about what has actually happened. My guesses start with continually asking Why? — The answers are complex, not simple. And I start with the presumption that everyone is doing what they think is “best” for the people they care about. And then I try to figure out how they got to where they got, and, as a consequence, how the world has rapidly slued to the edge of a global, perhaps nuclear, war precipice.

Here are a few of my thoughts on these Whys:

The institutional focus of CSIS returned to state actors (such as Russia and China) after a February 2021 speech by the CSIS director, David Vigneault, warned that the Chinese “strategy for geopolitical advantage on all fronts — economic, technological, political and military” uses “all elements of state power to carry out activities that are a direct threat to our national security and sovereignty.”

Of course these are only my guesses. We can’t know what any of them are going through. But by trying to understand Why, which starts with gathering different perspectives and information, and getting around the inflammatory propaganda, censorship, mis- and disinformation, I think we can at least start to appreciate the different positions. And from there we can at least understand that there are no “good guys” and no “winners” in any war. And that any peace is better than any war.

I was a peace protester in the 1960s. My Dad helped find homes and jobs for Vietnam War draft dodgers who fled to Canada. I have never cheered the so-called “winner” of any war, just breathed a sigh of relief that the war, at least for a while, was over. I am bewildered that so many of my age cohort are far more outraged about the invasion than they are about the utter absence of any real efforts to bring a quick and lasting peace to Ukraine. And to Yemen and all the other countries still at war, many with our complicity, for that matter.

That’s the question I have no “Why?” answer for. Maybe, there isn’t one.

7 Responses to Understanding Why (Part 2): The War in Ukraine and the Destruction of Mariupol