This is the 14th in a series of articles on CoVid-19. I am not a medical expert, but have worked with epidemiologists and have some expertise in research, data analysis and statistics. I am producing these articles in the belief that reasonably researched writing on this topic can’t help but be an improvement over the firehose of misinformation that represents far too much of what is being presented on this topic in social (and some other) media. 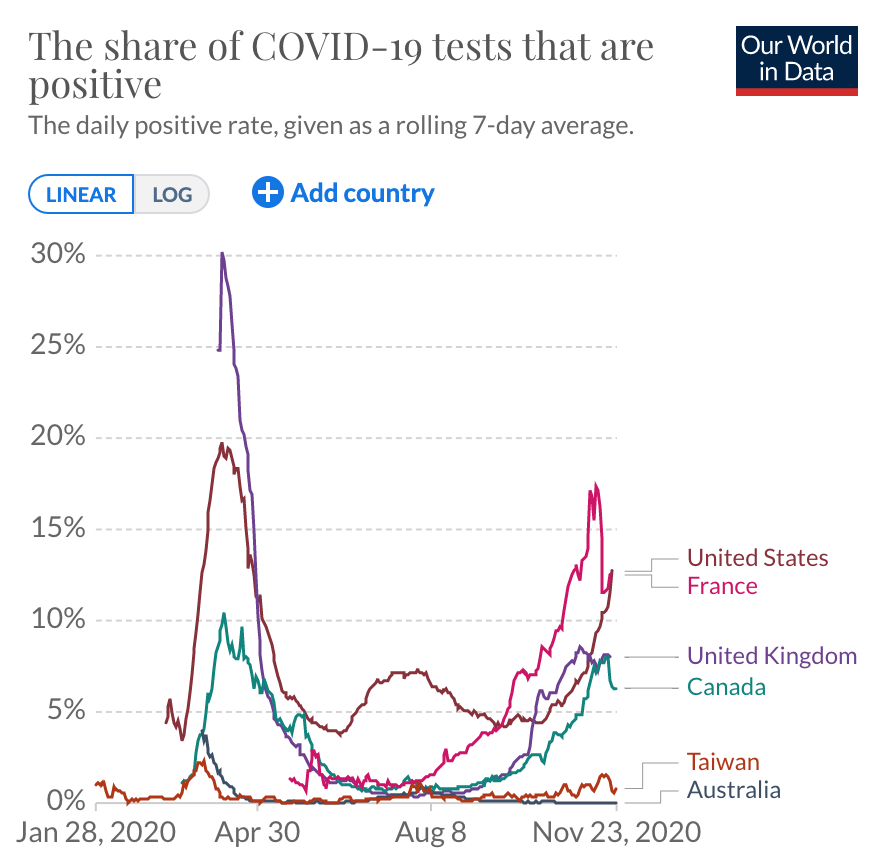 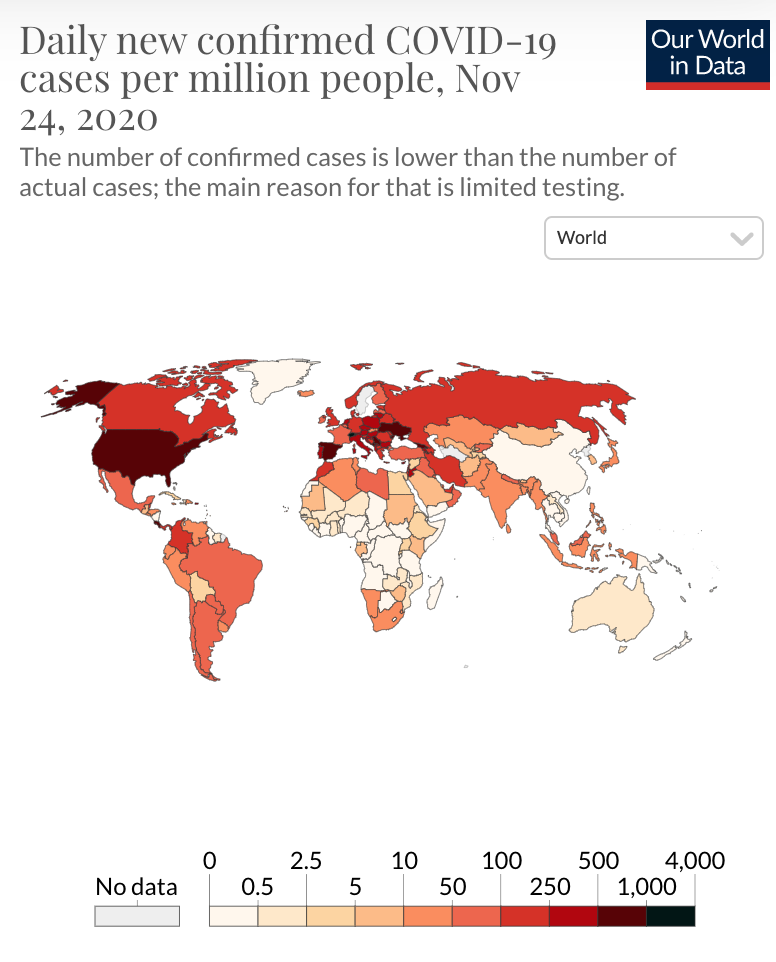 NB: Sweden is a day behind in reporting; its latest report shows 350 cases/day/M (ie should be dark red not grey in map on right).

There has been much talk lately about the wisdom of the prevailing “yo-yo” approach to dealing with CoVid-19 — relaxing restrictions when cases, hospitalizations and deaths drop, and reimposing them when they rise to “unacceptable” levels.

The only reason this utterly failed policy is still being used in North America and Europe is that governments and public health organizations have been paralyzed by fierce antipathy to government, antipathy which has been repeatedly churned up since the 1980s by fear-driven conservatives and by uneducated citizens prone to believing fear-mongered conspiracy theories about “evil” governments.

So governments and health authorities are reluctant, even fearful, to impose any restrictions on the public until and unless the crisis reaches catastrophic levels. The violent knee-jerk responses of the right to even the modest restrictions that have been imposed (eg widespread death threats, occupations by heavily-armed right-wing “militias”, the blossoming of QAnon and other lunatic fringe anti-government conspiracy theory cults, and the attempted kidnapping and coup in Michigan), suggest that governments’ fear to act decisively is not entirely ill-founded.

As a result of this absurd policy, 11,000 Canadians, 275,000 Americans and nearly 1.5M people globally have needlessly died, and the pandemic is now spreading faster than ever.

In Canada, as a result of the use of the yo-yo strategy, as Andrew Nikiforuk reports, “hospitals in Alberta, Manitoba, Ontario, Saskatchewan and Quebec are almost overwhelmed, long-term care homes have once again become deadly hot zones, and a nation that committed $4 billion to be able to conduct 200,000 tests a day still struggles to do half that”.

The only viable alternative to the yo-yo strategy is a go-for-zero strategy, which has been successfully deployed in the so-called TANZANC countries (Taiwan, Australia, New Zealand, and Atlantic & Northern Canada). These democratic countries have essentially eliminated CoVid-19 within their borders, put in place stringent measures to prevent its re-emergence, and hence been able to restore “normal” life, and seen their economies quickly rebound as a result.

The Australian Grattan report shows what would be required for any democratic country to achieve similar success:

I can imagine the QAnon crowd getting apoplexy just reading this list. But it works. It has saved thousands of lives and enabled quick economic recovery in areas that have had the courage and resources to implement it.

What would it take to implement it in other areas? Obviously the more out-of-control the virus is in an area, the longer the lockdown and the greater the challenge. In most of the US, interstate border crossings are impossible to restrict and the resources simply don’t exist, so it wouldn’t be possible even if cases weren’t already 100 times or more the target 3/day/M rate for achieving the go-to-zero benefits. Maybe in Vermont and Hawai’i.

But in Canada, despite the upsurge, it’s still feasible. It took Victoria state in Australia nearly 2 months to reduce their spike from 80 cases/day/M back down below 3 (and it’s now zero on most days). So Canada could probably get its 120 cases/day/M down to below 3 within 90 days (by Feb 28) if we followed a national, strict, Grattan-style go-for-zero strategy.

If not, IHME projects the Canadian infection rate will soar to 360/day/M and nearly 30,000 more Canadians will die by that date, which is likely the earliest that a vaccine will start to be available in sufficient quantities for the population at large. A go-for-zero strategy could save 90% of those deaths, 27,000 lives. Not to mention the unknown long-term damage to those infected, and the strain on our hospitals and other institutions. Is that worth a 90-day lockdown? I would say so.

Probably the most important question (since Canadian and other governments know about this strategy and have refused to implement it), is whether CoVid-19 will teach us the lesson that this is the way to go next time. The next pandemic is surely coming, and while governments shrugged off the threat of SARS and MERS ten years ago, the number of pandemics per decade is accelerating as factory farms proliferate, and as exotic animal harvesting and encroachment into the world’s last wilderness areas grows exponentially. A pandemic with the transmissibility of CoVid-19 and the morbidity of SARS or MERS would (will?) kill billions. When it hits, we cannot afford to be unready. And unless trust in government and public health institutions in most of the world’s democracies can be restored, we will not be ready.

3 Responses to CoVid-19: The Go-for-Zero Strategy