Even Simpler and More Hopeless Than That 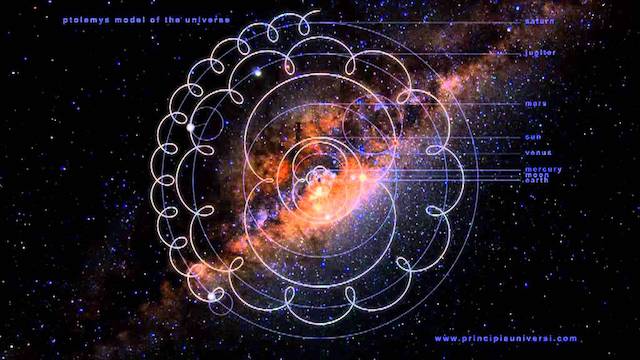 I‘ve always had a deep-seated, intuitive preference for explanations and theories that are at once simple (“a theory should be as simple as possible, but no simpler” as Einstein possibly said), and complex (not mechanical or reductionist, and respectful of the impossibility of complete understanding, and appreciative of the inextricable interrelatedness of all things).

Since I was a child I have been intrigued by the effort of scientists and philosophers to come up with a compelling explanation of the nature of reality, and why every new theory seems unduly complicated, dubious, and unsatisfying.

Part of this, I suppose, is my inherent skepticism of convoluted theories (like string theory), which remind me in their earnestness of the 16th century Ptolemaic anti-Copernican models of complicated circles circling around other circles around earth, to refute the simple but then-outrageous truth of a heliocentric solar system.

Part of it is something inside that somehow ‘remembers’ when everything just made sense as it was, and which found the subsequent vehement teachings of tortuous and labyrinthine alternative explanations for the way things are, to which we are all subjected from early education until we die, so utterly absurd. When I heard these assertions, about morality, about mortality, about progress and struggle and creation and purpose and human nature and later the nature of time and the universe, I kept saying to myself: “Is this just a joke that they’re soon going to let me in on, or do they really believe this preposterous nonsense, and if they really believe it, why?”

So it’s not surprising I suppose that I’ve taken a liking to the message of radical non-duality. It’s the simplest, and most outrageous, “theory of everything” I have ever studied. It is unprovable, and irrefutable. It is utterly useless, and, for those looking for something useful or better than established models old and new, totally hopeless. It’s just this:

There is no you. The sense of a separate person with free will and choice inhabiting a body is an illusion, an evolutionary misstep, a psychosomatic misunderstanding that arises in creatures with large brains. The brain and body have no need of a ‘self’ in order for the apparent human they are seemingly a part of to function perfectly well. Since there is no you, there is nothing you can do or learn or become to dispel or see through this illusion. It’s hopeless.

Nothing is real. Nothing is separate. There is no thing. There is only this (or everything, or whatever word you want to use), appearing as things and actions in (apparent) time and space. These appearances are not illusions like the self, and they’re not real, or unreal; they are just appearances. Inexplicably. For no reason or purpose.

That’s it. That’s the message. Everything else that radical non-dualists talk about is just an elaboration, an illumination, of the essence and consequences of this simple, hopeless message. There are lots of terms that can be used interchangeably with ‘you’ and they are all describing the same illusory thing: the self, contracted energy, the individual, the person, the seeker, the experience (of seeking etc), the experiencer, separation, knowing, understanding, the dream, the dreamer, ‘I am’, the story of ‘me’, consciousness, awareness, duality. All just a dreadful illusion.

There are lots of terms used to describe things that the self believes are absolutely real, but which are simply appearances ‘out of nothing’: time, space, distance, objects, position, meaning, purpose, intention, need, perception, beginning, end, life, death, events, result, cause, free will, choice, control, agency, change, right and wrong, responsibility, thoughts, feelings, sensations, continuity. These are not illusions, but neither are they real. They are just appearances. (I would add “Enjoy the show!” but the self can’t see these things as just wondrous appearances, so it is doomed to ‘miss’ the show, and to be hopelessly unhappy seeking to solve its apparent unhappiness and struggle.)

Not much more to say about it. It’s an elegant, totally internally consistent message. If there is a remembrance or a glimpse of a moment when there was no ‘you’, this message may be intriguing, or even very compelling. Otherwise it will probably just make no sense. Even when, as I think will happen in this century, scientists and philosophers start nodding that this message really does best describe the nature of reality and of human nature. Like Copernicus’ heliocentric model a mere half-millennium ago, it is just too outrageous.

2 Responses to Even Simpler and More Hopeless Than That