The Needs of the Moment 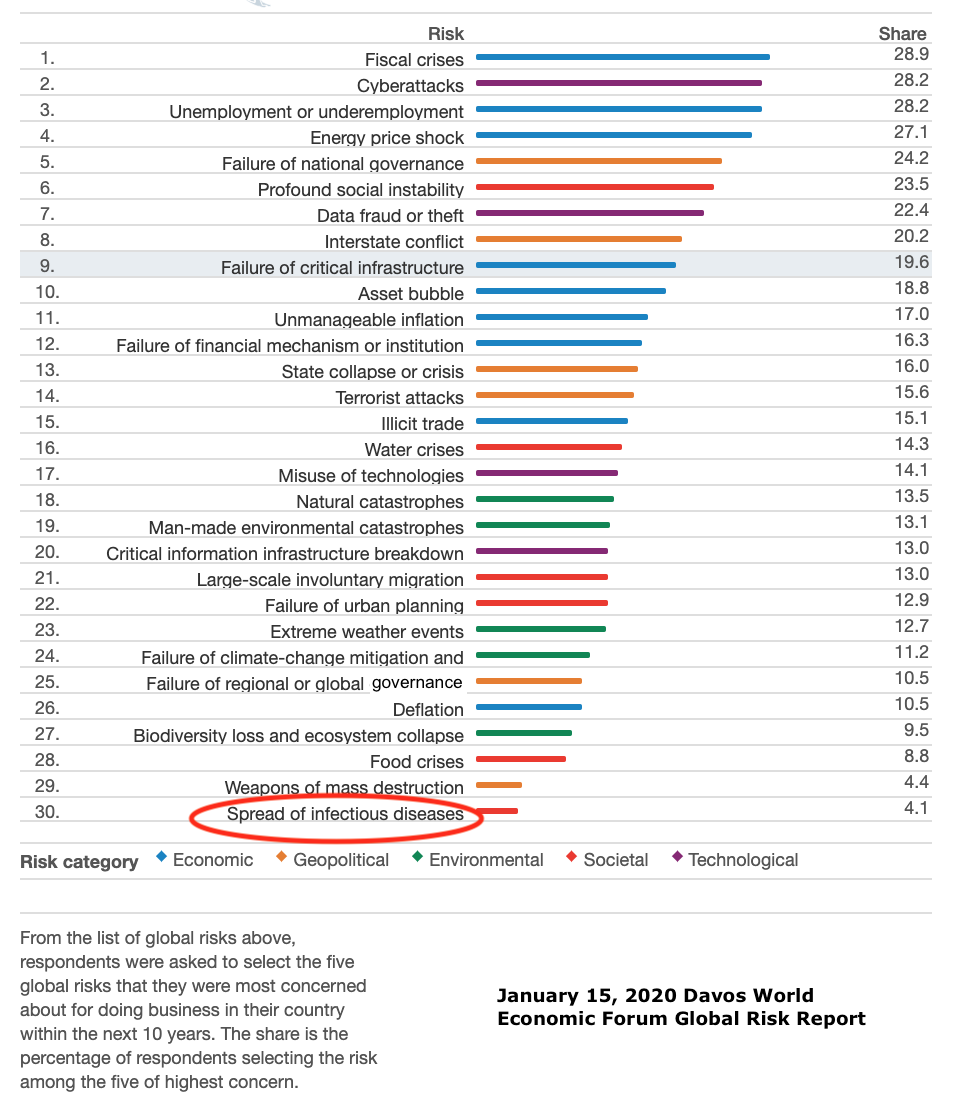 Business ‘experts’, who probably earn million dollar annual salaries for supposedly knowing all about their businesses, were polled by the WEF for the January 2020 Global Risk report, and asked to rank 30 risks in terms of their expected impact on business in the 2020s. Note which risk, just a few months ago, they ranked dead last.

Much has been written about the parallels between our inadequate planning for, and response to, pandemics, and our inadequate planning for, and response to, climate collapse, ecological collapse, economic collapse, earthquakes and other natural disasters etc. Most of the writing has been of the “We told you so” (I actually did, in 2007), or “This is our wake-up call — we need to be prepared for all these things” variety. They may be right, but they’re not particularly helpful.

I think it might be time to acknowledge that it’s just not in our nature, or capacity, to plan for crises in advance. As John Gray puts it in Straw Dogs: “The mass of mankind is ruled not by its own intermittent moral sensations, still less by self-interest, but by the needs of the moment. It seems fated to wreck the balance of life on Earth — and thereby to be the agent of its own destruction.” And past civilizations have seemingly been no better prepared for crises than ours is today.

Of course, if we’re persuaded the risk is both imminent and enormous, we will go through the motions of preparing, at least until the perceived risk seems to be further away, or potentially less catastrophic, after which we slack off and our preparations are largely forgotten. During the Cold War, fallout shelters were popular, but they were designed to appease frightened citizens, not to actually work. Governments have hurricane, tornado, earthquake and other disaster plans, but acknowledge that they have in past done little to reduce death and destruction, and they are likely completely inadequate for “the Really Big Ones“. The massive and enduring American DHS apparatus put in place to address the threat of “terrorism” (ill-defined but “we know it when we see it”) has been astronomically expensive and substantially worthless, possibly the worst project in terms of value-for-money in risk reduction in all of human history.

Preparing for what is inevitable but too far in the future to predict (location, timing or impact) is just not what we humans do — we’re not inclined to do it, and when we do, we do it badly. I worked for a brief period in pandemic monitoring and preparation after the SARS epidemic, and it was eye-opening. We knew what would be required to prevent a future pandemic, but acknowledged that those with the authority and resources to make it happen were not prepared to do so, and that we kind of understood why.

We knew that closing airports and otherwise trying to isolate a highly-contagious disease simply doesn’t work. And that getting institutions and individuals to stockpile PPE and practice using them properly would be as unpopular and impossible to enforce or sustain as the fallout shelter movement. Humans rarely do things “just in case”. The precautionary principle has never really prevailed anywhere in human enterprise. For us to order and maintain billions of disease test kits, and to maintain the infrastructure needed to process the test samples promptly when pandemics struck, was never even a prospect, even though it would be (relatively) inexpensive. It just seems premature, unnecessary, or over the top, until of course it actually happens.

It is possible that we may change our pandemic preparedness for a short while this year, especially while the risk of additional waves and mutations remains so high. We might even be as ready as the Taiwanese and South Koreans for the kind of pandemic we are now facing (though that’s doubtful — too expensive and too inconsistent with our western culture to tolerate this level of government intervention at at time when cynically sowing distrust of everything governments do has become politicians’ favourite maneuver).

But what happens when the vector of transmission next time isn’t from a pangolin or other exotic mammal to a single human and hence, one by one, to a tenth of the human race (which seems to be what happened so far this time around). What happens next time if  the mortality rate isn’t a mere “acceptable” 0.35%? (That’s 2-3 million deaths worldwide first wave; total for all waves perhaps 10x that number depending on continued social distancing and time to inoculate the world with an effective vaccine.) What if next time, or next wave, the mortality rate is 3.5%, or 35% (not unheard of with some viruses)?

What if next time (as epidemiologists tend to believe is more likely) the vector is an H5N1 or H7N9 (ie a non-corona) virus spreading through the 24 billion chickens or the two billion pigs kept in the world’s ghastly factory farms, and then crossing the species barrier from all those dying farm animals to humans? What if, like the wave 2 H1N1 virus in 1918, or the H1N1 “swine flu” pandemic of 2009, the next virus is the type that incites a cytokine storm response in humans, and hence primarily afflicts the young and healthy with strong immune systems instead of the old and compromised?

None of these “what ifs” is highly unlikely, especially given the mutability of viruses and the massive concentration of both humans and farmed animals on our planet. We are prepared for none of them. And we won’t be, even in a couple of years when we start to forget CoVid-19.

It’s simply not in our nature to prepare for unpleasant events (death, divorce or disaster) far in advance, especially if the risk of them happening in the immediate short term is perceived to be low. Just this January, when CoVid-19 was already starting to make the rounds, the gnomes of Davos in their annual Global Risks Report made almost no mention of pandemics as a risk, and business leaders surveyed rated pandemics dead last, the lowest of 30 risks of concern for the 2020s (see chart and link at top of this post). And they made no connection (in their risk interconnectivity chart) between pandemic risk and economic risks. Hard to imagine an assessment being more staggeringly wrong so fast!

Yet it is understandable. Although the 2009 swine flu killed about a half million people worldwide, most of those people were children and young people in struggling nations with suspect data. And it was more than a decade ago. Who can remember? What has that to do with the needs of the moment, here, now?

Here, now, we have to keep our jobs, manage our homes and savings, feed and clothe and educate our children, manage our relationships, protect our companies from fraud, theft and sabotage, worry about whether exploding inequality will lead to political destabilization, “domestic terrorism”, or even insurrection thanks to incompetent and incendiary populist governments.

Who has time or energy to worry about climate collapse, ecological collapse, economic collapse, earthquakes and other seemingly-remote disasters, when these more personal and immediate concerns are haunting us? We have some control over our personal and our business’ challenges, but none at all over these more nebulous, global crises, so we vow to pay more attention to them when we retire. We’ll encourage our kids to protest, and tell them they have our support, but for now we’re too preoccupied with the urgent needs of the moment to join them. Give us a break!

Because we are fixated on the needs of the moment (which has generally been a good evolutionary strategy, except when things have suddenly collapsed), we are not going to do anything to prepare for any of these larger, seemingly uncontrollable and hopefully improbable crisis. We may even acknowledge that we should. But we won’t. And we won’t elect governments that will do anything to prepare or mitigate these crises either — we don’t trust them to do so, we don’t think we can afford to pay for any more government activity, especially when the costs of climate action (and inaction) are measured in the trillions of dollars, and we don’t think even well-meaning elected officials and public servants can really make a difference anyway.

There has been a lot of cautious enthusiasm that, once we learned that it was seemingly possible, at least in the short run, to drastically reduce carbon emissions and our use of hydrocarbons, to give everyone — everyone! — sufficient money to avoid hardship, to operate our economy without the need for commuting to and from horrific workplaces and dysfunctional schools, then maybe, we wondered, we can do more than we thought to change our lifestyles, and even do so permanently. No?

Even the health of our most valued relationships, frayed from being forced into close quarters for long periods of isolation, we fear, depends on that. All of these things that we depend on, depend on the global industrial growth economy, on “business as usual”. Whether we want to admit it or not (as we frown sheepishly at the armed right-wing gangs “occupying” statehouse steps and offices demanding an immediate return to “normality”, expressing their fear rather more baldly than we do) — these are our needs of the moment.

The Ponzi scheme called a stock market has already completely recovered from the 30% drop after the pandemic hit, already pricing in a fast and “full recovery” to business as usual (get ready for a roller coaster, investors). Anything less would be unthinkable. If we want to dream about guaranteed annual income, about 20-hour work-weeks, about clean skies and water and a shift to a renewable energy economy, about changing the way we raise animals for food, we can do all that, later, when these needs of the moment are met.

There will be, there must be, time later to worry about climate crises, ecological crises, economic crises, and preparation for disasters like earthquakes and pandemics. We have to believe that. But they are not the needs of the moment, right now. Now is not their time.

And when their time comes, we will not be ready. We will be dismayed, angry, grief-stricken. No one told us this might happen, and so soon! Who’s accountable for this? Who’s responsible? It’s not our fault, we were just looking after the needs of the moment. La la la la la la I can’t heeeeear you!

It is, after all, no one’s fault. No one is to blame for the combined impact of 7.8B people each looking after their immediate needs. This is our nature, and has always been. It will lead to collapses, halting and tentative and then deeper and cascading, as it always has. And then what is left of life on earth, after this sixth great extinction, will, with or without any humans, pick itself up and start again. As it always has.

1 Response to The Needs of the Moment