Tim Cliss at the “Nothing Conference” 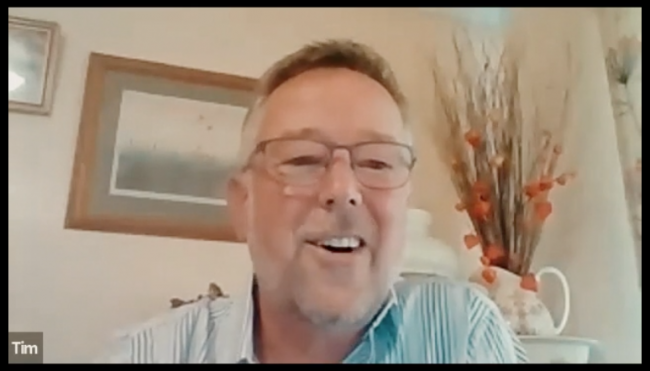 Following are some edited excerpts from Tim Cliss’s recent talk at the Nothing Conference, which brought together (on Zoom) many of the other leading speakers on radical non-duality, including Tony Parsons, Jim Newman, Andreas Müller, Kenneth Madden, Frank McCaughey, Richard Sylvester, Nancy Neithercut, and Lisa Lennon. (Of my favourite speakers on this, only Rosemarijn Roes was absent.) Thanks Tim!

There’s nothing significant to say about this. The self brings judgements and conditions to what is just life happening. Nothing is more significant than anything else, including the words spoken at this conference. It might sound as if there are human beings here with special knowledge and special insight and special understanding. There are not.

There’s something about the nature of self that it feels flawed but longs to be special. Freedom from that is what we’re talking about. Freedom from the need to be special, or to be “fixed”. There is no one to be fixed, no one who’s faulty. Humanity doesn’t need fixing. Nothing is inherently wrong — there really is no right or wrong. But there’s nothing wrong in judging what’s right or wrong either.

This isn’t about becoming purer, more spiritual, higher or deeper. You are just as you are — it’s just that there is no “you”.

I didn’t become awakened. There isn’t anyone who’s awakened. It’s not like you go from being a self to being a no-self. There is nothing, no one to recognize “no-self”, or to recognize “awakening”. There’s just space where self used to be. There are still memories, and perception is the same, feeling and emotions and seeing and hearing and thinking and thoughts and stories are the same, beliefs are pretty much the same. They’re just not “mine” anymore. They never were, but I claimed them as mine, and so they seemingly became really important. Freedom from them being “mine” is freedom from all the weight they have to the self. When they’re not “mine”, they appear and then they disappear, simple as that.

In the story of Tim there was great suffering and longing to be free from suffering, which is common among seekers who end up at this “last chance saloon” [radical non-duality]. If you’re here you probably tried a lot of other shit. But the “me” can’t just give itself up. “I am” is self-preservation. How does the self stop appearing? — I have no idea. To say it’s through suffering or pain or anything else is just another story. There’s no more cause for it than there is for anything else.

There is no “before” to cause or create anything. Even “this” doesn’t exist. I talk about “this” because I haven’t got a better word for it. The fact there is no cause for anything is endlessly frustrating to the seeker, who wants to know how the apparent human speaking about this “got here”. You don’t come to this. There’s just this.

There is an appearance of cause and effect, whether there’s a sense of self or not. But here it’s obvious that there is nothing that happens “before” something else that could then cause something else. When time loses its effect, cause and effect just become a story — one you can still tell without any problem, but it’s much lighter because it’s not real. The feelings (guilt, anxiety, anger, blame etc) that arise from the sense of cause and effect — “I/you caused that” or “This would cause that” — is really the essence of most suffering. All of these come from the sense that time is an absolute reality, and it’s not. So “it appears that she did that and that caused that” and I’m angry about it — that will still be the case, but it’s now seen as just a story. Your neighbour will have another story about it. Cause and effect are just stories we tell.

I thought that after liberation my latent creativity would be fully expressed. Instead, there was nothing. It was just a lovely fantasy. There really isn’t a future “waiting for you”. There’s just what’s happening.

There isn’t an “experience” of oneness, or at least, that is not what is being spoken about here. This is emptiness. Life is exactly as it is, everything free to appear as it is. This isn’t what you’re looking for. You won’t lose all the bits of your life you want to get rid of and live in “bliss”. “Liberation” is just the best of the many words (like awakening and enlightenment) available to describe this. There is no one to awaken, no one to be enlightened. And there is no one to be liberated, but there is freedom from all the parts of you that you thought were wrong — the dirty, shameful bits.

This is ordinary magic. Our knowledge makes this amazing, extraordinary life mundane. As soon as you know, the magic is lost. This message is all about not-knowing. In the not-knowing, everything is magic. And you don’t really know anything anyway — you delude yourself that you definitely know, and everyone else colludes with you. The audacity and arrogance of the self’s knowledge is extraordinary. And that’s what kills the magic. The magic is everything; it’s not hidden.

Self and knowing are the same illusion. Not-knowing doesn’t mean the loss of what you thought you knew; it can still be recalled — you don’t know any less. You just don’t believe that it’s knowledge anymore. It’s just a story, that we know this stuff. We don’t know anything.

It’s tricky to talk about this with old friends who’ve known me as a “normal” person. I tell them that I now speak and write about non-duality, and they ask “What’s that?” And I say that it means there’s no self and there’s no time, which usually stops the conversation dead, and that’s a good thing really. Any further and they might get angry with me. This message is only for those who “have ears” [who are ready to hear it]. Others just won’t, and can’t, hear it.

When there is no longer a self, there is no one to notice that there is no longer a self. But even that can’t be known. There’s just no noticing. If the noticer, the “I am” stops appearing, who’s to notice? That’s all we’re talking about. That illusory separation — in a way it’s subtle, imaginary. There really isn’t anything to notice. The thing that is noticeable is the absence of the seeming symptoms that “I” used to create. Particularly the thinking about oneself and everything being in relation to what it means for “me”. All the “self-conscious” thoughts. So “In the absence of Tim there was no one to notice the absence” is the best I can do, but even that’s not true. Because that suggests there was an absence, and there wasn’t an absence, because the one that’s not there was just an illusion. Nothing was lost.

There are no rules for how the apparent falling away of the self affects apparent relationships. If the “me” behaved in a dominating manner, that may seem to have a radical effect on relationships. Some fear that without a self they will lose all their relationships. Maybe. That’s the only answer to questions about the [non-existent] future.

This message has been spoken about for millennia, by St Thomas for example — it’s always been here. But because of the cultural differences in the past, it was necessarily communicated very differently and could well come across as a different message.

On the question of free will — there is no sense here of destiny or predestination. “The movie’s in the can” doesn’t sound like freedom, and the sense here is of absolute freedom, wild chaotic anarchy. Even what appears calm and consistent is wild and free. There are no outcomes. Even a memory is just a story. There isn’t a past or a future [so there can’t be anything predestined]. There is just this. Free will, choosing, is just an appearance, and only refers to the one who has it, and there is no one to have it. It looks like choosing, but there’s no chooser.

There can be intense disappointment for the end of all your dreams and hopes. There is no one to fulfil them. There’s intense sorrow; you may sob for months. You’ll laugh about your dreams, but there will also be sadness; there’s loss, after all.

There’s also the obviousness that this is utterly alone. The possibility of “knowing” another, of “completion” with another person, is lost. Just as there is no self, there are no others. The aloneness of this can be a sublime sadness. But this aloneness is what’s been longed for; it’s just not what “me” has longed for. It’s very hard to convey. It’s love and melancholy in equal measure.

This message has nothing to do with happiness. Feelings are free to appear, neither right nor wrong, neither positive nor negative. This is completely alone, but it’s the end of the possibility of loneliness; loneliness is for “me”.

3 Responses to Tim Cliss at the “Nothing Conference”