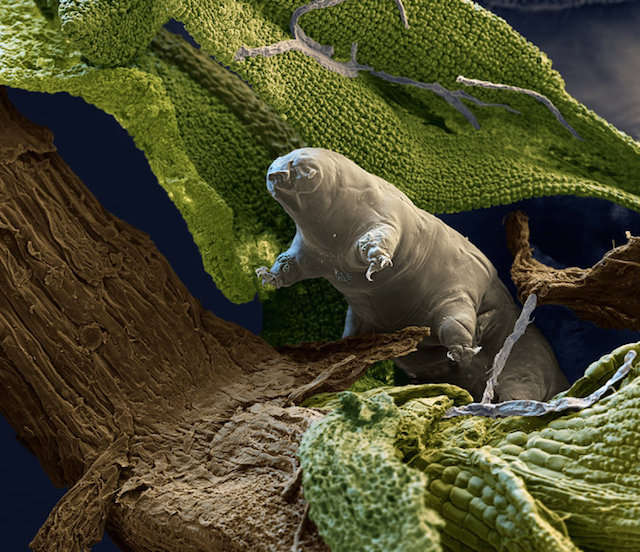 microscopic photo of a tardigrade, a recently-discovered clawed bear-like aquatic creature about 1/16 of an inch long, that has been found thriving everywhere, including places of extreme cold and pressure; in poor climates they self-dehydrate to tiny condensed size and can hibernate, seemingly indefinitely, until they bounce right back when conditions improve; calling Dr Seuss!

You can’t see it,
though it’s all around you.

You can’t see all the colours and wavelengths
beyond the narrow human spectrum.
Look, here: a dazzling profusion, a cacophony of light,
but you don’t notice.
There are no words for all that is right here, invisible to you.

You can’t see the context,
what the wren’s flight, the monarch’s flit from flower to flower,
looks like from space.
The forest and the trees, as one.
It’s too far away from you.

You can’t see what that tiny thing looks like
up close, magnified 100 or 1000 times.
Move closer and you might almost see its eyes,
its claws, its hungry mouth,
almost feel its living breath on your dead skin.

If you could get even closer
you’d see that it’s mostly just space, mostly
nothing at all.
And then if you could move even closer
and look at the parts that aren’t nothing
you might see that they are mostly nothing too.
If you could get infinitely close
you would see something astonishing —
that all there is is the space between.

You can’t feel the unfathomable hive
of trillions of creatures inside this body
that you nonetheless call “yours” —
trillions all knowing what to do,
all doing what they do to keep you, apparently, alive.
How can you be so ungrateful, so unaware?

You can’t taste the long-hidden anger and fear
of the glassy-eyed man walking into the voter’s booth,
or the sap in the needles of the fir tree,
a thousand years old,
just fallen beneath your heavy feet.

You can’t smell the difference between yesterday’s rain,
that came from the north, where the factories are,
and today’s rain, from the west,
with the molecules of the prey scattered by the closing shark’s jaw,
and the hint of new hibiscus blooms.

You can’t perceive the pheromones speaking to your body,
telling it what is wanted.
Your body knows. It listens and responds, laughing.
But you cannot hear.
You still think you’re in control.

You can’t conceive that there is actually no time,
that everything that is happening
is at once immediate, eternal, and spontaneously, wondrously new.
Break down what appears to be separate moments
and discover they are just the brain’s place-holders,
an imagined categorization scheme,
a feeble, musty library catalogue of what the brain thought,
for a moment, were meaningful patterns.
Look between the moments for the Now
and discover there is no space between them,
no moments, not even Now.
Where did they go?

It’s all right there in front of you,
but you can’t see it. It’s a secret
you can never know.