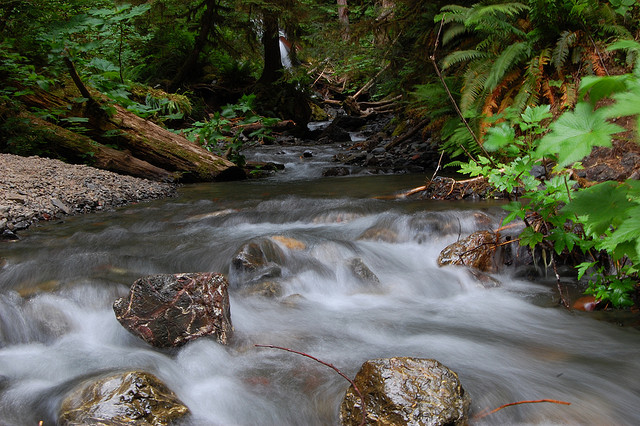 “Hear that? That bird just said ‘So now what?’ Awesome!” Rafe pointed up at a nearby tree.

Daria had found a clearing beside the stream not far from their regular forest path, and Rafe had quickly stripped and was splashing about in the stream. Daria was sitting on one of the cushions they’d brought, her feet dangling above the water.

“That’s a grosbeak”, she replied. “They say a lot. If you could make out a ‘So now what?’ in that essay of a song, you, my friend, are guilty of excessive patterning. You can probably see a prophet in that cloud, too”, she added, pointing overhead.

“Well, actually, yes. At least he has a prophet’s beard.”

“I rest my case. You’re asking ‘So now what?’, not the bird. The bird knows ‘now what’, and isn’t particularly concerned that you don’t. You want to know ‘now what?’? Watch the bird, don’t listen to her.”

Rafe gave her a raised-eyebrow scowly unconvinced look. “It’s such a long and wonderful song, it must be telling us something.”

“It’s telling us life is complex and unfathomable.” She laughed at him, pulling off her shoes and dipping her feet into the stream, splashing him as she raised them back up.

Rafe fell back into the stream trying to avoid getting splashed. He sat there for a moment, and then said “She only needs a note or two to convey that. What is all the rest of it saying?”

“That she is complex and unfathomable and therefore she is joyful and excited to be a part of it. A good mating call message, I would think.”

He laughed. “Wow, I wish I could find a mate that wise and self-aware!”

Daria tossed the second cushion at him, which he caught before it hit the water. Rafe towelled off, plunked the cushion down and sat beside her. They listened to the birds, the wind through the trees, the happy gurgling of the stream.

Rafe broke the silence, speaking slowly and quietly, sighing: “So… now what?”

“Watch the birds. Pay attention.” She stripped off the rest of her clothes and turned to kiss him. They kissed for a while.

“So now I know that ‘I’ don’t exist”, he said at last. “That there is no self. No ‘thing’, in fact. There are only processes. The scientists and philosophers now agree. Even time is an illusion, an invented construct so our poor overwhelmed brains can sufficiently simplify reality to make sense of it usefully. I know this, yet I feel and act as if nothing’s changed.”

“Nothing’s changed”, she replied. “You are who, or what, you are. It’s the only life you know. The only way you know of acting and responding and being. You do OK.” She smiled at him.

“It’s like I’m one of the characters in Plato’s cave. Imprisoned in place and able to see only shadows. But suddenly I’m told, and it makes sense, that there is another reality out there, a real reality. I want to see it.”

Daria rose and started paddling in the stream, doing impromptu dance and gymnastic moves. “You can’t. You’re imprisoned. You want to fly like a bird, too, you keep saying. You want to be a bird. Not happening. Be who you are.”

He sighed. “Yeah, I guess. I’m such an idealist. Too many years daydreaming of what could be, of what I could be. Who I am is that gentle scared kid locked inside my head peeking out longingly.” He stood up and leaned against the closest tree, watching her. “I feel like I’m running out of time to really see.”

Daria stopped dancing and stretched out her hands to him, inviting him into the stream with her. They danced in the water, closely, slowly. He watched her face, the reflection of the sun in the water sparkling across it, and the shadows of the leaves as she turned.

“‘Really seeing’ isn’t something you learn”, she said. It’s not a skill, it’s a way of being. You’re not that way. You’re pretty amazing, Rafe. You’re intelligent, imaginative, caring. You’re incredibly fortunate. You’re healthy. And you’re with me.” She gave him a wry smile. “That’s enough, if only you would let yourself be, and stop dreaming of being something else.”

He held her tight, lifted her up, and sighed. “That’s just it. I can’t stop dreaming. What I am and what I feel and what I can see is not enough. I feel as if my way of being is not being at all. It’s a shadow life, a life imprisoned, no matter how comfortable the prison’s decor. I want to be free.”

She wrapped her legs around him and they stood like that, in the water, his face buried in the lovely soft skin of her body. She lowered her face to his hair, and whispered close to his ear: “Then be who you are. Really inhabit it, experience it. Live it. I’m guessing if you could really do that, it would be enough. You would no longer be restless to be otherwise. You would be free. You would be connected. You would discover how perfect you are.”

He walked to the side of the stream and set her down, gently. He spread out the towels and lay down with his head on one of the cushions. “So how do I do that, oh lovely all-knowing-one?” He smiled to let her know he was teasing.

She lay beside him, her head on his chest. “So”, she began. “First of all, you stop trying to be otherwise, stop trying so hard to be who you’re not, to change. Sense. Be still. Watch. Listen. Let it all fold over you. It’s doing that anyway, so might as well notice it. Let go of trying to be everything you’re not. Breathe. Try not to think so much. Dare to really feel. Just as you’ve discovered your ‘self’ and time aren’t real, realize your fears aren’t real, they’re just constructions around the ancient flight/flight/freeze instincts that don’t actually make sense.” She rolled over on top of him, bracing herself on her arms so she could look into his face. “Nothing to be afraid of.”

“Wow”, Rafe replied. “Seems hard, impossible. You can really feel all that?”

“We’re not talking about me. I’m not you. No one has any answers that work for everyone. We’re all different. I’m just guessing, trying to help, suggesting things that might help you get out of the mental box you seem to have locked yourself inside.” They just looked at each other for a while, and then Daria added: “Kali was right. All those gurus who claim to have achieved enlightenment are just charlatans, just trying to figure out what to do themselves, and trying to make a living at it while they’re at it.”

She was crying. “I actually have no idea what you should do.”

He squeezed her. They were silent for a while until her sobbing ceased. “So what about you, then. What’s your existential crisis. Maybe I can help you by guessing at some answers.”

She sighed. “I think I’m kinda past that. Don’t believe in answers. We love who we imagine each other to be, since we can’t really know. It’s enough that you love me, that you care. I’m not looking for answers. As the bird told you, we all heal naturally, if we give it time and help the process. You’re a big help.”

“I wish I could speak grosbeak. I’d sing my complex and unfathomable love to you. We could just sing it back and forth until all the world knew.” He rolled her over and kissed her, then started sliding down her body, light feathery touches and kisses.

“Wow, Rafe, I’m still a bit sore from our marathon this morning. You’re incorrigible, you know.” He ignored her protests, moved lower. She gasped. “Damn, you know I can’t say ‘no’ to you. And it is kind of sexy out here in the woods.” They made love slowly, gently, as the shadows lengthened across their bodies.

During an intermission, Rafe said: “This is one way I try to show you how much I love you, that I care. Showing is more important than telling. How else can I show you?”

Daria replied: “It feels good just being here with you. You feel good. Just right.” She thought for a moment and then added: “Despite how much you feel you’re caught up in your head, you’re actually very generous. You show me love by a thousand small acts of kindness, attention, appreciation, noticing. You make space for me. Just keep doing that.”

She looked down at his face smiling at her from between her legs. And laughing and pointing at him, she added, “And just keep doing that, too!”