This is a work of fiction. Really. 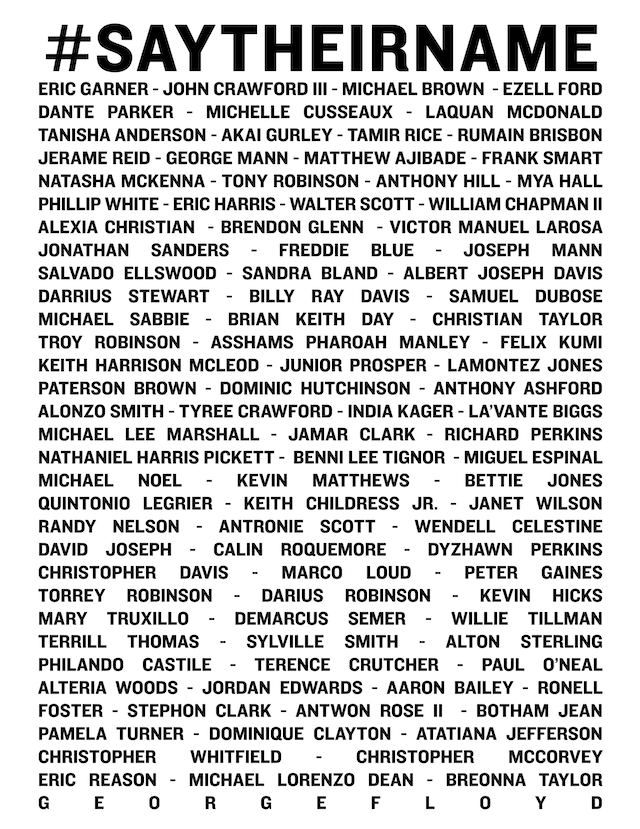 chart by LA Johnson for NPR

“You don’t want to have this discussion.”

“Yes I do. I want to understand why you aren’t joining the protest today.”

“I’ve told you. I don’t believe the system can be reformed. What you’re protesting is just a well-embedded part of a large self-perpetuating system that hasn’t worked since it began centuries ago, and is now in the final stages of collapse.”

“Civilization. Industrial Capitalism. The Modern Human Enterprise. Whatever you want to call it.”

“This is about a particularly odious part of that system. A part that kills people.”

“Lots of parts of the system kill people. Industrial agriculture and medicine. Air, water and soil pollution. The entire military complex. It’s inherently competitive, zero-sum, violent, destructive, ignorant of externalities, and has accelerated the sixth great extinction of life on the planet. Including human life. And it’s all discriminatory. Whether you live or die in this system, and how pleasant or painful that life is, depends almost entirely on the cards you’re dealt when you’re born. The system kills people, unequally.”

“You’re the one who says there is no system. You said it’s just a concept made up to try to make sense of things.”

“It’s the collective behaviour of eight billion people each desperately struggling to survive and to do the best they can for themselves and the ones they love. System is just a name for that. The collective result of all those behaviours is chaotic, unintended and uncontrolled. It’s utterly unfair. It’s racist, sexist, nationalist, ageist, and discriminates violently against the poor and unemployed, who are blamed for being lazy, and the sick, who are blamed for not taking care of themselves and for eating badly. Eight billion people looking for someone or some groups to single out to blame for our ghastly global human collective failure. It’s all collapsing, thankfully. But I’m afraid it’s going to get a lot more challenging as it does, and as the blame game accelerates. I’m kind of sorry you have to live through it. When you were born, your mother and I both believed things could be turned around. We were mistaken.”

“Mom’s coming with me. Why don’t you come? You might learn something.”

“I’m sure I would. Or will. I’ll come if you want, but if I do it’s because I’m worried about your safety, not because I think it will accomplish anything.”

“How can you be so sure? You used to be a protester. You stopped some pipelines and dams from being built. You ended a war. Maybe we can prevent some people being killed.”

“We delayed the pipelines and dams; we didn’t stop them. And the war was ending anyway; nobody wanted it to go on. You might cause enough people to pause, for a little while, and maybe save some lives. But then it will resume. New warmongers have been and will be elected and new wars launched. You can get attention and affect short-term behaviour for a while. Occupy did, for a while. The many antiwar protests have worked, for a while. #MeToo got people’s attention, for a while. Climate marches got prime ministers to declare emergencies and join in, for a while. But once the placards are laid down and the media goes away, everything resumes. You can’t change the trajectory of eight billion people. We will do what we will do, including killing people, including protesting, including destroying the planet we depend on for our lives.”

“How can you be such a defeatist, and at the same time be so equanimous most of the time? You get upset by the news — I can see it in your face, in your whole body. How can you be at peace just letting it all happen?”

“Not at peace. Resigned. I know how blessed I am, how much worse most people have it, through no fault of their own.”

“So come out and demand that something be done to allow those who are particularly oppressed to have it better, to at least live without fear of being killed.”

“Demand it of whom? You think someone is actually in control of all this, that some group can pass some laws or introduce some new regulatory group that is going to substantially change anything? The whole system is collapsing; every part of it is in crisis, and even when you can get people to stop and focus on any particular set of outrages, you’ll get about 10 seconds of their time, they’ll sympathize, most of them, and then they’ll get on with their lives and it’ll all be forgotten. We’re all doing our best to cope with a civilization in free fall collapse, even those that’re in denial of that fact.”

“So you’re saying it’s OK for racist cops to kill with impunity.”

“Nothing’s OK. Police forces can be riddled with traumatized, mentally ill people who signed up because they felt angry and helpless at the world and wanted some feeling of power. So can the military. So can the C-Suites of corporations. So can governments. Train any group that it’s us-against-them and teach them to cover for each other no matter what, and give them authority and arms, and this will be the result. Those who believe crime is rife, that everything is black and white, that life is like violent Hollywood crime movies, that everyone’s a potential bad guy, that what’s needed is more exercise of authority, shock & awe, are going to self-select into these professions. On top of that they limited training in peacemaking, and a lot of them probably don’t think that’s part of their job. And then we dump them out into the streets and expect them to deal with all the shit that stems from grinding chronic poverty, boiling-over anger, addiction, physical and mental illness, rage, fear, grief, despair and hopelessness. No one can do that job, especially not cops. That’s not an excuse for targeted violence of any kind; it’s not at all OK, but it’s a symptom of a system that’s made everyone ill, and which is falling apart, leaving everyone desperate and on edge as a result.”

“So because you conveniently think it’s hopeless, you think it’s fine to do nothing, to just let atrocities happen.”

“I’m not a humanist like your mother. We’ve been through this discussion; you’ve read John Gray so you know what I think of humanism — It’s idealistic and delusional. Humanists are just the latest flavour of salvationists, and there is no salvation, and never has been. There is no progress, not in the larger scheme of things. So by all means be an Activist — say, with your eyes wide open, that it’s hopeless but you have to do something anyway, that even if it only improves things on a tiny local scale for a very short time it’s worth it to you. I respect that. Or be a Chronicler — hold a mirror to the world to show just how awful the system is, so even if the system can’t be reformed we can at least do less to prop it up, and let it collapse a little faster. I respect that. And I will love you even if you’re a humanist or a technotopian or any other flavour of Salvationist, though I will work hard to disillusion you.”

“I’m going now. I’m not under any illusions. And I have to do this.”

“I know. Please be careful. Don’t do anything I wouldn’t do.”

“Hah! Yeah right, says the hippie anarchist radical. Mom told me what you did when you were younger.”

“Nobody calls them placards any more Dad. If they ever did. Wow. List of Black Americans killed by police in the past decade. But do you think it’s appropriate for me to carry such a sign, or any sign for that matter?”

“That depends on why you’re going. If you’re going out of a feeling of shame or righteous indignation, probably not. If you’re going in solidarity, or to bear witness to what is happening, I would think it’s probably OK. Ask your Black friends. And if they think it’s inappropriate for you to carry it, offer it to them.”

“So does that make me an Activist, a Chronicler, or a Salvationist?”

“When we marched for #metoo, and for Fridays for Future, what were you then?”

“You don’t even have a choice.”

“Coming with you. I don’t have a choice either. You have your mask?”

4 Responses to Under No Illusions