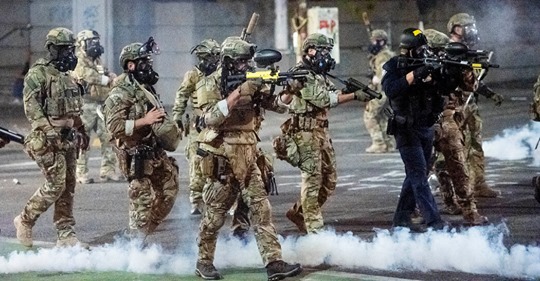 David Ehrenfeld, in Beginning Again (1994), describes our civilization as a ragged flywheel, over-built, patched and rusty, spinning faster and faster and beginning to rattle and moan as it comes apart:

There go the college students along with the VPs, provosts, deans and professors who have not prepared them for life in a changing world after formal schooling is over. There go the high school and elementary school students, along with the parents, administrators and frustrated teachers who have turned the majority of schools into costly, stagnant and violent babysitting services.

So now we have city and state governments suing the federal government for sending unmarked and untrained paramilitary secret police, unrequested, into their streets to terrorize, intimidate and kidnap innocent citizens as a sheer show of their employer’s political might. A DA in Philadelphia has asserted that if they do the same in his city, he’ll have his own police arrest them. There is a term for what happens when two domestic militias battle for control of a place inside a country. It’s called civil war.

What Trump has done, and is threatening to do in many more places that don’t and won’t vote for his disgraceful party, is nothing less than a declaration of war on citizens of his country in areas that don’t support his incompetent, massively corrupt, out-of-control administration. It’s been predicted for a decade or two — when oppression, inequality, brutality and injustice reach the kind of level they did in the US in 1860, or today, something has to give.

The title of this post comes from a Hemingway novel in which the protagonist is asked the question “How did you go bankrupt?”, and his answer is “Gradually, and then suddenly”. Last year Tim O’Reilly borrowed the phrase to describe how technological change happens. But far more importantly, just as it describes how financial and economic collapse occurs (through many, many depressions and appropriately-named “shocks”), how evolutionary dead ends occur (so-called “punctuated equilibria”), and how social and political collapse occurs, it also describes how ecological and civilizational collapse occurs.

This is endlessly baffling to the human mind (notably those trying to make sense of historical events) because it is in our nature to look for patterns, continuities, things that seemingly applied in past and so presumably should apply in future. The hockey stick pattern, where a long slow rise is followed by a sudden catastrophic fall, always catches us by surprise, even as we are being warned of looming “tipping points”. Likewise, the idea of exponential growth — the proverbial doubling of the grains on each additional checkerboard square — is largely unfathomable to us, which is why we can’t figure out how any more than 1.5ºC of average global warming will wreck our planet and render most of it uninhabitable, or how pandemics can occur. Like the money spent on the global war machine, these are simply mind-boggling numbers, and our brains just give up trying to make meaning of them, or assess what should be done about them. Let’s just go back to believing in what, we always thought, used to work well enough.

Gradually, and then suddenly, is how the slow rise of corruption, greed, waste and stench in American politics and corporatism since the 1980s (the Reagan years), and beneath that, more profoundly, since the failure of “Reconstruction” in the 1870s — and their analogues in the rest of the world — have brought us to the global socio-economic precipice we are now teetering on.

Gradually, and then suddenly, is how planetary ecocide has soared since the start of the cheap-oil-fuelled industrial era, and beneath that, more profoundly, since the invention of agriculture and the tools used to kill other species thirty millennia ago, has brought us to the global ecological extinction and runaway climate-change precipice we are now teetering on.

This is what happens when a species that is obsessed with its personal survival over the welfare of all life on the planet, achieves ascendance through a combination of astonishing innovation and sheer brute force. The death rattle is now as deafeningly loud as the LRAD sound cannons used to quell the protests of the righteously outraged.

We see this in the streets and faces of our beleaguered, oppressed, exhausted citizens. We see it in the massive and endless contraction of all forms of more-than-human life, the despoiling of the land, soil, water and air, and the desolation of habitats for all but own rapacious, insatiable, disconnected species.

We have, if we have been watching closely, seen this slow collapse building momentum, for millennia, from when we first left the trees of the tropical forests in search of a new livable world in the advent of past ghastly climate changes (which, like the current one, crept up glacially on our early forebears, and then very suddenly, in a matter of a few years, overtook them).

The current long slow collapse is becoming sudden. But not in a Mad Max way. Earl Mardle writes:

For nearly 20 years now I have been muttering that highly complex systems do not degrade elegantly; they resist like hell, then they collapse. It’s how [our bodies] die, for example. I have also been muttering that the complex system based on the US imperial fiat has been showing secular signs … that it is not happy and neither able to enforce its will nor adapt to the changed conditions…

And then Trump refusing to confirm that he would accept the result of this year’s election. Are we going to see the same unmarked federal troops arrayed around the White House, facing National Guard or Army deployments with their weapons pointing at the centre of the US Executive Government? And who will shoot first? It used to be a dystopian film script idea. It isn’t any more.

Our civilization (like all others before it) is behaving like the body of an old person slowly being overwhelmed by an accumulation of incurable illnesses, reflecting just the natural frailty of all systems as they age, as well as some serious, but too late to rectify, mostly unintentional neglect.

When I predict that our thirty-millennium-long* civilization will soon end, I mean we will see a series of sharp declines and partial recoveries over the next six or so decades, before its heart stops beating once and for all. The last 60 years of a 30,000 year ‘life’ may seem drawn out, but it is only 0.2% of the civilization’s total lifespan, the equivalent of the last 60 days of a long human life. Just as 50% of medical costs of a typical human are spent in the last 10% of their life, we look likely to extract 50% of the world’s resources, and render extinct 50% of its species, in the last 10% of our civilization’s life, just desperately trying to keep the useless old bugger alive a little longer.

And like a human life, it won’t be a precipitous health collapse, but a whole series of small shocks and injuries — just as heart attacks and chronic diseases of the organs lead inevitably closer to organ failure, despite expensive surgeries and transplants. So we can expect to see more suffering — more and deeper and longer depressions, currency failures, wars, governmental collapses, and of course horrific droughts, storms and other climate shocks that will eventually make civilization’s infrastructure too expensive to maintain; we’ll just stop trying to repair things that seem certain to break again soon.

Five to eight decades left — the blink of an eye in cosmic time, and even in our beleaguered planet’s long and varied life. But don’t mistake this for breathing room — this is the final 0.2% of our bloated, sickly civilization’s remarkable, colossally-destructive life. This is the end stage of collapse we are witnessing, the sudden part, by all accounts except our own.

The Trump ‘era’ might be viewed, if there is anyone left to observe it after civilization’s collapse (the history books may one day be viewed as unbelievable fantasy stories, if our post-collapse descendants can even be bothered to read anything so irrelevant to their staggeringly simplified lives), as the start of civilization’s final senescence, the tragic point at which the old man, after a long and violent struggle with everyone and everything he met during his unhappy life, finally lost his marbles, and started to behave completely incoherently.

There may be moments of clarity in this final period of delirium — we might finally start to recognize the horrific oppression we have meted out to billions of our fellow humans through systemic racism, sexism and other diseases of terminal patriarchy. But it is too late to rectify or heal these ghastly afflictions — the game is up, and there is no time for those who, outrageously, unfairly, missed their turn to play. Soon we will realize that, in order to keep the avaricious, heartless, insane old man alive, we have foolishly sold and mortgaged everything. Nothing remains, already, except debts, debts extracted thoughtlessly from future generations, that can now never be repaid.

The death rattle, the drumbeat. This is how it ends. And after us, finally, the dragons.

*  If you start counting with the invention of the flint arrowhead and spear that enabled the mass slaughter of the planet’s great mammals.

10 Responses to Collapse Happens Slowly… and Then Very Suddenly