CoVid-19: Are You Feeling Lucky?

I’m still tracking the data on the pandemic. My message hasn’t changed. I’ll try to keep this short, since it’s mostly preaching to the choir. The data in the charts below are based on excess deaths data, provided by health and government statistics bureaus in most countries. Infection data is based on seroprevalence reports, mostly from surveys of blood donors and community water testing samples. Hospitalization data is as provided by health authorities, but is likely understated.

Reminder: I am not a medical expert, but have worked with epidemiologists and have some expertise in research, data analysis and statistics. I am producing these articles in the belief that reasonably researched writing on this topic can’t help but be an improvement over what’s currently out there. 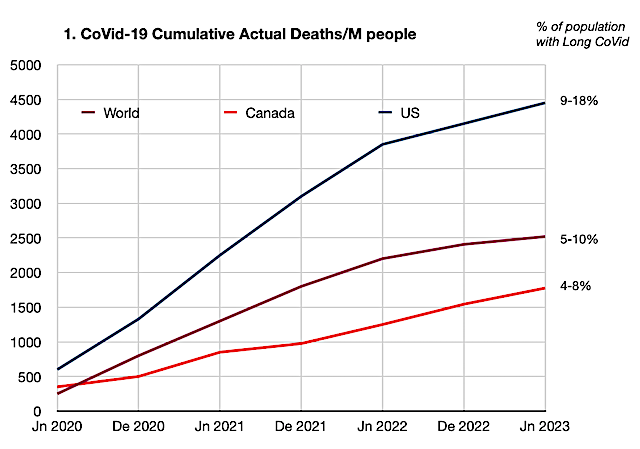 The chart above shows excess deaths, smoothed, since the start of the pandemic. It shows that the pandemic is still raging, taking almost as many lives in 2022 as in 2021, the worst year globally. In Canada, as measures were relaxed and fewer had been infected, 2022 was actually the worst year yet for deaths.

A cumulative death rate of 5000/Million people means that 1 out of every 2o0 people has been killed by this disease. Your risk of dying is at least 10x higher than that if you’re elderly or immunocompromised.

Based on the average of six published estimates, it would appear that about 6% of Canadians, 8% of the world’s population, and 14% of Americans, will have acquired Long CoVid symptoms by mid-2023, sufficient to permanently impair their health. 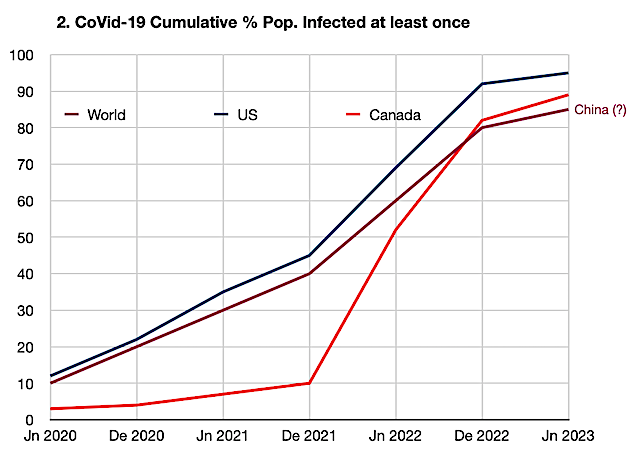 As chart 2 above shows, some countries like Canada that “flattened the curve” early through masking, high rates of vaccination and boosters, self-isolating and other measures were able to avoid high rates of infection when the prevailing variants had the highest fatality rate, but Omicron and its subvariants were so transmissible that almost all countries now have cumulative infection rates of 80-95%, and high rates of reinfection as the new subvariants “escape” being neutralized by previous infection or the older vaccines.

The newest “bivalent” boosters, along with N-95 masking, self-isolating, and (increasingly difficult to get) testing after symptoms or high-risk exposures, and the use of antivirals by older and immunocompromised people testing positive, are now the only effective ways to prevent reinfection, and the heightened risk of Long CoVid that accompanies each reinfection. And these are also the only effective ways to reduce your risk of hospitalization and death from the disease.

Your alternative is just to hope that you don’t get reinfected, that no new dangerous variants emerge, and that the existing subvariants will continue to have relatively low fatality rates.

What remains to be seen is how the BA.5.2.1.7 (also known as BF.7) subvariant that is tearing its way through China, now that that country has dramatically relaxed its mandates, will have on global total infections, hospitalizations and deaths, and on the emergence of yet more new variants as global case counts soar and provide yet more opportunities for the virus to mutate. 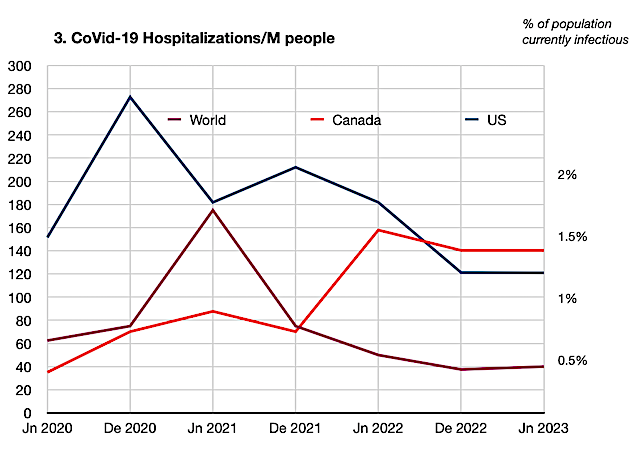 Chart 3 above shows smoothed publicly-provided hospitalization data — the number of people in hospitals with the disease, per million residents. While the Canadian data are alarming, they may partly reflect the high access provided by Canada’s universal health care system, compared to countries that have unaffordable two-tier health care systems. Still, given these trends, the Canadian governments’ relaxing of standards, monitoring capacity and testing is particularly reprehensible, as Canada’s running daily per-capita death toll from the disease has now caught up to that of the US.

In New York, thanks to the explosion in cases of the new hyper-transmissible XBB.1.5 subvariant, New York State’s January hospitalization numbers have soared above 200/M people. This suggest that for the rest of 2023, we may see a sharp uptick in hospitalizations, rather than the continuing decline most countries are banking on. And then we’ll find out how lethal XBB.1.5 is compared to previous subvariants. Fingers crossed, I guess.

Since hospitalizations are a good indicator of infectious disease prevalence, this chart also shows that, on average, 1-2% of all the people you encounter in a mall, restaurant, friend’s home, arena, bus or train are likely to be actively infectious, so your risk of reinfection, especially if you and others aren’t masked or distancing, is high. It only took six months for half of all Canadians to get their first infection (the first half of 2022), so it wouldn’t be unreasonable to assume that in most countries you have a 50% risk of reinfection in 2023. You can take steps to reduce that risk, or not.

And each reinfection increases your risk of getting Long CoVid. 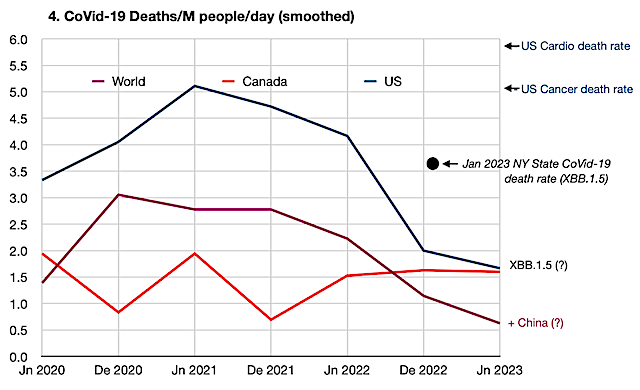 Chart 4 above shows the same excess deaths data as chart 1, but on an average-per-day basis rather than cumulative. It shows that CoVid-19 remains, and is expected to continue to remain, the 3rd largest cause of death in North America, at least for this year, behind only cardiovascular diseases and cancers.

There are two huge wild cards in the projections of deaths for 2023. The first is the explosion of XBB.1.5, which first appeared in the US in New York last month, and where the death rate has spiked to 3.6/Million people/day, more than twice what it was before, and twice the US average. If that death rate holds as XBB.1.5 spreads across the country and the world, we may see new peaks in deaths and hospitalizations rivalling the worst of the pandemic so far.

The second wild card is, of course, China, where the BF.7 subvariant is exploding as mandates are abandoned there. We have little reliable data on China’s infection and death rates, or on the extent and effectiveness of their vaccination program. We will see.

If you’re in average health, your chances of dying of CoVid-19 if you don’t take precautions are approximately the same as your chances of dying if you were make 1,000 parachute jumps from an airplane. Why would anyone take such a risk if they didn’t have to? Just because everyone else does, it would seem.

10 Responses to CoVid-19: Are You Feeling Lucky?