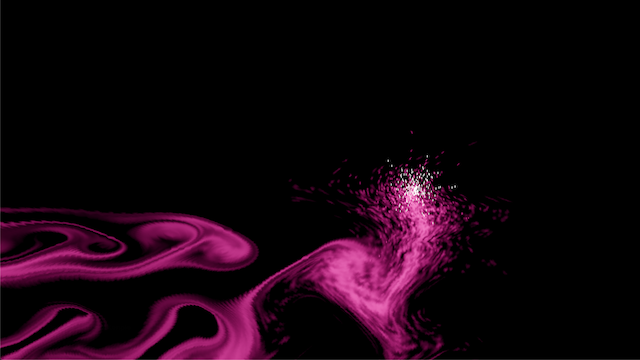 “April is the cruellest month” — The first line of TS Eliot’s The Wasteland, originally read “February is the cruelest month”, but Ezra Pound insisted it be changed, not to make it truer, but because it sounded better poetically. Image is from iTunes visualizer.

It’s been a stressful and anxious month for me, capping off a third consecutive hard winter in this usually balmy (perhaps in both senses of the word) part of the world. In some ways it’s been good for me — forcing me to face some fears that sometimes border on phobias, and beginning to move past them.

Such is the state of cognitive dissonance in which I live. On the one hand, I know, intellectually and intuitively, that everything I perceive, including my self and its sense of free will and choice and control over my actions and beliefs, is illusory, a trick of the brain, an unfortunate and useless evolutionary accident, a psychosomatic misunderstanding; research (and glimpses) have persuaded me that there is nothing separate, there is no time, and there is no individual person — there is only this, which cannot be known or experienced by any individual. Though there can be glimpses.

And on the other hand, afflicted with this illusion of self-hood and self-control, I am incessantly triggered by what seem to me incredibly stressful and anxiety-creating events, happening to me and those I love, leaving me exhausted and sometimes seemingly hanging by a thread from emotional collapse. It’s really insane.

It’s like watching a horror movie that you don’t want to watch any more, but discovering you can’t stop — you’re utterly immersed in the movie, and knowing it’s not real doesn’t help at all. Or like suffering from ghastly hallucinations that you recognize as such but can’t stop viscerally and endlessly reacting to. Or, of course, like finding yourself in a nightmare from which you cannot wake up.

It’s not usually like that, of course. Most of the time I’m my usual, grateful, blessed, joyful pessimist. Few people have less reason to be stressed or anxious than I do. Doesn’t matter a damn. Every prison-of-the-self is its own unique, inescapable and incomparable hell, much of the time, and knowing it’s a dream makes not one iota of difference. Like everyone, I am merely a reaction, with no control over what is apparently happening or how I apparently respond; on an endless roller-coaster alternatively laughing, and (uselessly gripping tightly) cringing in fear. Lost and scared. For no reason. And there’s no escaping it.

Of course, this is a very dismal and hopeless way of seeing the world. I think my interest in this radically non-dual suggestion of what is really real would never have seriously arisen or lasted (three years now) were it not for the glimpses. So what are these glimpses? Here’s what I wrote about the last apparent glimpse, three years ago:

My sense is that such glimpses are not rare among humankind. I suspect they happen all the time, but when the self returns, it just rationalizes that it was a nice blissful state that lasted for a while. The self takes ownership of what happened, and assumes it was a pleasant, temporary, possibly ‘out-of-body’ experience that happened to it. It cannot and will not recognize its own absence, its own unreality; its self-selected job, after all, is to be in control taking responsibility for and making sense of everything that seemingly happens to it.

This is a staggering tragedy. Not that the self is unable to see the truth of its own illusory and dysfunctional nature, but rather that the self, which afflicts us with such needless suffering and misery, such endless anger, rage, sadness, anxiety, fear, shame and depression for no reason whatsoever, evolved in the first place, probably just as an accidental consequence of the evolution of large brains and their capacity to conceptualize a separate ‘self’, which then came to accept and believe that self was real, and in control.

It’s a ghastly, awful cosmic joke that no self can ever get. There is no awakening, no enlightenment for the self, for the individual. Only the endless prison of its own invention. Awakening or enlightenment, or whatever one chooses to call it, only (apparently) happens when the self, mercifully, drops away, leaving only this. And the realization, by no one, that this is everything, this is all there is, a perfect and meaningless and astonishing appearance out of nothing, that needs nothing to be done.

My guess is that we’re getting close to a scientific and philosophical consensus that this is so. But just as there is a growing consensus that there is no such thing as free will, for the billions of human selves on the planet, this consensus will be mostly ignored, ridiculed, even condemned as cruel and escapist and dismissive of the misery of the human condition. The fact that this philosophical, existential schism will probably emerge just as the latest and largest (apparent) human civilization accelerates into chaos and collapse, is going to make the next few decades a fascinating and dreadful unfolding to witness.

In the meantime, if my description of a glimpse doesn’t resonate, I can fully understand that my recent writing must come across as non-sensical, preposterous, and probably annoying. Although there’s nothing any of us can do about it, I wish us all freedom from our selves, and the realization that, always and everywhere, all there is is just awesome, perfect, this, simply, obviously, beyond knowing, and beyond doubt.