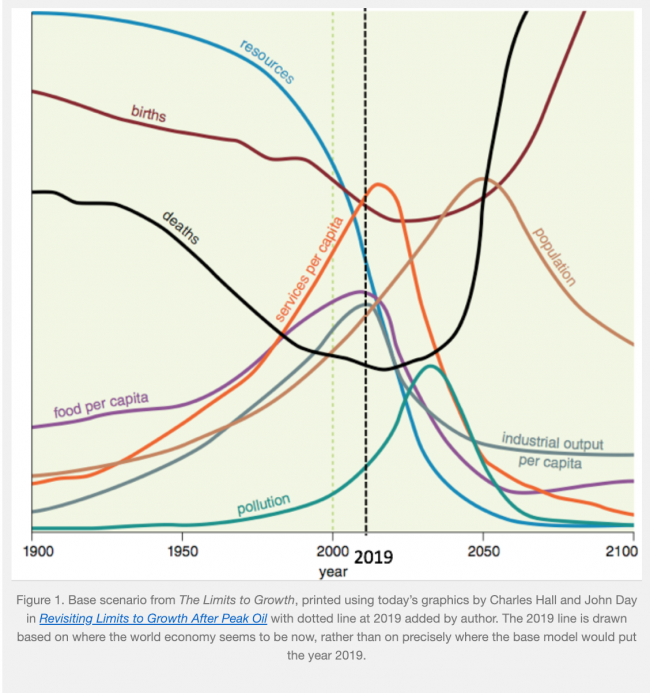 For the last few years I’ve been posting links to the best (in my opinion) articles, videos and quotes published in the past quarter, on a variety of subjects. Since my December list there has been a rash of very interesting articles about economic, ecological and societal collapse, so rather than waiting until March I thought I’d do a special monthly post on them. Here we go:

Reaching the Limits to Growth: Gail Tverberg exhaustively reviews the latest data in light of the updated Limits to Growth report, says we are now on the cusp of those many interconnected limits, and predicts a huge and enduring global economic depression is coming, bringing with it the possible end of human civilization.

The Collapse of China: Ilargi at the Automatic Earth weighs in on the economic crises (energy, demographics, trade deficit, debt) now facing China, now the world’s largest and fastest-growing economy, and one of the most politically repressive places on earth. Now, as “Chinese stock market conditions resemble those during the 1929 Wall Street Crash”, the economic, political and social fabric of the country is extremely vulnerable. Students of China’s long, violent and unstable boom-and-bust history must be alarmed. And so are economists who know the entire global economy is increasingly dependent on China’s.

The Bankruptcy of the US: Dmitry Orlov goes through the numbers to explain why the bankruptcy of the US government is an inevitability. He also compellingly updates ‘progress’ towards the five stages of collapse for 2019, from his 2013 book of the same name.

Burned Out on Collapse: Carolyn Baker links us to Umair Haque’s new article about the traumatizing effect of the endless litany of bad news about our world and its future:

To be traumatized is to be exposed to death, of violence, to feel threatened with one’s own nonexistence, or that of a loved one. And a good psychologist would know that none of that has to be “direct.” You don’t have to be the one who is hit by an abuser to be traumatized by abuse. You merely have to be in proximity to such a thing, for the experience to ripple out and strike you, too.

But isn’t that precisely what this age feels like? Proximity to, if not direct experience of, relentless, gruesome, needless, abuse after abuse? Abuse of power. Abuse of societies. Abuse of democracy. Of technology. Abuse of the planet. Violence against the vulnerable. An indifference to life and truth and decency. Capitalism, greed, devastation. Fire, famine, flood. Skyrocketing poverty amongst soaring riches. Wouldn’t watching all of that make any sane person burn with rage, pound with anxiety, shudder with dread, go cold with panic? It does me, and I think that the only person you’re kidding is yourself if you pretend it doesn’t do just that to you, on some level, too. This, my friends, is a traumatized time, generation, milieu, society, world.

The Dark Places of the Future: John Michael Greer predicts what will happen in 2019, which he thinks will be a rather uneventful year in the slow decline of our civilization:

Despite the claims still retailed by the increasingly ragged chorus of believers in perpetual progress, industrial civilization is no longer progressing. Rather, it’s slipping bit by bit down the trajectory I’ve titled the Long Descent—the process, averaging one to three centuries in length, by which every previous human civilization has ended in a dark age. That’s not something that can be stopped or reversed; it unfolds from conflicts hardwired into the basic ecological and economic structures of civilization; several familiar milestones are already past, others are coming into sight on the road ahead, and one implication of that reality is that the rest of your life, dear reader, will be spent in a civilization in decline.

We Are All Syrians Now: Albert Bates draws parallels between the improbable and catastrophic decline of Syria into chaos and war, and the decline we will all be facing in the decades and centuries to come:

[Based on our current trajectory] the climate will continue to warm for several more centuries until it reaches its new equilibrium temperature based upon the changed chemistry. That could be at 7 degrees, 9 degrees, 12 degrees, we really don’t know. We just know it is a lot hotter than mammals like homo can tolerate.

The Madness of Geoengineering: At a recent global conference on geoengineering, it became clear that it is no longer a matter of if, but when, we will start mucking with the stratosphere to try to mitigate the damage we have done to the atmosphere and the planet. Get used to hearing about Solar Radiation Management (SRM). Of course, we have no idea what we’re doing, the potential consequences of the inevitable errors are so unimaginably horrific that some experts want geoengineering completely banned, and in any case it only addresses a small part of the climate change problem. And once we start, there’s no turning back.

4 Responses to Links of the Month: January 2019 — Collapse Watch Edition