Where We Are Now: More on the Culture of Fear 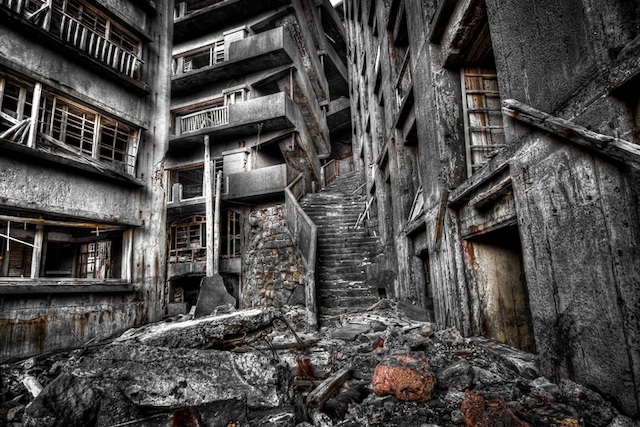 Image of ghost town in Japan, near Nagasaki, abandoned when the coal ran out, from pxhere, CC0

Three years ago I wrote an article entitled A Culture Driven By Fear: The Psychology of Collapse that argued that while healthy cultures strive to meet their members’ essential needs and wants, and are driven and made cohesive by love, dysfunctional cultures, like our current global industrial civilization culture, are indifferent to their members’ needs and are driven by fear. This essay elaborates on that thesis.

Culture is the collective beliefs, aspirations and behaviours of a group of people (or other creatures). It is what keeps them together. Study tribal cultures, wild animal cultures, and even a few modern subcultures, and you will see little sign of coercion — they believe and want the same things, and joyfully do what is understood to be in the group’s collective interest.

Humans are of necessity a social species: We are physically quite weak and vulnerable (compared to most other creatures), and lacking much inherent self-sufficiency and autonomy (we spend a long period in the womb and another long post-natal learning period). Loners do not fare well inside or outside human cultures. We rely on each other to survive and to thrive, so it is not surprising that evolutionarily successful cultures are built on love and willing collaboration.

That collaboration is directed to meeting the collective needs of the group, which, in addition to the obvious physical needs for food, water, sleep and protection from uncomfortable weather (shelter, warmth etc) include essential emotional and psychological needs, some of which I enumerated in another recent article, drawing on the work of  Johann Hari, Gabor Maté and David Foster Wallace:

While most healthy tribes’ and communities’ collective effort is oriented to meeting these physical and emotional needs, such cultures are also driven, at least secondarily, by certain healthy fears. I have written elsewhere that I think there are three primary fears in every human culture:

These fears are evolutionarily healthy because they drive behaviour which is cautious, sensitive, self-responsible, and responsible to the other members of the community.

I have written before about famous experiments with rats that show what happens to the behaviours and social cohesion of a group when they are facing extreme stress (namely, numbers vastly greater than the resources needed to feed and support them). It seems to me our modern culture is strikingly similar to the behaviour of rats placed in deliberately overcrowded and resource-starved situations. The ‘alpha’ rats in such situations hoard, attack, steal from and kill the others, while the subordinates cower, commit suicide, and eat their own young.

How can we account for such seemingly suboptimal behaviour, which abandons the principles of love, collective sharing and nurturing basic needs, and seems instead driven almost exclusively by the stress and fear that overpopulation and extreme scarcity can easily provoke? It presumably must have served some kind of evolutionary purpose. Perhaps it produces a quick and desperate self-limiting of numbers so that the surviving relatively healthy minority can begin again, once the balance between population and resources (both for the species and the ecosystem of which it is a part) has been restored.

If we were to witness such a tragic and violent social collapse in a laboratory, would we wish for it to play itself out quickly (to bring the violence and suffering to an end), or would we try to prolong it by throwing in a bit more cheese?

I know humanists think such comparisons are preposterous, that humans with our higher ‘consciousness’ and intelligence are not like rats and can develop more successful and less painful survival strategies. Unfortunately, a study of cultural history provides absolutely no evidence they are right.

I think what we are seeing now is a culture driven almost entirely by fear. In our modern anonymous cities we have lost the capacity to care for most others. Parents don’t have the time to show and teach children how to meet their basic needs, especially during the crucial first few years of life. More and more of us are unable to function effectively in the workplace or the society at large.

Our modern pressure-cooker lab-rat human culture offers us none of our eight essential emotional needs. It’s been my experience that our reaction when those needs aren’t met is usually a combination of anger (feelings of frustration, blame, indignation, helpless rage etc), shame (feelings of humiliation, disgrace, social ostracism, failure etc), and grief (feelings of irrevocable loss and sadness), which are in many ways interrelated and self-reinforcing, and that what underlies all of these emotional reactions is fear, of one or more of the three types described above.

What I think we are seeing, and have been seeing at least since the beginning of industrial civilization, is a pattern where almost everything we seem to do is ultimately being driven by fear. That notably includes acts of war, terror, abuse and psychosis, greed and selfishness, violence, incarceration, disengagement, scapegoating, self-immolation (real and figurative), willing self-delusion, and, of course, denial. It is what drives us to vote, usually against rather than for anything. It is what drives angry, desperate, bewildered people to turn to racist, xenophobic, violent, dangerous ‘leaders’ who stoke and prey upon fear. It is what drives so many into depression, addiction and social dysfunction. The stress it provokes (aggravated by our poor modern western diet) underlies most of the disabling chronic diseases that are impairing our individual and collective ability to function. Stress and fear reinforce each other in an endless cycle of suffering, anxiety, illness and dysfunctional behaviour.

The media, of course, being the handmaidens of the industrialists pushing us into a more and more helpless and critical-thinking deficient “consumer” society, is playing on our fears, amping them up even higher, in order to push us to buy more to address our suffering (miracle cures, escapist entertainments), our lack of control (guns, authoritarian governments), and our sense of inadequacy (status symbols and self-help books). Brilliantly, all of these consumer products actually make us more fearful, desperate for even more and stronger fixes.

This is the very definition of a culture in collapse: Failure to meet its citizens’ basic needs, exploding violence, obscene inequality, a total lack of moral integrity (especially in our business, political and legal systems), and an increasingly dysfunctional populace unable to cope physically or emotionally with what is going on.

It’s interesting that, for a few centuries at the beginning of our current civilization culture at least, we did find some stopgap means of dealing with this cultural anomie, hysteria and acedia. Religious, moral and spiritual groups (and perhaps tribal rites) taught and enforced rigid standards of behaviour that, while usually authoritarian and often arbitrary, offered something to hold on to, something to provide a constant moral compass to a populace so bewildered at the pace of change and the loss of its sense of purpose that they were willing to grab on to it. This worked particularly well when there were frontiers available to offer escape from the troubling malaise of overpopulated cities. Even now, orthodox religious groups all over the world are urging a return to rigid authoritarianism and obedience to their fundamentalist leaders as the ‘cure’ for our cultural collapse. And techno-utopians would have us escape to imagined unpolluted, resource-rich, underpopulated new planets — new ‘frontiers’ — an insane, elitist dream.

In addition, one compelling modern theory holds that, in social creatures (those, like humans, whose evolutionary fitness depends on group cooperation), the chronic stress response can be mediated by “safety cues”, starting with the mother’s soothing voice and touch, and including laughter, high-pitched songs and expressions of joy (as opposed to threatening low-pitched growls), sympathetic attention, reassuring facial expressions, tones of voice and postures, and (in bonobos at least) brief pleasurable sexual stimulation.

So why are moral authoritarianism and safety cues no longer working to temper the dysfunctional behaviour of our collapsing culture? Perhaps because a naive and toxic mix of globalization (“when we’re all the same, we’ll get along”), individual entrepreneurship (“you can do anything if you work hard”) and consumerism (“you are what you own”) is now the world’s de facto dominant religion. With its absurd cult of individuality, it preaches that our fate (health or illness, financial success or poverty, education or ignorance, fame, ignominy or incarceration) is in our own hands, when it obviously (to those not taken in by this religion) is not. You can witness its faithful adherents everywhere, even in the ghettos of Lagos and on the farms of India. You can see its failure on the shattered faces of the billions struggling and failing everywhere, in spite of everything, and blaming themselves.

And in such a desperately busy and frenetic culture, who has time to learn, to offer, or to listen to, safety cues?

And finally, the global industrial culture of the 21st century, its last, can no longer offer hope. People will endure enormous hardship with equanimity if they can believe their children and grandchildren will be spared what they suffered. Such hope is gone, now, everywhere.

This is not easy for any of us to accept, or even to fathom. We are all doing our best, and have always done so. How could it turn out so wrong? How can there be nothing we can do, no one to blame, no solace even in what future generations will be spared?

There is of course no answer to this. Our planet will survive our civilization’s collapse. It’s possible that a relatively small number of humans will be left in a few millennia once the dust has settled, and that they will live sustainable, joyful lives in harmony with the rest of life on earth as it has evolved by then, with their needs fully met, and fear an occasional and distant memory. We have no control over any of it. For us, knowing what is happening will have to be enough.

Perhaps, at least knowing, we will be a little less fearful, a little less stressed, a little more accepting, and a little better prepared for what we will face in the decades ahead.