What is Exponential Decay?

A mathematical thought experiment. Warning — this is a rather gloomy post. 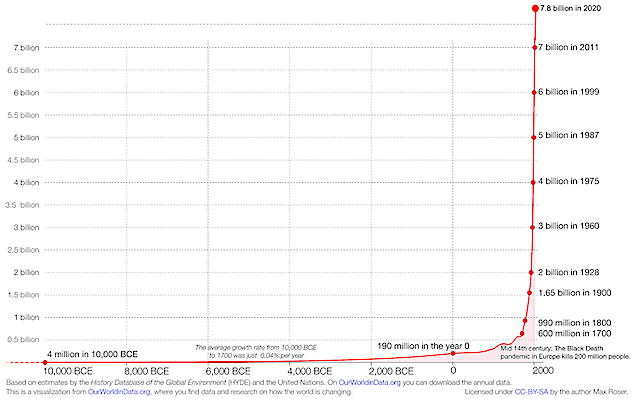 Humans’ incapacity to understand the principle of exponential growth has caused us all kinds of grief of late (notably in our handling of the pandemic), and promises to cause us a great deal more soon (the end of cheap energy, climate and ecological collapse, interest rate shocks, and ‘peak everything’).

We tend to use the metaphor of a hockey stick, but it’s a poor one — that’s a model of sharp linear growth, not exponential growth at all. A better metaphor is the ‘rice on the chessboard’ reward story. The story goes that the inventor of chess, when asked by her ruler what she would like as a reward for coming up with the amusing game, asked for one grain of rice on the first square of the board, two on the second, four on the third, and doubling the amount on each square until all 64 squares were filled. The total amount of rice in this exponential reward turns out to be 1.5 trillion metric tonnes, more than all the grain ever produced on earth.

The human population chart above is one illustration of exponential growth. If you want an even more extreme one, a chart of global resource consumption would track the same curve until roughly 1800, and then would soar six times faster — imagine the chart stretched six times taller with the same line reaching to the upper right corner.

Population agencies at one point believed the human population would level off at eight billion. Then they changed it to nine billion. Now they’re saying eleven billion, at which point it will, supposedly by sheer collective human will, suddenly flatten out, about half a chart higher and one small dot to the right, and then stay there.

That is of course preposterous. Human population is no longer able to increase exponentially, but is still increasing linearly by 80 million per year — another billion every 12 years. The limit is not human will, but the capacity of the planet to — ever more wastefully — produce ever more human food and other resources. As long as we are producing more human food each year (at increasingly catastrophic costs) we will continue to produce more babies to consume it. Human population, and resource consumption (which is still increasing exponentially), will then suddenly stop increasing, as it did in the 14th century, but because of the current growth slope, it will happen much more abruptly. Since we’ve used more than half the world’s resources already and are using the rest up at an ever-accelerating rate, that point will certainly come before 2100, even if inevitable economic, climate and ecological collapse were not additional factors drawing this insanity to an imminent close.

And then what? Since there’s no safety valve this time, no frontier to escape to, what will immediately follow exponential growth of population and consumption will be something you hear much less about — exponential decay.

We’re starting to see how exponential decay works in the case and death counts for CoVid-19 in many countries. We saw a bit of it last summer, and politicians were delighted and prematurely declared the pandemic beaten. This time, despite the fact so many people have been propagandized to fear the vaccines, and despite the slowness and incompetence of the vaccine roll-out, we are seeing sharp drops in case rates in many countries that “mirror” the sharp increases we saw earlier, and this is happening long before herd immunity levels are reached.

For the past 50 years, total global resource consumption (using the surrogate of global energy use) has been rising at an annual rate of about 6% per year. That doesn’t seem like that much until you consider that human population, depicted in the remarkable chart above, is only growing at just over 1% per year. A 6% annual (exponential) growth rate means a doubling every twelve years. In other words, we will use as much of earth’s resources in the next twelve years as we used in all of our previous history. And we’ve already used up half of all the known resources of the planet. Though we may dredge up some more, at ever-increasing incremental cost, it is not unreasonable to believe we will hit the wall about then — 2033. At that point human population will be about nine billion. Even without climate and ecological collapse, the shit will then hit the fan.

My guess is that we will stall off the peak for a few more years after that, at least for those in affluent nations. So let’s be generous and assume we can grind out the global human civilization experiment until 2040, with 9.5 billion humans.

But we’re still not realizing the impact of resource constraints, and just how steep the slope of exponential decay can be. Our population is constrained by resources available for consumption, which has been increasing six times faster than human numbers, and which will decrease six times faster after the peak. When we run out of affordable resources, we will face full-on global economic collapse, and our numbers will have to decrease to keep pace with the smaller amount of food, heat, and everything else we depend on in our vulnerable, prosthetic, human-made environments.

Some of this decline will occur ‘naturally’, as, in a world of severe scarcity and precarity, people will simply stop having children. I’d like to say most of the decline will happen that way, but the numbers don’t lie: The first few decades after peak consumption are likely to be pretty terrible, even if we divert all economic activity to simple food production and stop procreating.

And there is no reason why that rate of decrease won’t continue into the 22nd century, but I think it would be foolish to speculate on what might be sustainable human numbers, without cheap energy or any energy-fuelled technology, and with a suddenly sparsely-populated (by humans) world with 97% of peak-civilization’s abandoned and scavengeable stuff (and nuclear and chemical wastes!) left behind. And we may have so desolated the planet — its biodiversity, its climate, its soils and waters — that even 300 million may be far beyond its carrying capacity for our kind.

My grandparents’ message to me, when they described the Great Depression, was how utterly unthinkable the reality of it was in the roaring 20s — how ghastly the suffering, how far people fell from their positions of privilege and seeming invulnerability, and, most of all, how quickly it overtook everyone. Exponential decline following exponential growth.

So here we are again in the roaring 20s — driverless cars, Mars missions, dreams of living forever, the “internet of things”. Enjoy it while we can. There is no soft landing on the other side of exponential growth; it’s a hard ride down. All civilizations, like all pandemics, end, usually with surprising speed in their last gasp as the limits to growth are reached and breached, and so will this one.

7 Responses to What is Exponential Decay?