The Only Way There 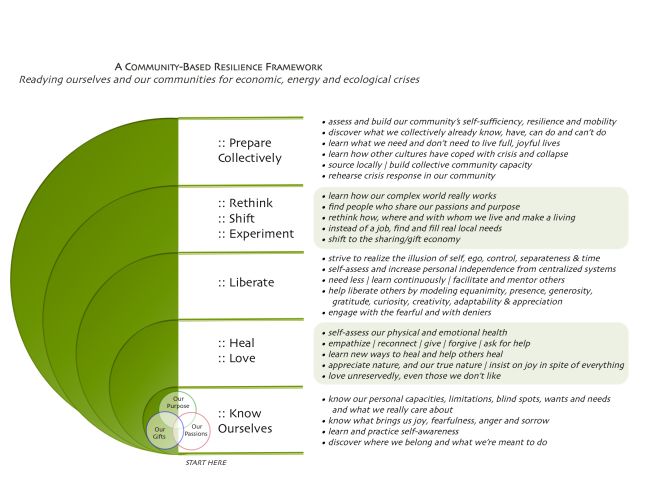 “So I had this idea to prepare a Personal Resilience Plan for 2015″, Rafe said, playing with Jag the cat. “You know, using Dave’s model. What could I do this year that would be self-awareness building, healing, liberating, resilience-modelling, loving, community-building, and community-serving. Seems more grounded, more sensible than New Year’s resolutions.”

“A grounded Rafe”, replied Daria, looking over her shoulder from where she stood making vegan pizza. “Not sure I could get used to that. I fell in love with the groundless, idealistic, disconnected Rafe, after all.” Rafe laughed. Jag, sniffing the vegan cheese for the pizza, jumped up onto the counter to supervise.

“While I ponder this improbable transformation”, Daria went on, “chop the veggies. They’re in the fridge.”

“Just look”, said Rafe, taking giant silly-walk steps towards the fridge. “Every step, no matter how high, returns to the earth. Totally grounded!”

“We’re on the third floor of a condo”, Daria replied. “If you want to be grounded you’ll have to go down to the beach, and feel the sand, instead of trying to commune with the imported wood inlay.”

Rafe scowled, thoughtfully. “Sand and pizza do not go well together. Perhaps I could settle for rounded instead of grounded. Or wild, like Jag, the cat no one here seems to own, but who seems extremely comfortable everywhere he goes, and totally free, mooching from room to room, sleeping wherever the last nice meal came from.” He went out on the balcony to see if it was warm enough to eat on the beach.

“She!” Daria shouted after him. “Jag, or whatever her real name is, is a she. That’s why she’s so grounded.”

“Jag needs no name”, Rafe replied, “She is simply who she is. Like me.” He smiled goofily at Daria, who raised her eyebrows and smiled back at him.

“You are not simply anything”, she said. “You are the antithesis of simple, of grounded, of resilient. But I still love you.” As she put the pizza in the oven she added: “If you were to follow Dave’s model, your increasing self-awareness would quickly make you realize that all that other stuff, that self-healing, community-building stuff, is not what you are ever meant to do, not who you are. You’re not empathetic, not self-sufficient in the least, and you are more hermit than communitarian. Just accept who you are, and you’ll be further along in adopting Dave’s model than most people. You have a lot of endearing qualities that are not the stuff of resilience.”

Rafe came up behind her at the stove and put his arms around her waist. “You’re such a sweet-talker. You want me to show you one of my most endearing qualities?”, he said, kissing her on the back of her shoulder.

“That is one of your more endearing qualities, I admit”, she replied, giggling. “And it certainly is resilient.” After a pause she went on: “What I meant was your special qualities that everyone admires in you. Your generosity. Your imagination. Your intellect and critical thinking. Your writing skills. These are important in any resilient community as well. You should settle for those and work with them, and let other people do the other resilience stuff.”

They were quiet for a few minutes. Rafe fed Jag some leftover vegan cheese, which she seemed to like as much as the dairy version. “Vegan cat”, he said, pointing to her. He made a salad while she poured wine spritzers, and with lunch loaded onto a tray they headed down to the beach, settling on backjack chairs, with the tray, and Jag, between them.

Rafe looked pensive. “I want to be wild, and fearless. I know that I’m a coward and impossible at handling stress, and addicted to the comforts of this unsustainable civilization, but in my heart that’s what I want. Who I seem to be is just an act, a persona I put on to be safe and get along with others. I am really wild. I’ve just forgotten how to be real, to be really here-and-now. How to just be who I really am.”

“You are who you are now”, Daria replied. “Don’t be nostalgic for what might have been, for who you think you used to be.” She thought of adding “For who you probably never were”, but thought better of it. She took his hand across the tray. She thought she saw tears in his eyes, but it was always hard to tell with him.

They looked out at the surf and the shorebirds and the surfers and the small boats far out on the horizon.

He looked across at her slyly, and she raised her eyebrows in a “what now?” expression.

He put his hand on his heart and, in a loud and warbly bass, sea-shanty style, sang:

If I were a wild and a fear-less man!…

He frowned, searching for the next line, and then sang:

I’d love you much better, as fully as I can!
Love you recklessly, love you em-pa-the-tic-ly!
Two becoming one, one with all, for all to see!

He grinned sillily and she laughed and went to say “That was terrible”, but he shushed her and said “I’m not done yet”, and then sang:

If I were to learn to be wild and free!…
I’d dance you off your feet, and sail you out to sea!
Connected to the Earth, knowing just what we should do!
Swimming with the dolphins, living raw and true!

He looked for a response and she said, with a smile “Are you done yet?” To which he replied:

If we were brave and wild, we could simply walk away!
Eat, sleep, play, laugh and love all night and day!
Tied to no one place, living free and joyfully!
Let go of illusions, and then just simply be!

He was on a roll, now, and concocted a chorus for his improv song:

Letting go of grief and fear, letting go of pride!
Letting go of guilt and shame, no more need to hide!
Seeking not to save the world or trying to control!
We’ll see just who we are, ’cause we’re all part of the whole!

“Needs some work, but you get the gist”, he said, reaching for another slice of pizza. He pulled his cap down to shield his eyes from the sun, and feigned going to sleep.

“That was… something“, she said. And then, after a few minutes, she sang back to him, quietly:

You will do what you must do,
to seek the self you think is true,
the one inside that’s really you.
But we can’t start our lives anew.

To get to where you want to go
you have to start with what you know
and who you are, and start from Here.
The path to There is never clear.

The answer isn’t found inside;
There’s no safe place where you can hide.
Just try some things and you might see
that loving others is the key.

To ‘wild and free’ from ‘cowed by fear’
it’s harder than it might appear.
I love you as you are today
and I will love you, come what may.

Rafe cocked his hat up, smiled at her, and did the theatrical hand-flourish bowing thing to acknowledge her artistic accomplishment.

“The answer’s close, but never near”, he said.

“And the only way to get there is to start from here”, she replied.

“Sadly, true.” He sighed. “Shall we retire to the drawing room?” He rose and offered his hand to pull her to her feet and hoisted the tray up onto his other hand, waiter-style. They walked back to the condo, Jag in tow. 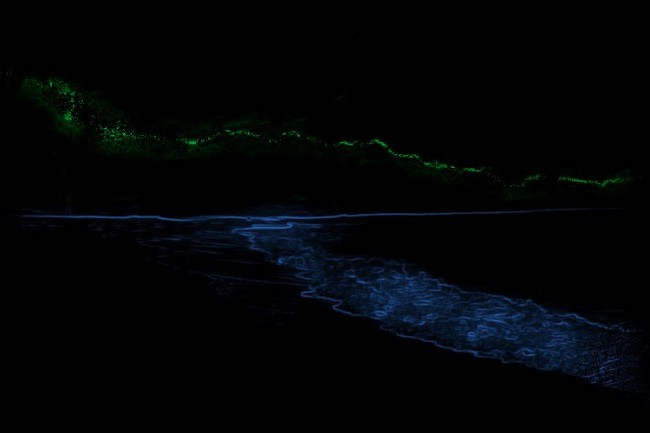 Later that evening, they tramped naked back down to the beach, bringing six candles with wind-protector sleeves decorated with stars. Jag was already there, chasing sand-crabs.

“I don’t deserve you, you know.” Rafe laid the candles out in a large hexagon and lit them with a BBQ starter.

“Yeah, but neither of us deserves a lot of the shit we’ve had to put up with, or what we have to do to just remain sane. Somehow or other it usually seems to balance out”. Daria placed two yoga mats in the middle of the array of candles.

Rafe sat on one of the mats facing Daria. “You’re right about love. I, we, have to learn to love others better, more fearlessly, unconditionally, unreservedly. Love each other. Our friends. Family…” Daria made a gagging motion at the mention of loving family. Rafe laughed, and went on: “Even those we don’t like, those we disagree utterly with about everything important. No judgement, no blame. We’re all doing our best. Even Dick Cheney.” They both made a gagging motion. “Why are humility and grace so hard to learn? What’s wrong with us, we humans? We live in the midst of a perfect more-than-human world, yet we choose to create and live inside this human fiction, this unreal culture that believes all these preposterous things and makes us all violent and ill and miserable and destructive. How can seven and a half billion people get up each morning and not think it’s insane, not just walk away from it all?”

“We think too much”, Daria replied, putting some meditation music on. “Om namo bhagavate. Inside us is the unity of all things. But we are compelled to think ourselves apart, think ourselves separate, think ourselves more, think ourselves other, think ourselves in control. We can’t help it. The ego, the self, time, abstraction, apart-ness, anxiety, suffering, fearful imaginings. It’s a serious flaw in the human software. Feedback loop. Eventually the whole neural system is pattern-rewired to conform to these fictions, to believe they’re true, they’re us. And then we infect our children and each other, reinforcing the fictions until there is no longer room for doubt. Were diseased, dis-eased, by an unanticipated consequence of the addition of more proteins and amino acids to our diets — all those extra brain cells, looking for something to do and, as we faced increasing environmental stresses as our population exploded and forced us into new and strange habitats, creating this vast representation of harsh reality and then persuading us to live inside that simple representation instead of in the complex real world.”

“So there’s no hope for us, then?” Rafe said, staring at the stars above and the stars on the candle sleeves.

Jag curled up at the end of Daria’s yoga mat. In the distance, the Pacific surf pounded in, then slowed to a gentle lapping on the beach.

(images by the author)