The Right to Die

Stand back. This is a rant. 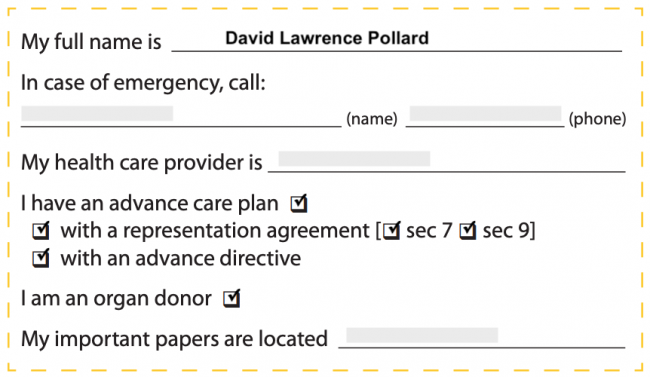 This is what happens when you have gutless, not-very-intelligent governments that are constantly being played by self-righteous religious groups, terrifying politicians that any right-to-die legislation (which now has to use the euphemism MAID — medical assistance in death — to avoid triggering the sensitive) will inevitably result in confused people dying after they’d changed their minds about wanting to, or the “legalized murder” of old people by greedy heirs or “lazy” caregivers.

If we applied such standards anywhere else, we would not be allowed to drive cars, since there is a risk that they might be deliberately or carelessly used by a few people to cause injury or death. It’s madness. Of course right-to-die laws could be abused by a small number, but the solution to that is to pass the laws and then charge the abusers (you know, like we do with drunk driving laws), not to sit on your hands and through inaction punish the innocent. Religious zealots, in cahoots with a clueless medical profession and a terrified legal profession, are holding the rest of the world hostage to their ideology. Their message is: We don’t want you to be able to end your life, no matter what. Suffer.

Senator Pamela Wallen tried to fix it. She rejected the Canadian government’s utterly inadequate rewrite of Canada’s right-to-die laws, not only because it’s cruel and inhumane and will lead to untold unnecessary human suffering, but because it’s patently unconstitutional — as the courts have already ruled, in rejecting the current law, which is equally lacking in compassion and backbone, and which the ‘rewritten’ law essentially restates with a few weasel words. She proposed several amendments to strengthen the right to die, which were passed, by a nearly 2:1 margin, by the Senate in a free vote.

Our dim-wit Prime Minister rejected Pamela’s amendments outright, even stalling off a step in the right direction for some sufferers of terminal psychological illnesses for two years (to let the next government deal with it before it becomes law). The man is totally without courage or character.

And his fucking lackey Justice Minister said simply he “does not believe we are entirely ready” to safely provide assisted dying for people with mental illnesses. Really. He plans to install “panels” (ie selected “experts” who will deep-six Pamela’s amendments) over the next two years to ensure they never see the light of day. The CMHA, in the pocket of right-to-life groups, said more bluntly “Until the health-care system adequately responds to the mental health needs of Canadians, assisted dying should not be an option — not now and not two years from now”. Guess who’s going to be on the “panels”?

Please think about that before you give money to “health” organizations like the CMHA that have an anti-choice agenda.

Like Pamela, I have a substantial history of Alzheimer’s in my family. I’m about to turn 70. My father and uncle, in their very early 80s, went through years of hell. Hallucinations. Paranoia about medical and support staff regularly killing and torturing other “inmates” overnight. So much terror about his invalid wife that he almost killed himself trying to “escape” to rescue her, since he couldn’t understand why, despite his warnings, his children weren’t doing so. Reduced to long meanderings about his bowel movements and asking desperately for help with severe constipation, brought about by the many meds he was “treated” with to keep him calm and doped up. Being expelled from care homes that deemed him “too violent and unpredictable” to be kept anywhere without constraint.

Thanks to Canada’s new and still medieval laws, that’s probably me in 10-15 years. I already show some early signs of cognitive problems. And nothing I can do — no advance directive, no declaration of sympathetic decision-makers who I trust to carry out my wishes, no passionate blog article — can prevent it. The doctors and lawyers can just shrug and say “Our hands are tied.” Which will be ironic given that by then I will probably be sedated and my hands strapped to a gurney.

I’m not asking a lot. I just want to be able to write, now, when I’m clear and level-headed, a statement that says the following, and have it respected when I’m not:

If, a decade or two from now, the people I’ve designated to make decisions for me when I’m incompetent, have to act in that capacity, they have a ghastly choice: They can honour what they know I want, and risk possible criminal charges and imprisonment. Or they can buckle under to the right-to-lifers and obey the law, knowing it is the opposite of what I want, and that they’re condemning me to a prison from which there is no escape, other than the one my father was sane and courageous enough to take. No one should be put in that position.

We’ve been saying this for decades, since the current PM’s father made his statement and we tried to prevail upon him to add the right to die to his bill ending the criminalization of homosexuality and abortion in Canada. He had to fight foaming-at-the-mouth Conservatives just to accomplish what he did. It would be a wonderful legacy to his name if his son would muster up some courage and blaze the trail for the right to die with dignity. It’s not a big ask.

I should note that Canada is far from unique in its right-to-die laws. In much of the US and the rest of the world, the laws are even more restrictive, and in some places getting worse. Millions, perhaps billions, will face these same choices, dread, and terror. All because one ancient religious ideology continues to prevail over common sense.

I’ve read a lot of heart- and gut-wrenching stories, some of them dating back decades, from people caught in this ghastly human-caused quandary, and the suffering, guilt, and criminal consequences that it produces.

There’s a chance that, in ten or twenty years, someone may stumble on this post, and do a little research, and realize that my death, and the situation for those I trusted to bring my life to a dignified and peaceful end, was every bit as horrific as my father’s, and as horrific as the agonizing slow deaths of so many millions of others. If that situation should change, I will rewrite this post. I don’t expect I will have to.

Please, when you next vote, make this issue one you make your decision on, and get a clear, recorded affirmation from your candidates that everyone has the right to die in peace and with dignity. Otherwise, it will just go on, and on.

11 Responses to The Right to Die