The Lab Leak Hypothesis: Iraq WMD All Over Again? 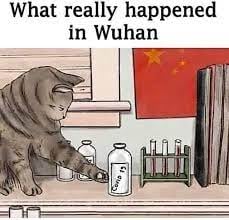 At least twice already, the US intelligence cartel has used deliberate disinformation to goad the gullible American media and public into an unjustifiable war. The first Gulf War was based on a fictitious account of atrocities supposedly committed by Iraq against Kuwait. It was intentionally manufactured by Bush Sr, in collusion with Kuwait’s leaders, complete with a phoney heart-rending professional script written the by the notoriously unscrupulous PR “reputation management” firm Hill + Knowlton and rehearsed and “acted” by the daughter of the Kuwaiti ambassador.

The second Gulf War, manufactured by Bush Jr in collusion with the “defense industry”, was based on false, completely-invented “evidence” that Iraq had WMD.

In both cases the US intelligence cartel carefully constructed “intelligence reports” supporting the disinformation campaign, from alleged “trusted anonymous sources” which were published verbatim without review or scrutiny by the sensationalist, audience-hungry MSM.

When the stories were revealed as obvious falsehoods, there was no acknowledgement of error by either the Tweedledum or Tweedledee parties, or the MSM. Just swept under the carpet. The ends justified the means.

So now we have the ‘lab leak’ hypothesis that China deliberately or negligently leaked the CoVid-19 virus. As background for this:

Note that Biden has asked the loyal intelligence cartel to lead the lab-leak “investigation”, not health experts who are disinterested in war and have a passion for knowing the truth.

While we should of course acknowledge and investigate all plausible causes of a pandemic, we shouldn’t forget how the “intelligence community” seeded anxiety and doubt (and fabricated evidence) over WMD in Iraq — twice — as the pretext for unnecessary and ghastly, ongoing wars. They’ve done the same in Latin America and elsewhere. Please, please, let’s not get fooled again.

The intelligence cartel and their “defense industry” clients are unhappy that, while the MSM faithfully transcribed their fabricated nonsense about Russia paying the Taliban “bounties” for American heads in Afghanistan, some sources actually wanted evidence, and when none was found, the embarrassed MSM mostly stopped talking about it. Don’t want that happening again.

My second concern is that we know almost all (perhaps all) pandemics are zoonotic in origin, and as long as we keep on factory farming, harvesting exotic species, and deforesting the planet’s last wilderness, there is a huge risk of many more, much worse pandemics in our future, without any labs needed to manufacture them. The ‘lab leak’ hypothesis, if it continues to gain credence in the popular mind, will provide yet another cover for the industries perpetrating these outrageously dangerous ‘farming’ practices. “See, it wasn’t us, it was a lab leak”.

If the intelligence cartel faithfully reports that the lab leak theory has some plausible evidence supporting it (they cannot and need not disprove any of the far more compelling causes), as Biden clearly wants them to do, and the MSM then dutifully report this, then we’ll see the embedded warmongers’ op-ed shills cry out for retribution, and then Biden will use this as a pretext for military sabre-rattling, sanctions, duties, and other xenophobic acts (with the full support of Republicans). If so, the con will have been perfected, and can then be used again to justify any war against any trumped-up “enemy”, anytime. All the players are in place, waiting to dutifully do their part.

I’m afraid I’m about to be proved right. If so, you read it here. If I’m wrong, I will be deliriously happy to admit it.

11 Responses to The Lab Leak Hypothesis: Iraq WMD All Over Again?