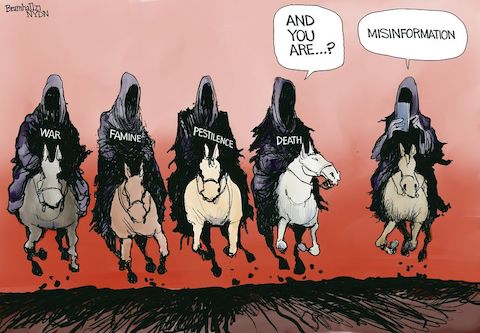 cartoon by Bill Bramhall in the NY Daily News

So I was both challenged and relieved by an astonishing article entitled Bad News in the September edition of Harper’s magazine (the whole special issue is worth a read), written by Buzzfeed’s Joseph Bernstein. Joseph’s compellingly argued thesis is (my paraphrasing):

Joseph scathingly lists the long-standing dysfunctionalities of the American political and social culture that have contributed to so many believing so many “crazy things”, and the whole article is worth reading and thinking about. As for social media, he writes:

Facebook is full of ugly memes and boring groups, ignorant arguments, sensational clickbait, products no one wants, and vestigial features no one cares about. And yet the people most alarmed about Facebook’s negative influence are those who complain the most about how bad a product Facebook is. The question is: Why do disinformation workers think they are the only ones who have noticed that Facebook stinks?

It’s possible that the Establishment needs the theater of social-media persuasion to build a political world that still makes sense, to explain Brexit and Trump and the loss of faith in the decaying institutions of the West. The ruptures that emerged across much of the democratic world five years ago called into question the basic assumptions of so many of the participants in this debate—the social-media executives, the scholars, the journalists, the think tankers, the pollsters. A common account of social media’s persuasive effects provides a convenient explanation for how so many people thought so wrongly at more or less the same time. More than that, it creates a world of persuasion that is legible and useful to capital—to advertisers, political consultants, media companies, and of course, to the tech platforms themselves. It is a model of cause and effect in which the information circulated by a few corporations has the total power to justify the beliefs and behaviors of the demos. In a way, this world is a kind of comfort. Easy to explain, easy to tweak, and easy to sell, it is a worthy successor to the unified vision of American life produced by twentieth-century television. It is not, as Mark Zuckerberg said, “a crazy idea.” Especially if we all believe it.

So if we want to be concerned about the nonsensical, potentially destructive beliefs of so many of our fellow citizens, we should not be blaming social and other media or trying to “fix” them, but asking ourselves how such preposterous beliefs came to be so widespread in the first place — probably long before social media (and the responses of many to climate change, systemic racism, and CoVid-19) brought these preposterous beliefs to our chagrined attention.

For example: If we want to understand skepticism, in the US especially, of the pronouncements of public health experts about the pandemic, we might start by appreciating that the US health system has evolved to be an utterly and obscenely bloated and inept bureaucracy, offering a pay-as-you-go (if you can afford it) two-tier system that has evolved to benefit for-profit insurance companies, for-profit pharmaceutical companies, extravagantly expensive medical schools, self-entitled corporate executives and extremely rich citizens, and the politicians whose campaigns they fund, and no one else.

As a result, as many Americans use “alternative” medicine resources (many of them shady and even dangerous, like homeopathy and faith healing) as use the expensive, dysfunctional “primary” healthcare system. Most Americans have in one way or another been abused (by neglect, malpractice, or misinformation) by the US medical system, which is, in fact, one of the leading causes of death in the country. So when someone suggests that the latest mandates (which seem to change all too quickly with the political winds), vaccines, and other impositions of the pandemic are fraudulent, there’s a lot of people who are already predisposed to believe that’s true.

What’s more interesting, then, than the role the social and other media have played in providing a venue for the expression of extreme distrust, is what lies behind our propensity to believe they have played any role at all? Americans elected Nixon, and Reagan, before there were social media. They built bomb shelters, believed “better dead than Red”, and held anti-communist witch hunts. They fell for religious and political bigots, organized vigilante groups and worse, believed in absurd and deadly cures for physical and mental diseases, and joined all manner of cults. Why should the 21st century context for what people believe, and are prepared to do in support of those beliefs, be any different? The average American, according to a recent Forbes report, reads at below a sixth grade level of comprehension.

So what if we were to acknowledge that social media are just over-hyped bit players in a bewildered world that has always been prone to believing falsehoods because they’re more comfortable and consistent with what people want to believe, than the truth? What do we do then?

Well, we could ridicule them, get outraged by them, shun them, or dismiss them as “deplorables”. Or we could reach out to them, without expectations, and understand how they came to believe what they believe. Not that we’re going to change their minds. Sorry, idealists, that ain’t going to happen. Any more than you’re going to join the ranks of the Trumpists and Brexiteers and born-again creationist hordes and conspiracy theorists and faith healers and QAnon groupies. But just to understand where we stand. We, plural.

Our human civilization culture, with its 7.8B hostages, is collapsing, ecologically, economically, and, inevitably, to some extent socially as well. We all sense it. The evidence is everywhere. Sooner or later, as collapse takes hold, we are going to have to start to build local communities from the ground up with the people with whom we find ourselves. Some, perhaps most, of those people are going to believe, and believe in, some ludicrous things, things that will horrify and appal you, and you’re not going to talk them out of their beliefs.

In the meantime, if you’re paying for advertising, especially on social media, Joseph’s article should convince you that you’re being had. If someone in the business of persuasion — a corporation or a politician or a media ‘representative’ or a guru or an ‘influencer’ or a movement ‘leader’ or an op-ed writer — tries to sell you something, anything… caveat emptor.

But then, if you were going to buy what they’re selling, you would have bought it anyway. So… never mind.

PS: Bonus: Joseph is interviewed by Harper’s web editor on this podcast.