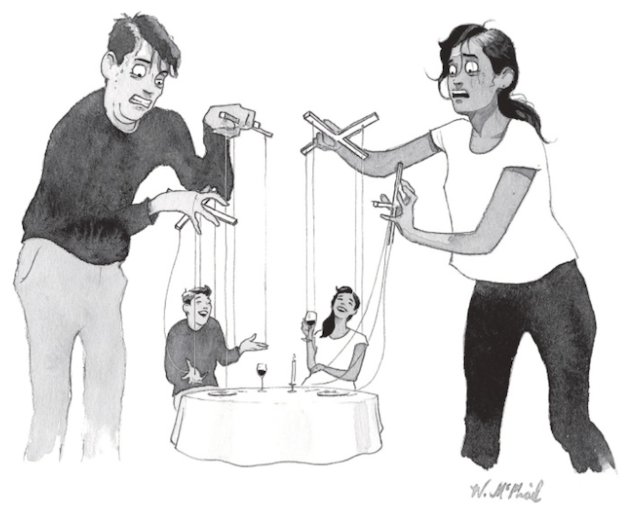 It’s very strange regularly being triggered into a state of anxiety, while “knowing” intuitively and intellectually that there is nothing to be anxious about.

It’s very strange dealing regularly with people who are progressive in their beliefs and intentions, but who are so suspicious and frightened of ‘government’ that they sabotage many of the actions that would further their goals and desires.

It’s very strange watching bright, informed people embrace bizarre beliefs that completely undermine their credibility in other areas where they are making cogent and important arguments.

These are strange times we live in. This is, I suppose, what collapse looks like. 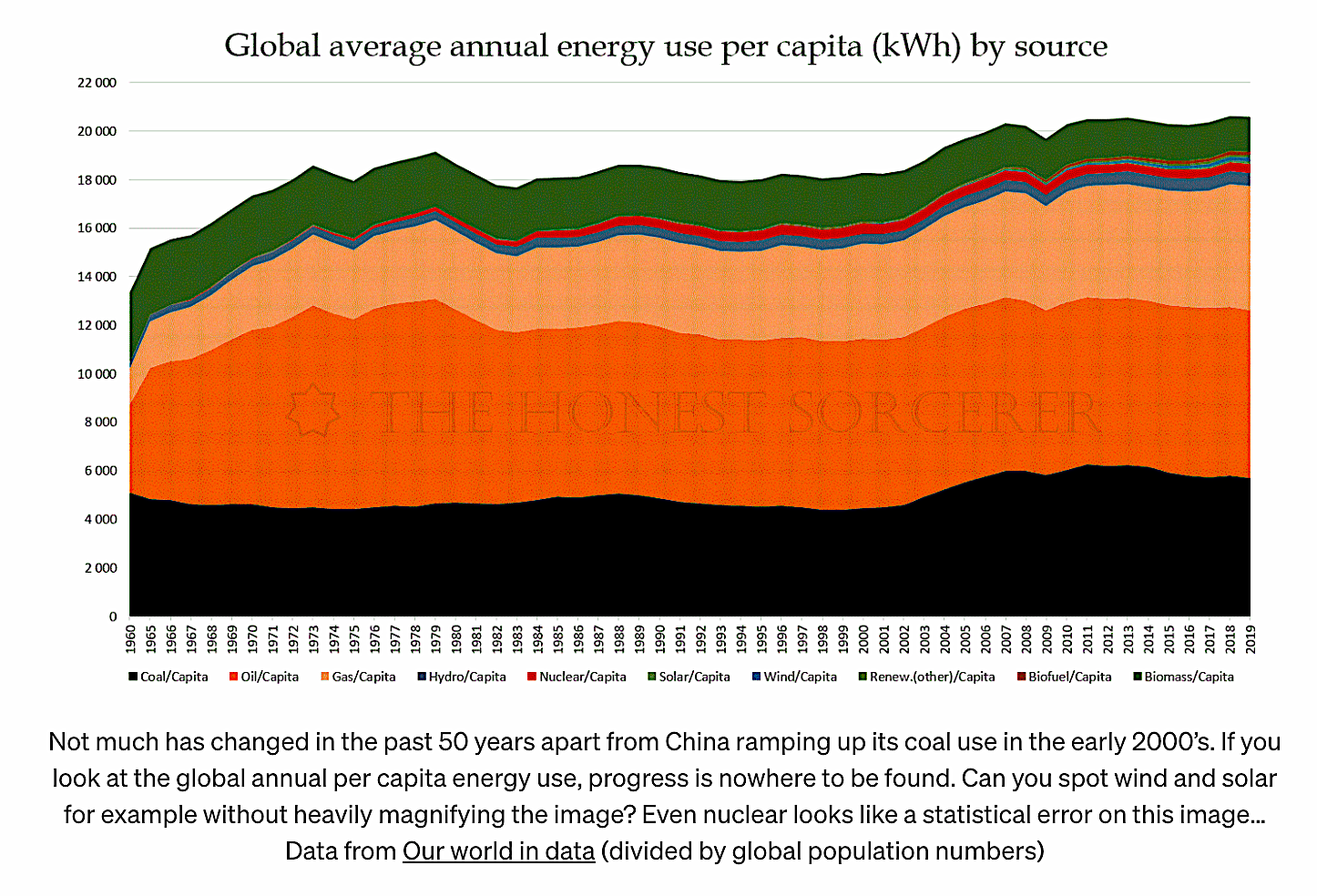 Overshoot and our de-growth future: The Honest Sorcerer explains what happens when you can’t get blood (or oil) out of a stone, as the supply of affordable energy dries up. The chart above is his, showing our progress toward so-called “renewable” energy. We all know what “needs” to happen, and we also know it’s not going to happen.

Bill Rees on sustainability and collapse: A useful recap of Bill’s argument that collapse is inevitable and human population will soon drop by as much as 6B people:

H. sapiens is inherently – and even predictably – unsustainable. The human ecological predicament is the product of base human nature reinforced by an ingrained, increasingly global, but radically maladaptive growth-based cultural narrative. Modern techno-industrial (MTI) society cannot be ‘reformed’ to mesh harmoniously with biophysical reality.

The collapse of our narratives: Murray Grimwood argues that a significant part of our anomie, helplessness and anger can be attributed to the fact that, for the second time in a generation, the dominant culture’s narratives are collapsing, having lost every shred of credibility, but without anything to take their place. What would we do without our stories? Thanks to Phil in NZ for the link.

Our inability to face our fears, including our fear of death: XR’s Roger Hallam (starting at 7’00” of this video) rambles all over the existential place about our lack of “spiritual congruence”, our addiction to “atomized rationalization”, the non-existence of the separate self, the courage of resistance that calls us only when we work in community, and the essential idea of service to the other instead of the absurdity of “enlightened self-interest”. Weird and fascinating.

You can’t get there from here: There’s a lot of discussion in climate change and other activist circles about so-called “Game B”, another way of living and acting and what it would take to get there. This naive simplification of massively complex problems to simple game theory has been around for generations and continues to enthral wishful thinkers. Remember Charles Reich and “Consciousness III”? Here’s a like-minded guy who claims to have all the answers. It makes for sad and disheartening reading to think people can still be so unaware about how the world really works. But there we are. We’ve all been there at some point in our lives. Thanks to Jae Mather for the link.

A precursor of what’s to come: James Ross Gardner harrowingly describes the three staggeringly record-breaking days in June (not even summer yet!)  during the “Heat Dome”, a “once-in-a-millennium” event that killed hundreds if not thousands in the Pacific Northwest, one of the most affluent areas on the planet, and which will soon become commonplace everywhere as climate collapse accelerates. 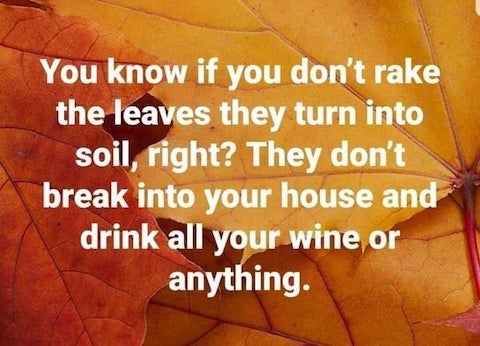 From the Potentially Inappropriate Memebrary For Historians and Literaries FB Page

Finding the mother trees: UBC prof Suzanne Simard writes about how understanding how trees communicate and cooperate can teach us an enormous amount about how to build and sustain community and society. Sadly, her work is being coopted to greenwash some of Canada’s most egregious forestry corporations, such as Canfor, Interfor and BC Timber Sales.

Kate Raworth’s “doughnut economics” takes hold: David Bollier explains why, despite its broad endorsement worldwide, it has been shunned by the economics establishment. Meanwhile, Amsterdam is looking to implement it as a decision model for development.

What if Facebook disappeared?: Could we find a good replacement for it, for small businesses, virtual associations and families that now depend on it? Are there grounds for taking it down because it’s too popular? What exactly is Facebook now, anyway? Hank Green dissects the issue brilliantly. Hint: It’s a lot about feeding our propensity to like feeling “righteously superior”, and the fact that, rather than just “hosting content”, they decide which content gets hosted, and even more importantly, which content gets promoted. Bonus: Hank also tells other ulcerative colitis sufferers (like me), what a colonoscopy entails and why it’s worth the risk. (Is my hesitancy analogous to that of the vaccine-hesitant? Hmmm.) 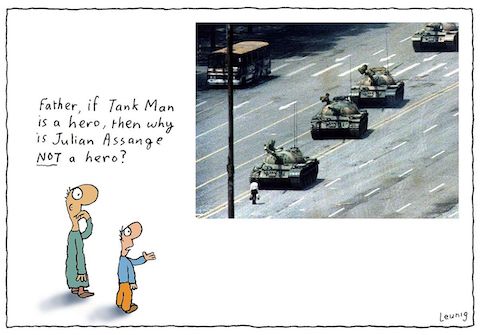 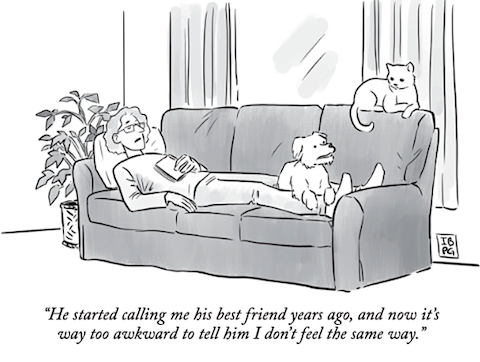 Potentially inappropriate: The Potentially Inappropriate Memebrary For Historians and Literaries Facebook Page is hilarious and completely addictive for people sufficiently familiar with literature, history and the arts to get the references.

Life and work: Liana Finck does a mind-blowing sketch of both. It took me an hour of study of fully appreciate it. 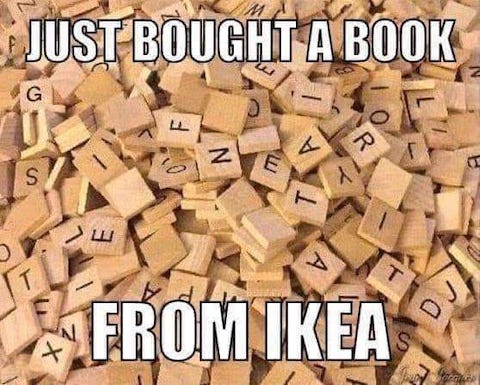 From the Potentially Inappropriate Memebrary For Historians and Literaries FB Page, posted by Doug Crowe

From Jenifer Lewis on The Problem with Jon Stewart: On complaints that mask mandates are a form of oppression: “Black people have been dealing with oppression for 400 years. They picked cotton. You just have to wear it.”

From Indi Samarajiva: “Democracy is like a bicycle–if you’re not moving forward, you’re falling off… American democracy is not free, it’s freemium, and the paid service is much, much better.

From Forbes magazine: “54% of U.S. adults 16-74 years old – about 130 million people – lack proficiency in literacy, reading below the equivalent of a sixth-grade level.” That’s the majority.

A priest, an imam, and a rabbit walk into a bar. The rabbit leans over to the bartender and says, “I don’t want to alarm anyone, but I think I might be a typo.”

I went into Starbucks and asked for their mildest roast. They said “you have very average ears.”

5 Responses to Links for the Month: October 2021