This is a work of fiction. 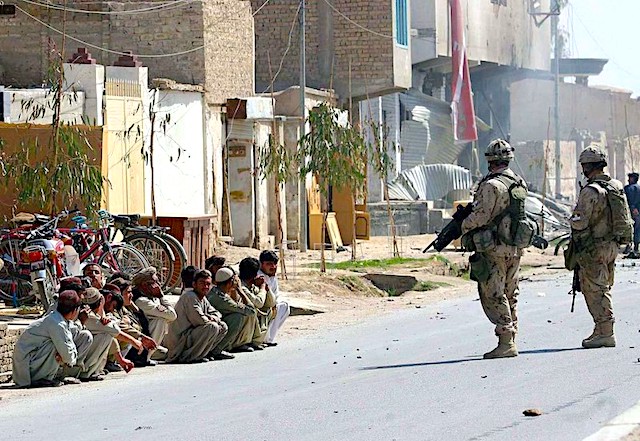 I saw him pretty often on my trips to Loblaws grocery last year. He looked old and tired. He wore camouflage pants and a torn white tee shirt, and always looked around warily for the store’s security staff, who would regularly shoo him off ‘their’ grounds. I usually put whatever change I had in my pockets, including loonies and toonies, in his cup, as I walked to, or from, the store entrance, and nodded and smiled to him. He always smiled and said “Thank you”.

The last time I saw him, he had made a new sign, which he held up as people entered or left the store. It said:

Half of all moneys raised go to feed starving Afghan children.

“So-so,” he replied. “Most people don’t believe me, even when I show them this and assure them it’s not for the Taliban.”

He held out a thank-you letter and tax receipt from an Afghan charitable organization, in English, Dari and Pashto. It was for AFN 10,000, which he told me was about $150 Canadian. “Half of what I made here last month. I don’t lie. The kids there need it more than I do.”

“Good for you, man,” I said. “There are lots of needy people — what made you decide to give it to Afghan kids?”

He looked at me forlornly. “I served there,” he replied. “Did three years out of the fourteen Canada was part of the occupying force. It was a total failure from day one, and the Americans were there for twenty years. And now Biden has seized all the humanitarian funds in bank accounts set up to help Afghan citizens deal with the sanctions and the famine. It’s criminal. He’s taking the food out of Afghan children’s mouths. So I try to do something.”

No one, I noticed, was listening to our conversation. They walked by and wheeled their carts around us as if we weren’t even there.

“You were there on the ground for three years? What was your sense of the place, and the people?”

“My grandfather came to Canada from Pakistan,” he replied. “So I learned Urdu and some Pashto from him when I was little. Pashto is what’s spoken in Kandahar, near where I was stationed. So unlike most of my colleagues, I could actually speak with the locals. Want to know what they told me?”

“‘If you want to help us’, they told me, ‘listen to what we need. We don’t need your help fighting ISIL or liberating our women from the Taliban. What we need is help rebuilding the social fabric and infrastructure of this burned-out, hollowed-out land, that’s been destroyed by generations of occupying armies, wars, and deliberate, thoughtless destruction. What you call scorched earth I think. Taliban are not nice people, but they can help us do this, in our own language. We need help to rebuild our destroyed schools, but we don’t want your help telling us what should be taught in them. And the other thing you need to know is that Kabul is not Afghanistan. It is its own separate world, full of corrupt men. When you deal with them, you just make our situation worse.'”

“That’s what they told you? How did you feel about that?”

“I tried to put myself in their shoes. I know that if this had happened to us in Canada, we would want humanitarian aid but without strings attached. We would want to be trusted to redevelop our destroyed country in our own way. So I tried to help, but the commanding officers of all the occupying forces, including ours, didn’t understand. I kept getting in trouble, and finally I was discharged. PTSD, and a bunch of injuries from landmines. But I get by. I’m not starving like most of the kids in Afghanistan.”

“Wow, that’s quite the story. Sorry you’ve had to face that. Must have been awful. I confess that the fact that women in Afghanistan have been treated so poorly by the Taliban probably explains why there’s been so little outrage about Biden’s theft of humanitarian aid funds from Afghanistan.”

“Yeah, I get that”, he said. “I hate all religions, and the horrible violence they have caused throughout history and continue to cause today. Thirty-one countries still routinely perform genital mutilation on young girls in the name of religion, and we don’t have embargoes or sanctions against any of them. And international businesses are still operating in Florida and Texas, despite those states’ repudiation of the basic rights of women there. We can’t legislate against ignorance and superstition, and even when we prohibit discrimination it just drives it underground. We’re all doing our best. There are atrocities going on everywhere. That doesn’t justify stealing food money from the mouths of children.”

We were quiet for a moment. I continued to marvel at how the shoppers with their loaded grocery carts continued to ignore us. In much of the US they seem to taunt and beat and lock up the homeless. Here, we just pretend they don’t exist. Finally, I spoke up:

“Thanks for this conversation; it’s been enlightening. Can I ask you the story of the toad pin you’re wearing?”

“Sure,” he replied. “The area I was stationed in was called Frogs’ Hollow. After the Canadians put in a water treatment system beside the base, the area was practically overrun with frogs. Frogs are really well adapted to the beautiful, arid conditions in the country. When the rains come, they explode into life, and the rest of the time they just wait, quietly, patiently, in dormancy. Kind of like the Afghan people, perhaps, except they’ve now been waiting for a long, long time.

“So,” he continued, “the frog, and the frog pin, is kind of my way of saying that no matter how bad it gets, no matter how long you have to wait, one day the rains will come, finally. One day it’ll be our turn.”

At that moment he spotted the store security guards walking toward him. I was annoyed, ashamed, other feelings I couldn’t quite understand. I squared myself to tell them to leave him alone, but he shook his head, saying “It’s OK,” and then waved to them and said “It’s fine officers, just talking to my friend here… on my way now!”

And as he turned, lifting two large canvas bags and walking away from the store, he smiled at me sadly and said “One day…”