The End of Ideas 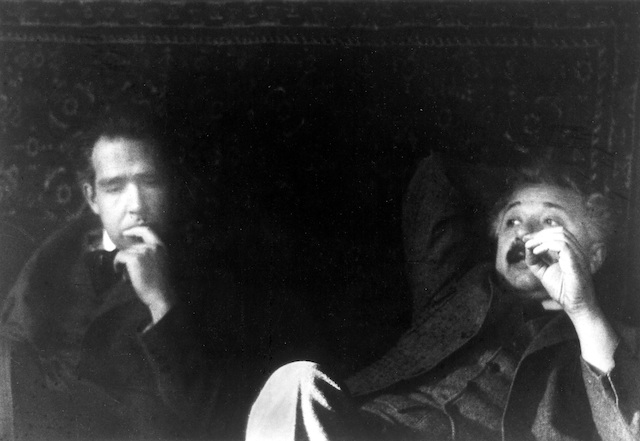 I believe in intuitions and inspirations. I sometimes feel that I am right. I do not know that I am… I am enough of the artist to draw freely upon my imagination. Imagination is more important than knowledge. Knowledge is limited. Imagination encircles the world.

— from a remarkable and far-reaching 1929 interview, during which Einstein disavowed the existence of free will; photo above of Einstein with Neils Bohr CC0 via pixy.org

Yesterday I watched a video of a recent discussion between the late David Graeber (whose cause of death, suddenly, two weeks ago, at age 59, in Italy — CoVid-19?, poisoning?, suicide? — has still not been disclosed) and the vapid Peter Thiel, Trump-supporter and founder of the ICE-enabling Palantir data-mining corporation. Unsurprisingly, Peter Thiel had nothing interesting to say, while David, who was always a better writer than speaker, rambled on but made some fascinating and important points about the current state of the world.

One of the points he made is that, when technology companies switched focus in the early 1980s from technologies that deployed new scientific knowledge, to technologies that were all about information capture and reuse, it effectively spelled the end of innovation in western society. Indeed, this point has been made often by others, but David expresses curiosity about why this happened.

My sense is that it was mainly because the people with wealth and power at that time — the people with the resources to decide how money ostensibly for innovation was to be spent — were largely a group devoid of imagination. Often glamourized as alt-culture technology geeks, the current cohort of technology multi-billionaires (I needn’t name them) are basically kids who grew up with television, video games and other devices that offered them no practice in imagining anything daringly new. So IT is essentially an industry that makes its billions remixing old ideas and adding a high-gloss SFX varnish to them.

And in parallel to the unimaginative technology leaders we’ve had to deal with equally unimaginative financial system leaders, who seem to think innovation is repackaging worthless investments to look as if they actually have some value, to keep the existing dysfunctional financial systems and unsupportable financial valuations and debt loads going.

Our technology and financial “leaders” in the global dominant caste are not unique in this. They are a microcosm of a whole generation (or three) who simply can’t imagine anything really new or different, because they’ve never received any practice imagining anything. They’ve been passively fed novelty throughout their lives, so they have no need or want to create their own. I’ve written ad nauseam about the imaginative poverty of our current world, so I won’t go on about that here. I’m more concerned about what this imaginative poverty means for our capacity to deal with the accelerating crises posed by civilization’s current collapse, as an extension of the collapse of our global ecology, planetary climate, and global industrial “growth” economy.

Those with the wealth and power today to provide the needed space and resources to creatively address collapse are utterly lacking in vision, and lack the capacity to envision radically different approaches to dealing with current crises, as a result of their imaginative poverty.

A prime example of this is the incapacity of the technology sector to innovate one of the most important technologies in history — the ballot. Everyone appreciates that the current system of first-past-the-post representative democracy no longer functions (corporate interests make all important political decisions regardless of who the elected representatives are). Everyone appreciates that elections can be stolen by disenfranchisement, by rigged systems (gerrymandering etc), by hackable voting machinery, and by disinformation.

This is not a difficult problem to address with a little imagination. We don’t need to be held hostage to the precarities of elections every 3-5 years; there are many ways to engage and involve thoughtful citizen participation on an ongoing basis and in so doing inform and ratify political and economic decisions almost continuously. It would be a radically different system of “checks and balances” from what we use now. But it’s a challenge of imagination, not of technology.

Likewise a guaranteed annual income (like free universal health care and education) is a completely feasible and affordable idea, one that would save far more (in health, medical, police and other costs) than it would cost, if only we had the imagination to think it through to fruition — not as an incremental change to existing systems, but as a completely reinvented system that would render those doddering existing systems obsolete.

What does it mean to say that 1980 marked the end of a remarkable age of ideas — really the end of ideas for our whole culture? For what have we produced that is truly novel, rather than an obvious adaptation or incremental improvement (such as the Internet and its crappy, unimaginative “apps”), in the forty years since? How has technology actually made our lives better, healthier, happier, in all that time?

Because I see most of our centralized systems — social, political, economic, financial, legal, educational, health care etc — as in a process of rapid collapse due to their unmanageability, unsustainability, and incapacity to adapt to the evolving needs of the moment, my guess is that any true innovations from here on in will arise from the ashes of collapse, and are therefore still a ways off.

When our currency systems collapse, for example, we will need a system better than barter to replace them. In the absence of imagination, urgent need will probably drive us to try something that looks like currency — scrip for example, as was used after the collapse of the Soviet Union and has been used after currency collapses in hyper-inflationary nations. If we’re lucky (since by then it is at least possible that the current toys that deprive young people of imaginative practice will have become unaffordable and hence unavailable due to economic collapse), we will instead, or eventually, (re-)invent a “gift” or “generosity” economy, one that requires no currency at all. It makes far more sense than the systems we’ve been brought up to believe are the only systems that can work. At least, it makes sense if you have the imagination to appreciate how they could work, and why they’d be so much better.

Same for every other system. As the old systems collapse (though too late to prevent our ongoing global ecological collapse, with its ghastly consequences) we will have no choice but to replace them. We will try the familiar first, and will find that none of the familiar systems can work in a post-collapse world. Then, if we’re fortunate, we’ll be able to come up with some imaginative alternatives. Being able to do so has kept our species extant through many past crises, including drastic climate change and system collapses.

In the meantime, as collapse worsens, best be prepared for some really dumb, stale, unimaginative “solutions” to be proposed and tried. Our brains have been shrinking since the earliest human civilizations began self-domesticating, and we’re all doing our best with what capacities we have.

Once we’re liberated from our dependence on industrial civilization’s failed systems, my guess is that, over time, we will discover it makes no sense to repeat its mistakes. By then, I sense, we will have of necessity regained the capacity of imagination. And then, what we might create, in radically smaller, relocalized societies, is nearly unlimited. I feel this is right, but I don’t know it. I can only imagine.

5 Responses to The End of Ideas