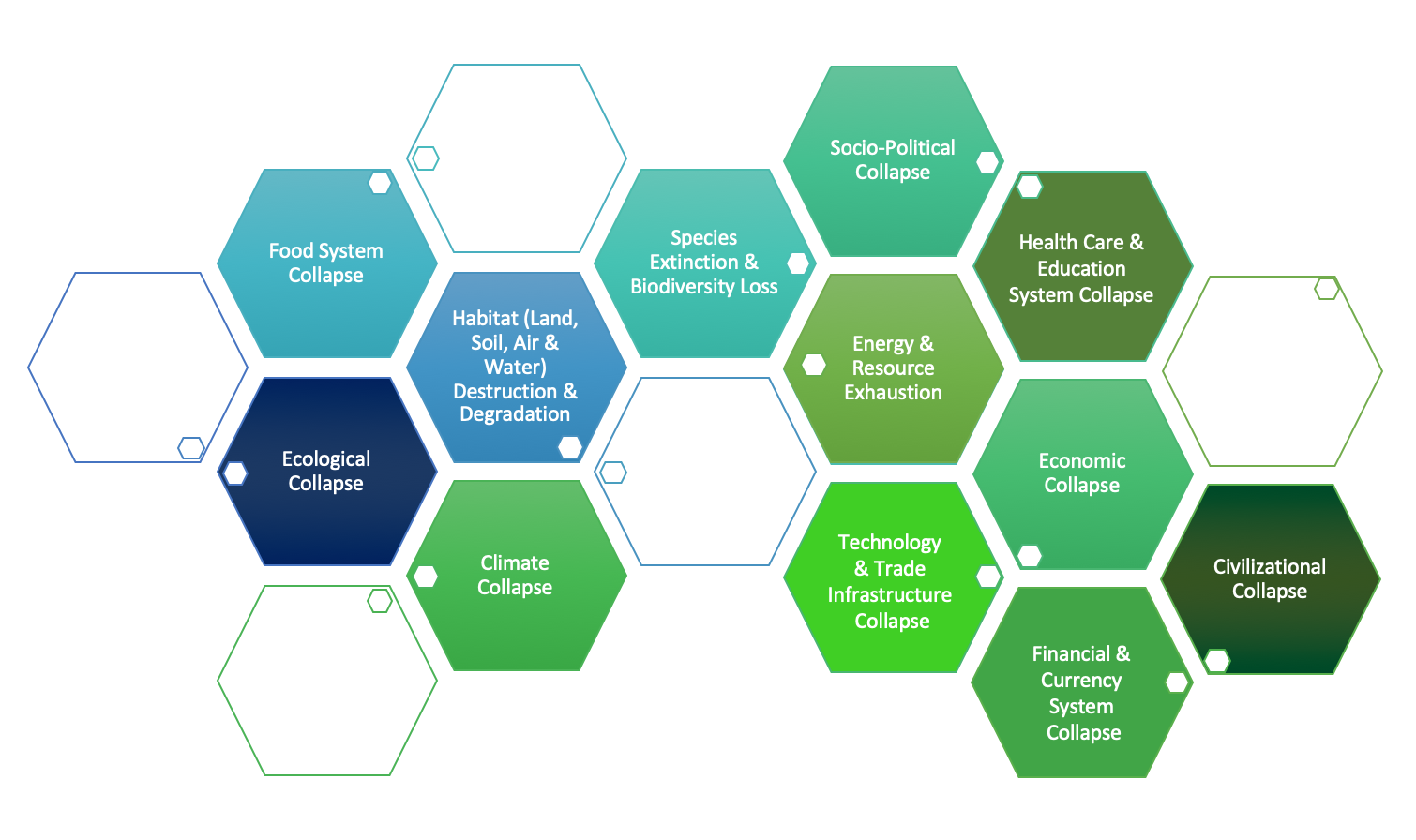 For many years, my writing about collapse centred around the “3 E’s” — economic, energy, and ecological collapse. They are of course connected. An economy cannot be maintained when severe weather events keep crashing the infrastructure everywhere, or when climate collapse produces 2 billion climate refugees or makes large parts of the planet unfit for either habitation or agriculture.

Likewise, we cannot prevent an ever-worsening ecological collapse when we apply a religion of never-ending industrial growth and increasing human population far beyond what our finite earth systems can support. And our economy depends entirely on cheap, affordable energy which, even with today’s massive subsidies of fossil fuel production, is running out. Most of it will likely be left in the ground not because it will reduce the severity of climate change, but because as our economy stumbles it will simply be too expensive to extract. So decline in energy use may mean both a brief respite for the planet’s ecological systems and a precipitator of collapse of our economic systems.

While all this is still true, I’ve come to realize that there are many more inextricably interconnected systems that comprise the earth (ecological) systems and human (civilizational) systems on which our lives depend, and that they are all poised to collapse. Some of these are listed in the chart above.

History is replete with examples of political, financial and economic collapse, and often when one fails the rest of these systems follow. Much of the world already lives in cities and countries that are in fairly advanced stages of both civilizational and ecological collapse. I have argued that the collapse of our human systems is likely to precede the collapse of the world’s ecological systems, which I think will be more gradual. But ecological collapse is still accelerating, and my sense is it will almost inevitably inflict the final blow on civilization by the end of this century.

The many economic crashes we have seen in past, and which various countries have seen lead to panic and even starvation, have occurred frightening quickly — in a matter of months when a “tipping point” is reached. The problem now is that our economy is so tightly globally integrated, and so lacking in resilience (“efficiency”, being cheaper and more profitable for corporations, has been pursued instead) that the next crash is highly likely to be global. And since the mechanisms to recover from a crash have now all been exhausted (we used the last of them up in 2008), when it happens it will probably be a ‘permanent’ (unrecoverable) collapse.

As I’ve written about often, this will mean a collapse of substantially all currencies, businesses, international (and most domestic) trade, the job market, and the value of real estate, investments and pensions. This will likely lead, as it has before (but this time globally), to the bankruptcy of governments and the devolution of almost all economic activity by default to the community level. We will essentially have to start again to build, community by community, economies that are sustainable and radically relocalized, rather than predicated on the current centralized Ponzi scheme of perpetual double-digit growth and ignored externalities.

Many writers on collapse have expressed the hope that we can manage, with difficulty, collapse of our economic and political systems, while keeping our social systems more or less intact. Social disintegration, if it happens, will create vastly more suffering than the collapse of our economic, financial and political systems (and the educational, health care, technological infrastructure and other systems that depend on them).

As someone who believes we’re all doing our best, my sense has always been that salvaging our social systems should be possible, and will be essential to avoiding chaos as the rest of our systems collapse. But of late I’m becoming less confident that that is possible.

What exactly are our “social systems”? They are, in essence, a vast array of tacit agreements on how we will individually and collectively behave. These agreements are built on a mutual trust that it is in the collective interest of everyone to respect them. Some examples:

I would argue that since the 1980s — just 40 years ago — most of the population in most nations has moved from a profound respect for these agreements to a position of no longer accepting most or all of these agreements. That is neither a good nor a bad thing in itself, and it is certainly understandable given the current utter dysfunction of most of our human systems. But the prevalence of this new antipathy towards any basic social contracts has profound implications for social cohesion, locally, nationally and globally.

Here are some examples of how this has manifested since it seemingly began in the reactionary Reagan/Thatcher era:

These betrayals and abrogations of the agreements by which our societies function were initially propagated mostly by the privileged castes, with the often-overt encouragement and enablement of governments. It is not surprising, then, that the rest of the population, seeing itself discriminated against and oppressed by the privileged castes’ disregard for these agreements, are showing a similar disregard for these agreements, saying:

So the population, no longer able to discern what they can and can’t believe and who they can trust, are filled with fear, bewilderment, rage and hopelessness. With trust gone, these social agreements are now, in many countries, in tatters.

And without them, the social fabric that has kept 7.8B people in line, and functioning at least superficially as a civil society, is rapidly tearing apart.

In many parts of the world where collapse is well-advanced, the members of constituent communities have learned to create a new local, social fabric. That may be in intentional community, or in a gang or cult, or less formally just in an evolving sense of “who’s in our community and how are we looking after each other?”. They are practicing, trying to figure out how to create a local economy, politic, health care system, education system, and social systems, in the vacuum left by government neglect and incapacity, and by the abandonment and abrogation of basic social agreements. They have forged new agreements, for better or worse. Some of the ones I’ve seen are amazing, while others are horrifying. We should be watching, and learning.

In parts of the world like (most of) ours where collapse still seems a way off, there hasn’t been much if any thought given to how, if the social fabric that is now so badly torn cannot be mended, we are going to follow “third world” examples and create new agreements that will work well-enough for us to survive.

It won’t be easy. We are like dogs that have been looked after all our lives and are suddenly witnessing the breakup of our family and the possibility we are going to have to make do for ourselves, in collaboration with the other dogs suddenly in the same position. We have become so dependent on civilization’s systems we have never given a thought to having to create whole “new” societies, from the bottom up, from the ruins of the one that is now quickly disintegrating.

Where once I was confident we’d muddle along, I now fear it may be a more brutal adaptation. We do have good intentions, but that’s about all we have going for us right now. We suffer from severe imaginative poverty (from 40 years’ lack of exercise of our imaginations). We have almost no residual skill or experience in community-building, consensus-building, or living and working in self-sufficient and self-managed communities. It may take two or three generations of experiment and practice to build up the skills and experience to be able to do what wild animals do innately.

We are inevitably, due to lack of imagination and better models, going to try to create new societies similar to the only ones we were familiar with, even though they were hopelessly dysfunctional and are unworkable in a world where all of the systems in the diagram above have already collapsed or are in the process of collapsing. We will probably try out neo-tribal models first, which will provide some useful lessons but likely won’t work well in our vastly diverse, vastly under-skilled post-civilization societies.

We will have to cope with the death throes of the top privileged castes as they desperately attempt to retain their wealth, power and influence. They will likely create a kind of neo-feudal model which will work for a while and then fail spectacularly once the “nobles” run out of money (and hence power; since most of their wealth is in real estate and “financial assets”, that shouldn’t take too long, but it will be chaotic). If you’ve ever lived in a “company town” you probably have a good idea how this works.

The biggest unknown in building post-civilization societies is whether some of the technologies we have produced during our civilization’s reign, such as nuclear and biological resources that have been or could be adapted for weaponry, could be used by very small groups of people to produce a global catastrophe, even before the catastrophes that ecological collapse is just now starting to present us with, weigh in. It really wouldn’t take a rocket scientist. (I’m much less worried about AI, nano-bots etc — that stuff takes a lot of energy to sustain, and I think we’ll run out before new technologies emerge that can start to rival in destructive capacity what’s already out there in military arsenals, power plants and laboratories.) And if neglected after collapse, all the existing nuclear power plants could melt down, and the mega-warehouses full of lethal chemicals could crumble, with disastrous consequences that could last for millennia.

The next biggest unknown is how severe the ecological collapse will be over the next couple of centuries. I think at least a small part of the planet will remain habitable to humans as this collapse unfolds, even without the energy-dependent, prosthetic, artificial environments in which almost all of us now live. But there are models that suggest otherwise. And it hasn’t been that long since the entire planet was wrapped in hot toxic gases that only microscopic creatures could endure. Even less time has passed since the entire planet was last covered in miles-thick ice. We can’t know.

If we can dodge these two bullets (and a few others equally as depressing), I still believe the human race can survive the collapse of global civilization, and in a couple of millennia, humbled, much smaller in number, and back to being a tiny and insignificant part of Gaia’s awesome experiment of life on earth, we might find our distant descendants living very happy, peaceful, simple lives, mostly free from stress and struggle. As Anna Tsing explains in The Mushroom at the End of the World, it will probably be a salvage-gift-and-scavenger society, similar and yet in ways amazingly different from how prehistoric humans lived.

That’s what I want to believe anyway.