Understanding Why (Part 1): Why War?

This is the first of a multi-part series that attempts to move past the grotesque propaganda for war that has once again enveloped us, and understand what underlies it, and whether our species, at least when under stress, always seems to end up resorting to wars, genocides and other inhuman atrocities, and why. 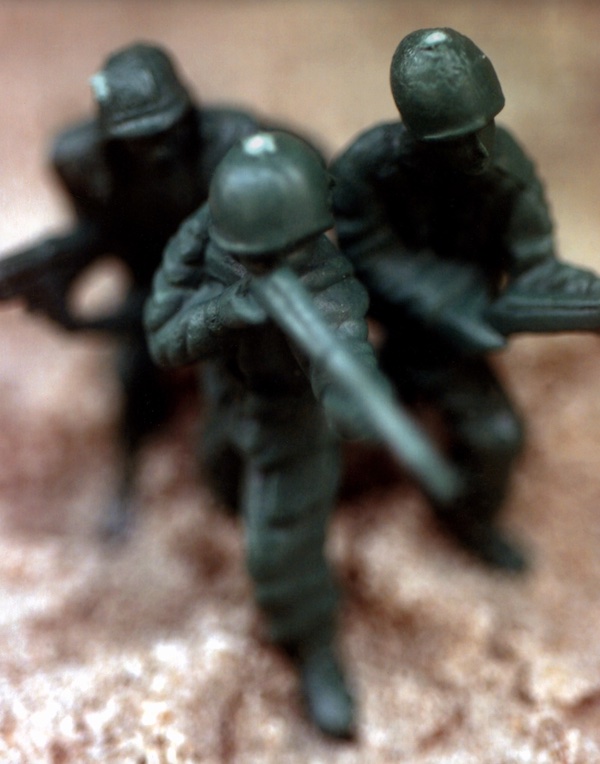 When I was a teenager, in the 1960s, we had a Black South African teacher (a refugee from Apartheid) who was so well-versed in politics and economics, and so articulate, that we cajoled him into holding after-school classes in current events for us. During those classes he provided us with newspapers and other documents that provided a radically different perspective on world events than we were getting in the “mainstream media” (mostly, in those days, the CBC, the Winnipeg Free Press, and the Globe & Mail.

He invited us to visit a little socialist bookstore in the north end of the city where we could read more, and we did. We bought Canadian Dimension magazine, feeling very daring and looking to see if the RCMP (responsible for “domestic security” and spying back then) were photographing people entering and leaving the store, as they often did. The Vietnam War was in full swing.

Our teacher was, of course, fired when parents caught wind of all this. But by then we’d learned to challenge the narrative that was almost universally espoused in the mainstream media. And, more importantly, as Mr September taught us, we’d learned to ask why things were the way they were and why people and nations did what they did. And, he told us, the reason why is never that “they are just evil people” or “they are insane” or even “they’ll do anything if the money is right” or “people are just gullible”. Search to understand why, he said, and you’ll start to understand how the world really works. Even Apartheid, he said, had an explanation, rooted in history and education and ways of thinking handed down from one generation to the next. Question everything and you’ll discover that things are rarely as simple as they might seem.

Ever since then, I have tried really hard to understand why wars and other atrocities have occurred repeatedly in our civilization’s history.

So, for example, I grew up with history textbooks like this one, written in 1947 and published by Canada’s Southam Press, which relates with zeal how the brave soldiers of the British Empire, fighting both cruel nature and the “savage treachery” of the “barbaric”, “ugly” Indians (who, unlike “their Indians” from the east, were mere “inmates” of a “miserable habitation”, wherein “the usual appendages of Indian houses, filth and nastiness were present in abundance”), built Fort Langley. The subsequent theft of First Nations land and the attempted genocide of First Nations peoples, launched from this fort, is celebrated in the book.

This is the Canadian history I was taught. When I dutifully wrote in my grade 2 notebook about how the brave New Canadians had been “torchered and scalped by the Indian savages”, the teacher’s only correction was to my spelling.

This book was written after Canada stole the property of, and incarcerated, Canadians of Japanese descent during WW2.

The systematic slaughter, brutality and oppression of a people requires that the perpetrators be indoctrinated to believe their victims are less than human, that anything less than utter ruthlessness will be taken as a sign of weakness, and that the possibilities for any kind of peaceful rapprochement or integration are nil.

That kind of advance indoctrination is readily in evidence in the accounts of just about every war in recorded history. War is an unnatural, deplorable, instinctively inhuman state, and it requires extraordinary, irrational and relentless hatred and disinformation to sustain. Yet our species has been almost continuously at war for centuries.

The whole ‘clash of cultures’ myth is based on the assumption that both clashing cultures understand why the other side believes and does what they do, which is basically a ridiculous, simplistic and dangerous assumption. In fact if we really understood the thinking and feelings that underlay both sides’ animosity to the other, war would be largely inconceivable. That is one reason why war-mongers like Putin and Biden rely so heavily on propaganda, censorship, and mis- and disinformation.

So what are the feelings and thinking that lead someone to propose, launch, or join a war against another group? To get at these, I think you have to be ready to keep asking “Why” until you get at what’s really behind it. Why are people xenophobic and filled with hate? What is it exactly that they fear or hate, and why? Where did this come from?

I think there are nine basic emotional reasons, if you keep asking “Why” often enough, that we go to war, and support wars:

These are not mutually exclusive, and often war-mongers and warriors have several of these reasons for supporting and participating in wars.

Let’s consider a simple, personal situation to illustrate these ‘reasons’. Imagine that a loved one has been assaulted by someone, and the police have said there isn’t enough evidence to press charges. How would you feel, and what would goad you into attacking the perpetrator?

These feelings, and their potential deadly consequences, are possible whether it’s immediately personal, or happens to someone, or a whole group of people, you don’t personally know, but whose story moves you. It’s very human. Our history books, and our novels and myths, celebrate these feelings and the violence they precipitate. The history books are written by the victors of war, and the novels and myths are written to enable and encourage you to relate personally, viscerally to the heroic protagonists.

But surely, you may say, no feeling person could simply sit and allow this (whatever the atrocity of the moment may be) to happen and not take action to right the wrong. That’s not just human, it’s basic ethics, common decency, no?

This of course assumes that there is a right and wrong, and that you understand completely what happened and why. It assumes that violence is the only way of dealing with violence. Which of course it isn’t, but it’s completely understandable and very human for us, in the heat of the moment, or in the face of endless provocations and reminders, to simply say: I support the fight. And even: I’m ready to join the fight. Pick your battle — Iraq, Ukraine, Yemen, social or racial justice, climate collapse, gang wars — I’m willing to bet there’s a point at which, on more than a few issues, you’re ready to take sides, give up hope on peaceful resolution, and support, or even participate in, violence against another human or group.

And, as human as this propensity is, I would also argue that it is always wrong-headed — there is always a better way, even if it is unclear and difficult to discern.

The most common reaction I get when I make this point is that when violence is being proposed or supported it is “defensive” — that to not support someone’s ability to meet violence with violence in their own self-defence is immoral. That is why the War Department is always called the Department of Defence. It is why almost all wars are launched on the premise of defence of something or someone — a beleaguered people, “democracy”, “freedom”, or some god or religion. It makes people feel righteous, and disinclined to object. What, you’re against democracy and freedom?

So, the two Iraq wars launched by the two Bushes were launched on the utterly false and professionally fabricated premises of defending Kuwait, and defending the west’s Mideastern allies from WMD, respectively. The real reasons for these brutal wars were far more complex, insanely difficult to “sell” to the citizens who had to pay for them and fight in them, and have never been seriously explored.

The Bushes were no more “evil” and “insane” for launching these wars than Putin was for launching the war in Ukraine (more about that in Part Two). But after all these years, we still have these two diametrically opposed and completely indefensible narratives for why so many millions have been killed, tens of millions maimed and displaced, and trillions of dollars wasted that could have been spent on desperately needed projects. And no one — not the anti-Islamic neocons, and not the anti-war liberals and moderates — knows why.

Each side got its simplistic answer, and stopped questioning further.

Until we start to seriously ask the question Why?, and move beyond the rhetoric, the propaganda, the disinformation, the censorship, and the oversimplification, we are never going to understand why our supposedly modern, informed human civilization lives under the pall of never-ending war. Or why the Doomsday Clock is stuck at a few seconds to midnight, at this perilous time when all our efforts and attention should be focused on ecological collapse and the accelerating Sixth Great Extinction of life on our planet.

In Part Two, I’m going to use the Ukraine War, and specifically the destruction of Mariupol, as a case study of the importance of asking Why?, and moving beyond the rhetoric, the propaganda, the mis- and disinformation, the censorship, and the absurd oversimplification of the narratives the leaders, media and spokespeople of both the west and Russia have (very successfully) shoved down the throats of their citizens about what is going on there. And why. Stay tuned.

5 Responses to Understanding Why (Part 1): Why War?