Pandemic of the Unvaccinated 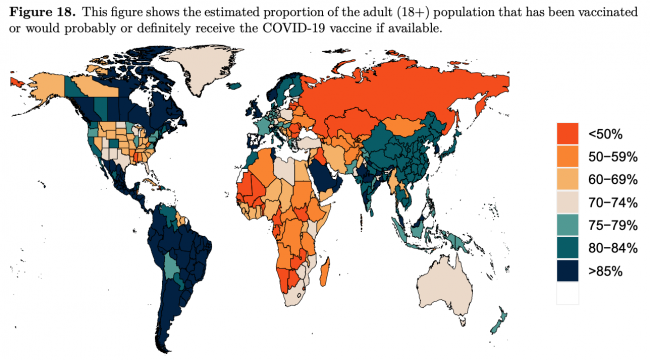 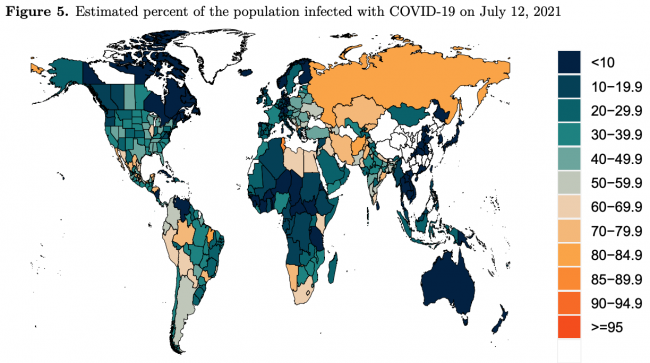 The danger now is in areas of vaccine hesitancy (orange in the top chart above), both to their own people and to those they visit in areas with low levels of infection (dark blue in the second chart above). So: Expect high rates and spikes in infections and deaths in central and southern US states, eastern Europe and central Asia. And if you live in Hawai’i, Canada, NW or NE US, W Europe, Japan, Korea, Taiwan, Australia or NZ, make sure you’re vaccinated before the borders are opened to those from the vaccine-hesitant areas, and keep wearing a mask in public indoor spaces and crowds, at least through the next few months. Data from IHME briefings, July 12, 2021.

One of the worst fears of public health officials seems to be coming true: the new CoVid-19 variants are so potent and transmissible that they are now dramatically increasing cases and hospitalizations in many areas where vaccinations have been low.

It was always a race against time, and it seems the forces of vaccine hesitancy and disinformation are winning the day. The fourth wave is turning into a pandemic of the unvaccinated and the vaccine-hesitant.

In the US, estimated actual deaths, which dropped to as low as 300/day at the start of this month, are now expected to soar back above 1000/day this fall and stay at that level for an extended period. This will increase the total US death toll to 1,025,000 by October 31, a full 80,000 more than the current death toll. Almost all the projected deaths will be among the unvaccinated, and over 90% of them will be in the 28 vaccine-hesitant states where levels of vaccination continue to lag as low as 35%. The 28 vaccine-hesitant states include all but the northeast (from VA north), and west coast states, Hawai’i, Colorado, Illinois and Minnesota.

New infections in the US, which dropped to as low as 78,000/day in June, are expected to soar to over 250,000/day in the fall and will stay at that level for an extended period, perhaps throughout the winter until either vaccine hesitancy abates or the % infected in vaccine hesitancy states (currently 40-50%) reaches herd immunity level — the hard way.

As masks in the US come off (use nation-wide has plummeted from 70% to 25%), this poses a danger not only to the unvaccinated in vaccine-hesitant states, but also to those in states that receive a lot of tourists or business visitors and have low overall infection levels. 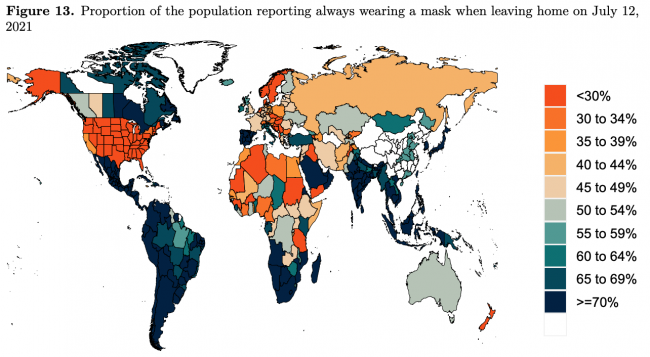 In Hawai’i for example, while 90% intend to be vaccinated and 62% already have been, only 7% have been infected, leaving 31% still vulnerable to infection from outsiders. As a result IHME predicts that by the time of full vaccination, daily infections will increase by a factor of 12, from the current 300/day to 4000/day, and the total Hawai’i death toll will soar from the current 500 to over 1100 by October 31. Hospitals there are expected to be overwhelmed in September through November. So the race is on to get the rest of Hawai’ians vaccinated before the unvaccinated tourist hordes arrive. For those familiar with indigenous history, there is a grim irony in this.

You might want to put off that ‘snowbird’ vacation at least until the new year.

The situation is less severe but still of concern in other states with to-date infection rates less than 20%: Washington, Oregon, Maine, Vermont, New Hampshire and Virginia, and all Canadian provinces. These areas likewise will likely face spikes in cases and hospitalizations as unvaccinated visitors come in before local vaccination is complete, though the impact should not be as severe as in Hawai’i, and the death toll in these locations is not expected to rise dramatically.

A similar situation is playing out in much of the rest of the world, with the additional complication that in many countries even those wanting vaccines can’t get them. For reasons that haven’t been fully understood, infection fatality rates seem much lower in most of Africa and south and southeast Asia, perhaps due to residents’ stronger immune systems due to prior exposure to coronaviruses. But for others: The unvaccinated in W Europe, Japan, Korea, Taiwan, Australia and NZ are at risk of infection from their own, and, as borders reopen, from the vaccine-hesitant in central and southern US states, eastern Europe and central Asia, and as well from many areas in Latin America, South Africa and south and southeast Asia where vaccines have been hard to come by.

Stay safe out there.