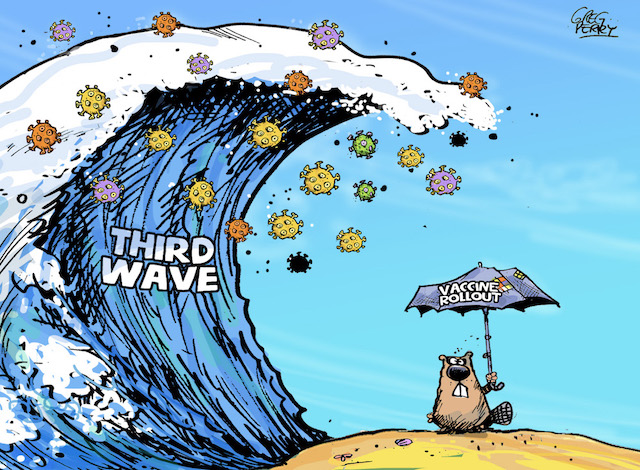 cartoon by Greg Perry in The Tyee If you’re not Canadian, substitute your national animal for the beaver.

PS Pirro, responding to my latest CoVid-19 post about this becoming a “pandemic of the unvaccinated“, wondered aloud why, given all the evidence of the crucial importance and effectiveness of the vaccines, so many people continue to act against their own best interests and refuse to be vaccinated, or even to wear a mask. Who benefits from this folly?, she asked.

This was my response:

Hi Peggy. I’m trying to stop judging people’s motivations and just provide facts, but you ask some very important questions. What underlies the “live free or die” mentality of so many, and not just in the US, who would rather die a ghastly death than admit their (obvious) dependence on governments and corporate cartels?

Who benefits? Politicians who know that by humouring the illusion of independence and free choice and a widespread ‘don’t tell me what to do’ attitude, they will get elected over ‘interventionists’ (socialists, liberals and democrats).

And I don’t think this antipathy to any government regulation or restriction is new, or uniquely American. I wonder what lies behind it, and whether distrust of authority, government, regulation and any intervention or public support for anything, is now so deeply entrenched that any sense of trust could ever be re-engendered?

The guy who most helped me understand this mentality of the “permanent white underclass” was the late, brilliant Joe Bageant. I had the privilege of visiting him while he was living in Belize, and hearing him expand on the explanations he provided in his extraordinary and prophetic 2007 book Deer Hunting with Jesus. In her review of the book, Eleanor Cooney writes:

From the church where his brother preaches in tongues to the Rubbermaid plant that employs half his hometown, Bageant uncovers harsh lessons about how liberals failed the people who do society’s grunt work, as well as fight our wars, and wind up with nothing to show for it but a broken-down trailer in foreclosure. They’re bitter as hell, but they “vote Republican because no liberal voice…that speaks the rock-bottom, undeniable truth, ever enters their lives… So, now, most liberals have come to view working whites as angry, warmongering bigots, happy pawns of the American empire — which begs the question of how they came to be that way, if they truly are.”

Joe described what was then happening as a surreptitious “class war”, and much of his writing resonates with Isabel Wilkerson’s recent book Caste.

What we really want to believe is that we’re in control of our own destiny. For revolutionaries and everyday folks everywhere, freedom is about the ability to do what you choose (within reason) and still live a good life. Lack of that ability is tantamount to slavery.

And now, despite the ubiquitous denials and refrains of the American Dream, no one is in control of their own destiny. We are all hapless dependents on systems that we have little or no say about, even the elite castes. While that is of course hardest on the lowest castes, it’s rankling to everyone — no one wants to be dependent on others, especially those they can’t control or even influence, and don’t know or trust, all their lives. Humans were never meant to live this way.

Atul Gawande, documenting the soaring rates of disease and death among what Joe called the permanent white underclass, argues that they are effectively dying of despair. While their lives and jobs are often difficult and precarious, their diets poor, and their understandable predilection for dangerous drugs and other escapes plays a factor, what he says is most remarkable is the gap between their expectations and the reality of their lives, current and projected.

Perhaps, then, what is mostly behind the distrust, anger and fear of most societies’ lower castes today, is their disappointment at the (perhaps well-intentioned) lies they were told about how their lives could be so much better if they gave up a bit of their personal freedom, in order to do what society bids them do.

What happens when this disappointment, anger, fear and despair becomes chronic? Anthropologists tell us people just walk away, from societies that no longer meet their needs, and those civilizations then collapse. That is of course immensely difficult when our civilization has done its best to keep everyone obedient, dependent, hopeful, and in thrall.

But there’s a tipping point, and I think it’s already been passed, and what I believe we’re seeing now are the growing signs of collapse. This rapacious, destructive, monstrously unequal culture has ceased to meet the needs of the vast majority of earth’s humans. The lies that, with work, patience and ingenuity, they one day might those needs, are increasingly ringing hollow.

We are watching the end of a civilization dying of despair. Rebellions against masks and vaccines, protests against racism, caste-ism and inequality, and the growing fragmentation and alienation of progressives and greens as their idealistic hopes are repeatedly dashed, are all just symptoms. The flywheel is coming apart. We can feel it with the calcium in our bones.

7 Responses to Live Free or Die