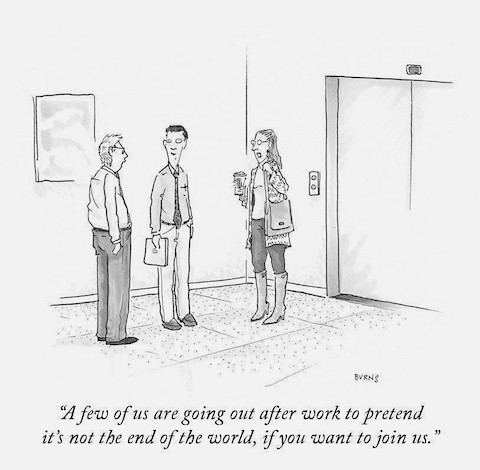 cartoon by Teresa Burns Parkhurst in the New Yorker

One of the things I’ve found amusing in the debates about whether humans have free will or not, is the strange position of some very popular but seemingly not very bright people like Sam Harris, who say, in essence, that it’s probably correct that we have no free will, but we can’t let the great unwashed know that’s true, because they’d go crazy and blow up the world or kill themselves. The logical flaws in this argument are massive enough to drive a truck through, but never mind. So, if we can’t tell the truth, what do we do instead? Apparently we hold entertaining podcasts and get on with our lives as if it were untrue.

A similar strategy of deliberately encouraging obliviousness seems to be pervading some of the discourse on climate/ecological/economic/civilizational collapse. We’re fucked; it’s too late to prevent collapse, the argument goes, but we don’t dare let this become popular knowledge. Perhaps this employs the same bizarre logic as the admonition about free will. A little knowledge is a dangerous thing, so don’t tell anyone the truth. Xraymike discusses this a bit in his newest blog post.

Suppose you are an astrophysicist, and you suddenly discover that within 24 hours earth is going to be fried to a crisp by a massive field of cosmic radiation caused by a nearby star going nova, with all life on the planet eviscerated? What do you do? Do you bother telling anyone? What would be the point? 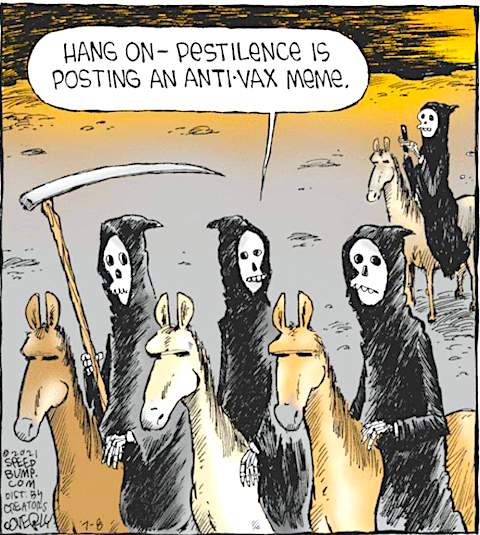 cartoon by Dave Coverly; thanks to John Kellden for the link

The everything death spiral: Tim Watkins explains how when it costs more to produce goods than consumers are able to pay (ie the supply and demand curves no longer intersect) you get a death spiral: New goods, especially at mass-production, low-price levels, are simply no longer produced, because there’s no money in it. Shelves empty, and scarcities become commonplace. Energy costs lie at the heart of this problem.

The oil we eat: Tim also looks at the myth of renewable energy (despite the boom in renewable energy sources, its total capacity is less than just the annual increase in energy demand). He concludes that we simply cannot feed, let alone supply other essentials to, 7.8B people without a continuing increase in petrochemical production every year, at a time when actual production is declining, and at a time when we need to immediately halt all new production to even begin to try to stem runaway climate change.

cartoon in the New Yorker by the late Charles Barsotti

The scientific consensus on a healthy diet: The leading risk factor for death in the United States is the American diet. This is not rocket science, folks. More details, if you’re interested, here, with a full transcript for those who’d rather read than watch. And WaPo reports that the health and climate cost of the poor American diet served up by Big Ag is three times the (heavily subsidized) cost of the food.

Rushkoff on the consumer as product: Interesting interview with Douglas Rushkoff, including this remarkably non-dual remark: “In America, people are willing to sacrifice their well-being, social cohesion, stability and sustainability for the false notion of individual freedom. But the truth is, there is no individual. There’s no such thing. It’s an utter fiction. It was created in order to promote more consumption. The more people spend time with one another, the less stuff they buy. A deep connection to other humans makes you an enemy of the marketplace.” Thanks to PS Pirro for the link.

Coping with loss: A lovely essay by Kenn Orphan on the grief that accompanies the loss of a loved one. Thanks to David Petraitis for the link.

Michael Pollan is taking drugs again: A review of Michael’s second book on the effect of hallucinogens and other “natural medicines”. Excerpt from the book here.

The stargate becomes real: There are now HD video “portals” showing real-time images and sounds from another country, so you can stand in front of the portal and speak to someone on the other “side” thousands of miles away as if they were right there. It’s just Zoom on steroids, but its effect, and its serendipity, are amazing. Thanks to Tree Bressen for the link. 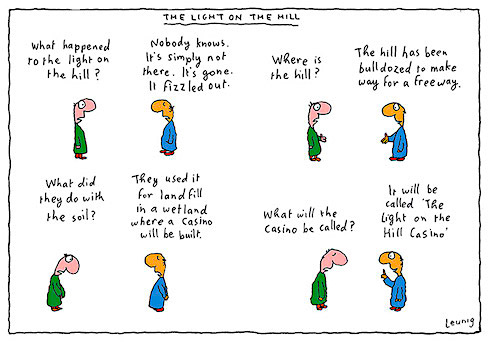 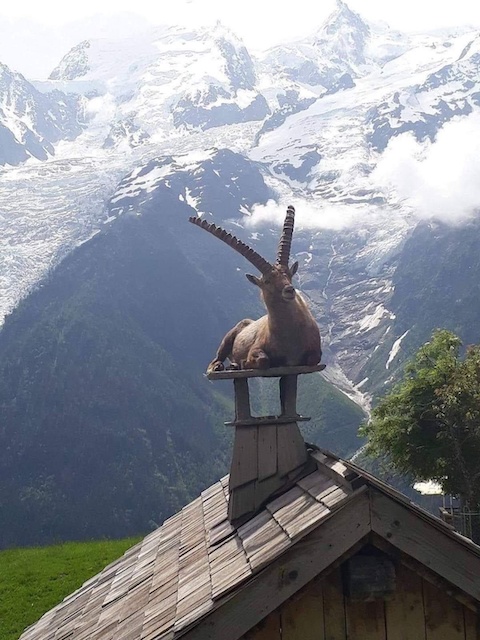 “Whatever you did to the antenna, dear, the signal’s much better now.” from the Earth Facebook group

When is an E not an E?: Adam Neely’s latest fascinating music theory Q&A reveals the strange fact that, if you play the note “E” on a keyboard, 440 times a second, what you hear is an “A”, and why that’s so.

The Hockey Sister: A stunning, and disturbing, personal memoir by Sarah Miller in the New Yorker about growing up in the shadow of your sibling.

You are not a “visual learner”: Veritasium debunks the entrenched myth that different people have different optimal learning styles.

Birds of a feather: Watch Peter Cavanagh’s stunning slow-motion video of a huge flock of birds taking flight. Thanks to Bob Lambert for the link. 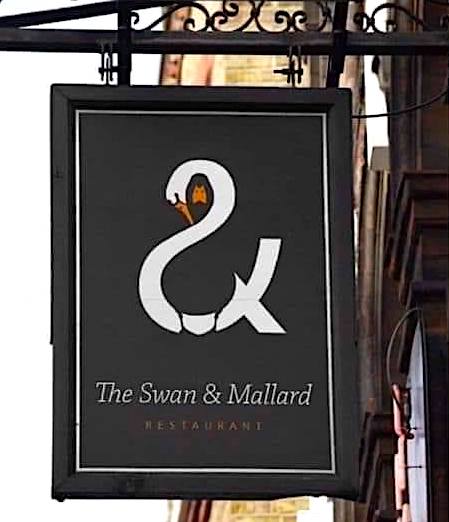 Extraordinary design by John Randall; it seems the restaurant never opened. Do you see the mallard? thanks to Natasha Chart for the link

From Caitlin Moran, in More Than a Woman (thanks to PS Pirro for the link):

When I think about the most wearying thing about becoming middle-aged, it’s that you are the only one who can fix things – there is no one you can complain to, or seek comfort from; for you are the grown-ups, now, and if you can’t fix it, it will remain broken.

From Caitlin Johnstone, on the US leaving Afghanistan:

Warmongers are saying, “If we leave Afghanistan and it returns to Taliban control it will be like the whole war achieved nothing!” Uh, yeah. Yeah it will be lots like that. How about that, huh?

A joke by J Russom (thanks to Tim Cliss for the link):

Juan comes up to the Mexican border on his bicycle. He has two large bags over his shoulders. The guard stops him and says, “What’s in the bags?”

The guard says, “We’ll just see about that. Get off the bike.” The guard takes the bags and rips them apart; he empties them out and finds nothing in them but sand. He detains Juan overnight and has the sand analyzed, only to discover that there is nothing but pure sand in the bags The guard releases Juan, puts the sand into new bags, hefts them onto the man’s shoulders, and lets him cross the border.

A week later, the same thing happens. The guard asks, “What have you got?”

The guard does his thorough examination and discovers that the bags contain nothing but sand. He gives the sand back to Juan, and Juan crosses the border on his bicycle.

This sequence of events if repeated every day for three years. Finally, Juan doesn’t show up one day and the guard runs into him in a cantina in Mexico.

“Hey, Buddy,” says the guard, “I know you are smuggling something. It’s driving me crazy. It’s all I think about….. I can’t sleep. Just between you and me, what are you smuggling?”

And four lovely quotes from John Green’s The Anthropocene Reviewed:

These days, when my kids whisper to me, it is usually to share a worry they find embarrassing or frightening. It takes courage even to whisper those fears, and I am so grateful when they trust me with them, even if I don’t quite know how to answer. I want to say “You don’t have any cause for concern”, but they do have cause for concern. I want to say “There’s nothing to be scared about”, but there’s plenty to be scared about. When I was a kid I thought being a parent meant knowing what to say and how to say it. But I have no idea what to say or how to say it. All I can do is shut up and listen. Otherwise, you miss all the good stuff.

There are so many viruses on earth that if you laid them end to end, they would stretch 100 million light years — 500 galaxies wide. Bacteriophages, viruses that parasitize bacteria, cause a trillion, trillion infections per second, destroying half the world’s bacteria every 48 hours. And despite that devastation, bacteria outweigh all animals combined on the planet by a factor of 40.

From Clint Smith “When people say ‘we have made it through worse before’, all I hear is the wind slapping against the gravestones of those who did not make it.”

As a kid on the early internet, I loved typing because no one could know how small and thin my hands were, how scared I was all the time, how I struggled to talk out loud. Online, back in 1991, I wasn’t made of anxious flesh and brittle bone; I was made out of keystrokes. When I could no longer bear to be myself, I was able to become for a while a series of keys struck in quick succession.