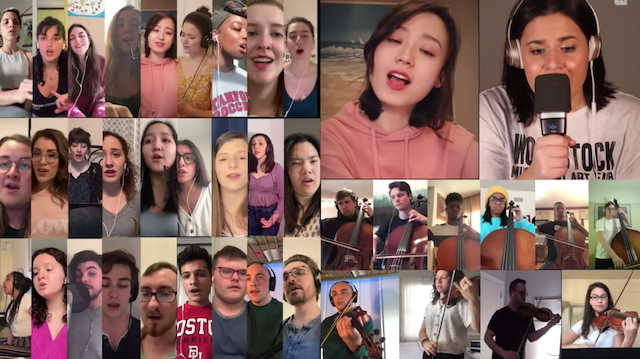 Despite its serious and unresolved failings, YouTube has created an amazing and mostly-free platform for musicians of every stripe to share their recordings with the world, and to be discovered without the need to pander to the decrepit music publishing ‘industry’.

It’s also enabled the development of some amazing products that have resulted from the fusion of music, audio and video technology. As a result, over the last ten years, we have seen the capacity for virtual music collaborations explode. It is no longer necessary for musicians to compose or record in the same space, or even to meet face to face at all. We have seen mashups and remixes that are infinitely better than the originals they have copied from (plagiarized, or built upon, depending on your point of view). We have seen the capacity to alter a musical track’s pitch without affecting its timing, and vice versa, a boon to DJs and mix artists.

These advances have become especially useful during the current pandemic. The technology that enables musicians to send master tracks to performers electronically and then perfectly sync the audio and video tracks of dozens, and even hundreds and thousands, of performers, has enabled the creation of music that simply could never be produced in any real-world production space. It’s extremely challenging: syncing the volumes, tones, pitches and timing of many disparate tracks, dealing with ambient and background noise, and also patching together a sync of all of the performers’ videos, requires incredible skill and patience. But it can be done.

The results can be breath-taking, heart-wrenching, eye-opening, or tremendous fun. Most importantly, they open the door to new possibilities in music creation: You can create virtual choirs, orchestras and bands from members performing in different spaces and at different times, including performers who don’t, and don’t have to, even know each other. You can seemingly make deceased performers perform with live ones. You can enrich music in ways that a decade ago couldn’t even be imagined.

Just as CGI is making it possible to have virtual actors, and to create human and other creatures out of nothing and show them on the screen, new music technologies make it possible to ‘create’ singers, players, and entirely new instruments in the studio, without the need for the ‘real’ thing.

Here are some of the most extraordinary recent ‘virtual’ music performances I’ve seen, all produced in the past month, that show just how far we’ve come:

1. What the World Needs Now — cover, by the Boston Conservatory and Berklee College Virtual Orchestra (pictured above)

3. Griffenfelt, a ‘virtual’ performance by the Folk All-In Band from Sweden

5. Toss the Bach — a Celtic/Classical Mashup, by the Touch of Class Virtual Band from Neenah (Wisconsin) High School

Awesome stuff. Music is especially important in challenging times like these, and performances like these show what’s possible, and how our hearts and souls can be moved by the collaborative efforts of many artists, even if they can’t meet, and meet with us, in person.