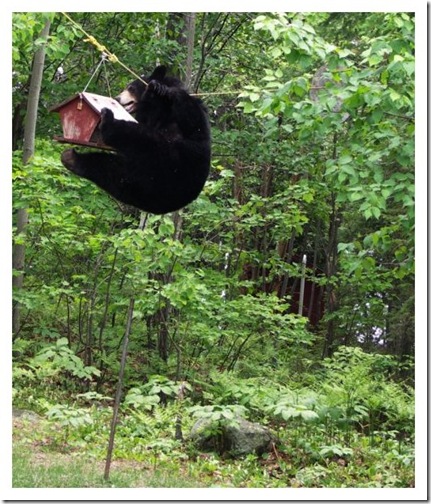 Photo from a friend of Beth Patterson: Young bear swings his way over to suet pouch on a bird feeder.

So many great articles this week they wouldn’t all fit into Saturday’s post. Here’s the rest.

Living a Simpler Life: In another piercing essay, Joe Bageant warns us not to expect too much from Obama, and to take responsibility now to live simpler, consume less, end the occupations in the Mideast, stop accepting the lies from the politicians, corporations and media, learn how bad life is for most of the people in this world, become an agent for real change, and prepare for a grim century that will require a lot of sacrifices, struggle and compensation for the excesses of the past few decades. Vintage Joe, but with a weary eye on the future.

Do Writers Seek and Need Recognition?: Chris Lott reviews some recent articles about writing in the age of the Internet, where the attention is spread thinner and thinner among more and more writers, and adds his own two cents.

Singing in a Time of Darkness: Cassandra ruminates on seasonal affective disorder, this cold, stormy and early (in Canada, anyway) winter, and then points us to her choir’s weekly (Sunday 5pm) Internet broadcast. Music to warm your body and soul.

Google Docs as Simple Effective Real-Time Collaborative Software: Viv McWaters points us to a promo video for Google Docs that explains why this simple free application is catching on faster than all the expensive, over-engineered collaboration tools out there.

Thought for the Week: A poem by new US poet laureate Kay Ryan. Thanks to Sharon for the link.

Who would be a turtle who could help it?
A barely mobile hard roll, a four-oared helmet,
She can ill afford the chances she must take
In rowing toward the grasses that she eats.
Her track is graceless, like dragging
A packing-case places, and almost any slope
Defeats her modest hopes. Even being practical,
She’s often stuck up to the axle on her way
To something edible. With everything optimal,
She skirts the ditch which would convert
Her shell into a serving dish. She lives
Below luck-level, never imagining some lottery
Will change her load of pottery to wings.
Her only levity is patience,
The sport of truly chastened things.