Words and Pictures (and Music)

Now that my amazing new home is basically furnished and functional, I’m getting down to my reconnection practices. I’ve been exploring the rainforest next door, resuming my regular 5k runs, and beginning my meditation and presencing practices, both outdoors in ‘my’ park with the brooding stone circle, and indoors, where I have a view from my living room of the town of Gibsons and the mountains of the Sunshine Coast across Howe Sound (astonishing at night), and of the mountains of Cypress Provincial Park across Queen Charlotte Channel out the adjacent window.

In the process, I’ve been focusing more on poetry than on non-fiction writing, and on the images, smells, and sounds that I found so inviting when I discovered this place. So I thought I’d share some of these words, pictures and sounds with you: 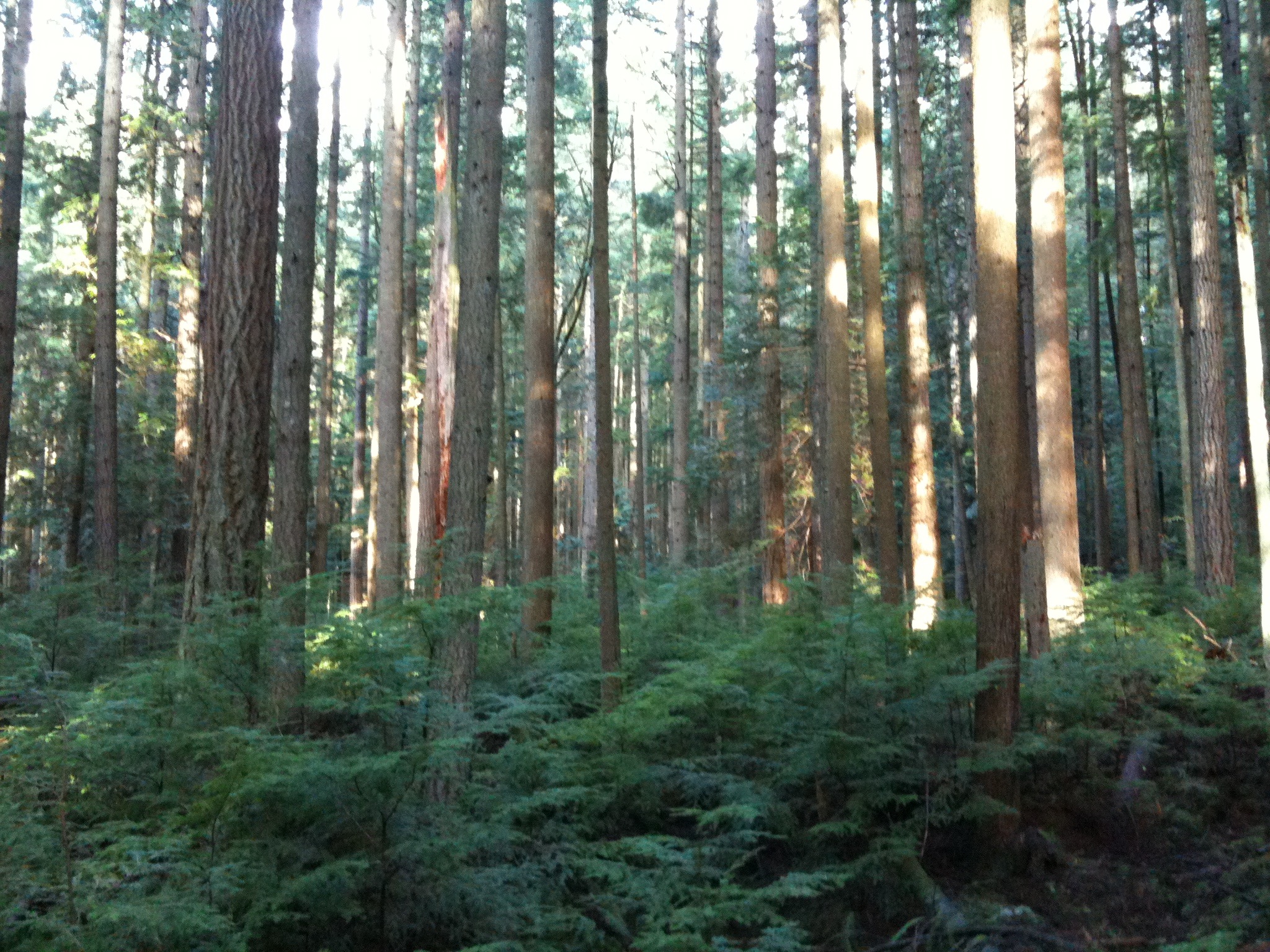 part of the rainforest beside my new home on Bowen Island

The Cat’s Song (by Marge Piercy)

Mine, says the cat, putting out his paw of darkness.
My lover, my friend, my slave, my toy, says
the cat making on your chest his gesture of drawing
milk from his mother’s forgotten breasts.

Let us walk in the woods, says the cat.
I’ll teach you to read the tabloid of scents,
to fade into shadow, wait like a trap, to hunt.
Now I lay this plump warm mouse on your mat.

You feed me, I try to feed you, we are friends,
says the cat, although I am more equal than you.
Can you leap twenty times the height of your body?
Can you run up and down trees? Jump between roofs?

Let us rub our bodies together and talk of touch.
My emotions are pure as salt crystals and as hard.
My lusts glow like my eyes. I sing to you in the mornings
walking round and round your bed and into your face.

Come I will teach you to dance as naturally
as falling asleep and waking and stretching long, long.
I speak greed with my paws and fear with my whiskers.

Envy lashes my tail. Love speaks me entire, a word
of fur. I will teach you to be still as an egg
and to slip like the ghost of wind through the grass. 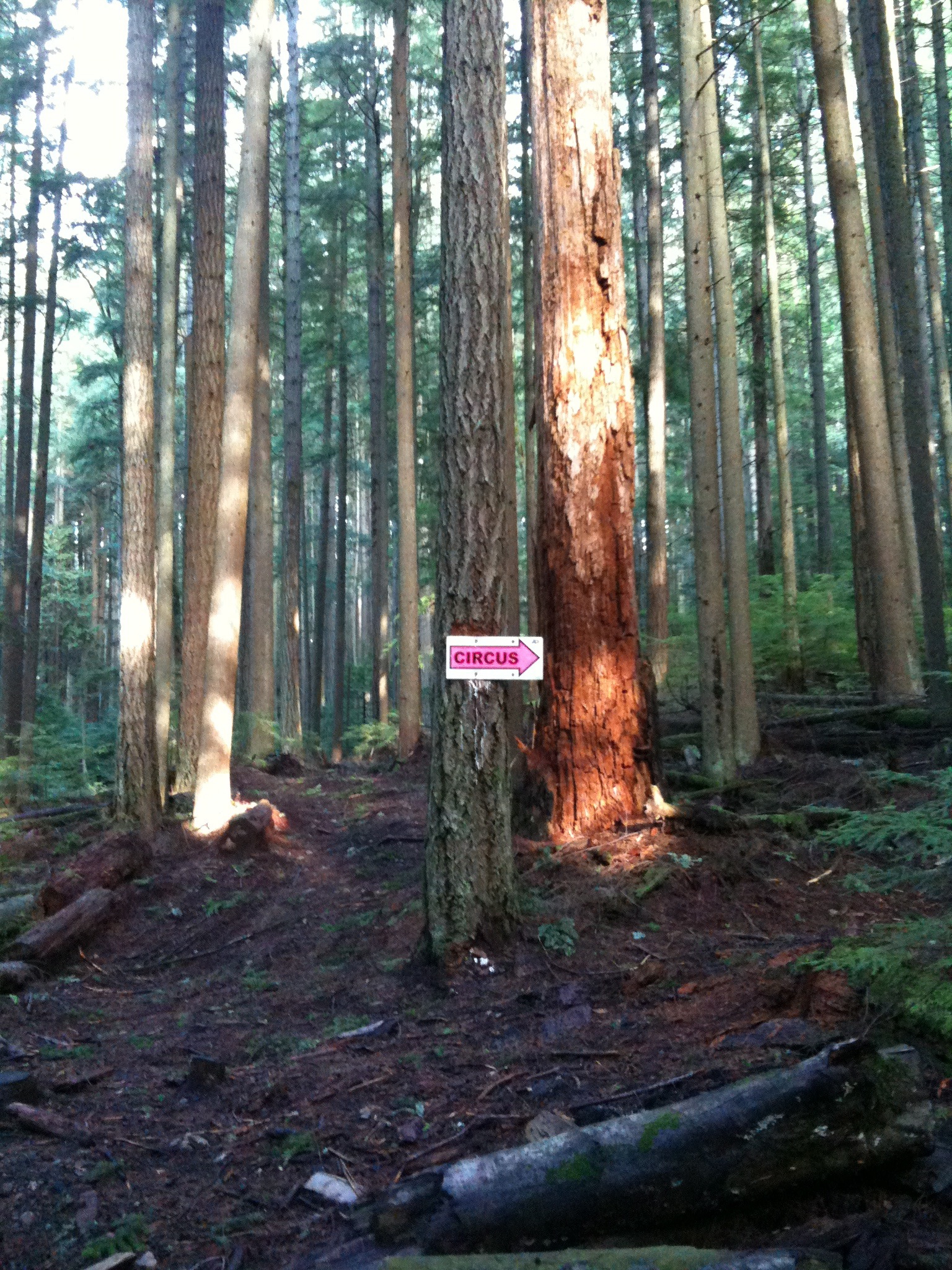 a sign we discovered in the middle of the forest on Bowen Island; it points in the approximate direction of the upcoming Winter Olympics

Flaubert wanted to write a novel
About nothing. It was to have no subject
And be sustained upon the style alone,
Like the Holy Ghost cruising above
The abyss, or like the little animals
In Disney cartoons who stand upon a branch
That breaks, but do not fall
Till they look down. He never wrote that novel,
And neither did he write another one
That would have been called La Spirale,
Wherein the hero’s fortunes were to rise
In dreams, while his walking life disintegrated.

Even so, for these two books
We thank the master. They can be read,
With difficulty, in the spirit alone,
Are not so wholly lost as certain works
Burned at Alexandria, flooded at Florence,
And are never taught at universities.
Moreover, they are not deformed by style,
That fire that eats what it illuminates. The Principles of Concealment (by David Wagoner)

If you’re caught in the open
In an exposed position, alone,
Disarmed, and certain you may be
Attacked at any moment, you should settle quickly
All your differences with whatever lies
Around you, forcing yourself to agree
With rocks and bushes, trees and wild grass,
Horses, cows, or sheep, even debris
To find what you have in common. You no longer
Want to seem what you are, but something
Harmless and familiar: in a landscape
Given to greenness and the cold pastels
Of stubble and field stone,
Protective coloration may be too much
To hope for, beyond your powers
Like the beatitudes of browsing
And those conspicuously alarming colors
That declare you’re poisonous
Or taste terrible—all may be doomed
To fail with an enemy equipped to kill
From a distance. Your shape betrays you,
And you should try to break it
With disruptive patterns: if an enemy sees you,
Not as a whole, but as a head distinct
From a torso, as legs or arms
By themselves—he may ignore you
And let you have your moment
In the sun as an abstraction gone
To pieces, as a surface mottled and dappled
Ambiguously by intercepted light
Like a man cancelled. But all these efforts
Will come to nothing if you move: one gesture
May catch all eyes. If you stand
Still then, or stay seated
If you’re sitting down, or go on lying
Down if you’re lying, an easy solution
May occur to you, cheek to cheek
With the hard facts of inorganic life:
That you have no enemy,
That no one is hunting you,
That all your precautions were a waste
Of attention better given to more rewarding
Evasions and pursuits. If so,
And you take your place again
As a distinct departure
From your foreground and background,
You should know it’s possible
For you to feel, after all,
At the first step, at the first crack
Out of the box, that lethal impact,
That private personal blow marking your loss
Of the light of day, the companionship
Of the night, and the creature comforts of home
As you become a member
Of that other civilization spreading itself
Around you, ready and able and still
Called the natural world.

For the young who want to (by Marge Piercy)

Talent is what they say
you have after the novel
is published and favorably
reviewed. Beforehand what
you have is a tedious
delusion, a hobby like knitting.

Work is what you have done
after the play is produced
and the audience claps.
Before that friends keep asking
when you are planning to go
out and get a job.

Genius is what they know you
had after the third volume
of remarkable poems. Earlier
they accuse you of withdrawing,
ask why you don’t have a baby,
call you a bum.

The reason people want M.F.A.’s,
take workshops with fancy names
when all you can really
learn is a few techniques,
typing instructions and some-
body else’s mannerisms

is that every artist lacks
a license to hang on the wall
like your optician, your vet
proving you may be a clumsy sadist
whose fillings fall into the stew
but you’re certified a dentist.

The real writer is one
who really writes. Talent
is an invention like phlogiston
after the fact of fire.
Work is its own cure. You have to
like it better than being loved. 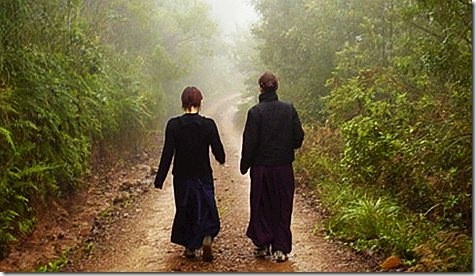 Learning by Doing by Howard Nemerov

They’re taking down a tree at the front door,
The power saw is snarling at some nerves,
Whining at others. Now and then it grunts,
And sawdust falls like snow or a drift of seeds.
Rotten, they tell us, at the fork, and one
Big wind would bring it down. So what they do
They do, as usual, to do us good.
Whatever cannot carry its own weight
Has got to go, and so on; you expect
To hear them talking next about survival
And the values of a free society.
For in the explanations people give
On these occasions there is generally some
Mean-spirited moral point, and everyone
Privately wonders if his neighbors plan
To saw him up before he falls on them.

Maybe a hundred years in sun and shower
Dismantled in a morning and let down
Out of itself a finger at a time
And then an arm, and so down to the trunk,
Until there’s nothing left to hold on to
Or snub the splintery holding rope around,
And where those big green divagations were
So loftily with shadows interleaved
The absent-minded blue rains in on us.
Now that they’ve got it sectioned on the ground

It looks as though somebody made a plain
Error in diagnosis, for the wood
Looks sweet and sound throughout. You couldn’t know,
Of course, until you took it down. That’s what
Experts are for, and these experts stand round
The giant pieces of tree as though expecting
An instruction booklet from the factory
Before they try to put it back together.

Anyhow, there it isn’t, on the ground.
Next come the tractor and the crowbar crew
To extirpate what’s left and fill the grave.
Maybe tomorrow grass seed will be sown.
There’s some mean-spirited moral point in that
As well: you learn to bury your mistakes,
Though for a while at dusk the darkening air
Will be with many shadows interleaved,
And pierced with a bewilderment of birds.

Postscript: For those who have worried that, living in this place of astonishing peace and beauty, I will lose touch with what is going on in the real world, and all the work that needs to be done, my post tomorrow will describe what I intend to do, from my quiet place, to make a real difference, and to help others coalesce in ways that will bring the brightest progressive minds to bear on ways in which we can undermine and end the industrial economy and the brittle, cruel and devastating industrial society that holds the world in thrall.

1 Response to Words and Pictures (and Music)