The Death of Imagination 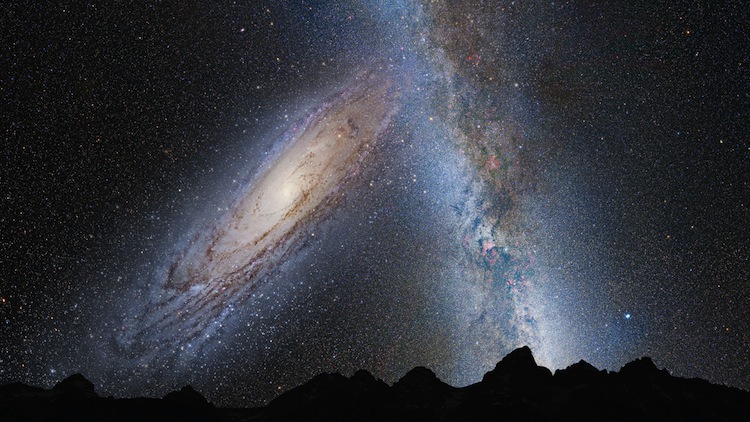 Imagination is the capacity to conjure up ideas, stories, prose, poetry, music, images, and ways to deal with problems and predicaments, seemingly out of nothing. It is the ability to be open to possibility, to let something emerge within you, and give it voice.

Creativity, by contrast, is a crafter’s art. It is the capacity to realize, to make real, either your own imaginative possibilities or those described or specified by others. It is a different skill entirely, and while some people are both imaginative and creative, there are many more creative people today, I think, than imaginative ones.

Why should this be so? Why is the world, challenged as it is by a host of intractable problems and emerging crises that have led us to the brink of civilizational collapse and ushered in the sixth great extinction of life on Earth, suffering from unprecedented imaginative poverty at exactly the time we most need imagination?

A good imagination requires a combination of (a) innate qualities (sensitivity, lateral thinking capacity, openness to “let things come”, and the mental agility to integrate, suspend judgement, synthesize and, for want of a better word, dream), and (b) capacities learned from practice (composition, editing, articulation, reflection, perseverance, critical thinking, attention and play). The former (the innate qualities) have often been discouraged and disparaged as flakiness or weirdness; artists have almost always been under-appreciated. But the capacities that come from imaginative practice have, I think, only recently become rare. I’d argue that this is in part because we don’t really value practice of anything anymore (it’s too much work, takes too much time and in our modern world nothing is expected to last anyway). It’s also, I think, because so many of our modern recreations (hackneyed mainstream films, formulaic popular fiction and TV, insipid popular music and derivative video games) require no imagination at all, either to produce or to participate in. So we get little practice imagining. Almost nothing is left to the imagination anymore.

The most important effect of the dearth of imagination is in our processes. Process is “the way we do something”. For millennia, the processes we used were principally those handed down by parents or mentors from generation to generation, tweaked by each generation’s new sensibilities, tastes and popular passions. With the introduction of industrial culture, this way was largely replaced by more ‘efficient’ standard processes, documented in manuals, enforced with forms, close supervision and mandatory sign-offs and, as much as possible, automated.

Process is now largely imposed on us, in one or more of three ways:

Many new technologies have useless manuals that are ignored because they merely restate the constraints imposed by the technology’s menus and buttons. No one can be blamed for not RTFM.

Every technology is inherently limiting. Manual, low-tech tools and media like pens, paints, knives, wood, and musical instruments can be used in nearly unlimited ways, constrained mostly by our imaginations (or lack thereof). Software constrains you to what the program has envisioned as possible and useful and hence designed to allow.

This has had its greatest impact in the industrial and office workplace. As many business writers have noted, the most important phenomenon in 21st century businesses of any size is that most workers know how to do their increasingly specialized jobs better than their bosses (many of whom have only one abstract and, in practical terms, largely useless and hugely overrated ‘skill’ called “management”). What that means is that executives have to largely trust employees to know how to do their jobs well (which is why increasingly they hire expensive experienced older employees rather than train young people to do any advanced, important jobs).

The young and menial workers are constrained by technology (telemarketing scripts, software ‘aids’ and embedded error detection and correction tools) to ensure their lack of useful skills and experience doesn’t cause any serious problems for the corporation, and to weed out any variation in processes. These are all, of course, jobs awaiting improvements in technology that will enable them to be either automated or offshored.

Survivors in the business world quickly learn that the way business works, at its best, is through workarounds. Workarounds are modifications to the prescribed, official, imposed processes that allow the worker to actually do what’s best for customers, co-workers and community, despite training, manuals and technologies that force them to follow processes designed to do what’s best for shareholders and executives of the corporation. That may sound terribly cynical, but in 37 years in business I never discovered a large corporation that worked otherwise, and many of my co-workers have acknowledged that workarounds are, in fact, how all the really important work in organizations gets done (almost none of it by executives). The key is to appear to be following standard process while actually deviating from it. This requires a great deal of imagination and no little tact, which is why most imaginative people in large corporations burn out and leave, leaving the corporations in the hands of the arrogant and the clueless. These corporations survive without imagination because through oligopoly (which is no longer regulated in this ever-more-corporatist society) they have the financial and political might to buy up, threaten, shut down and shut out imaginative upstarts, and flood the airwaves with advertising propaganda that persuades unimaginative, dumbed-down consumers that they are actually offering value (or at least amusement) for their products’ hugely inflated prices.

So we can’t expect imagination from the corporations that dominate our economy, or from the media or political decision-makers.

So if we want to create an environment that enables and encourages more imagination, before our industrial civilization dies, in part, for lack of it, where do we start? 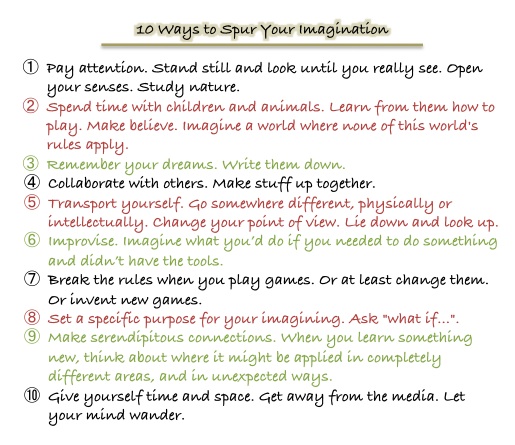 from one of my early articles on imagination

I’d like to believe we could start in the classrooms, but my experience has led me to believe that the mainstream education systems, both public and private, are really just another flavour of large corporation, where well-meaning teachers follow standard processes set down by corporatist administrators and only occasionally sneak in workarounds that actually allow students to learn or do anything of value.

So instead of speaking of institutions of education, let’s start instead with the processes of facilitating and mentoring young people’s learning processes, whether through unschooling (not homeschooling) or other methods of avoiding the dysfunction of large educational institutions. How could we make these processes, and the environments in which they occur, more enabling and encouraging of imagination?

For a start, we could (through exercises and examples and by demonstration) show young people how to imagine, and then how to create (i.e. to make that product of the imagination real), and then let them practice at it through play, encouraging just the practice, not the end-product. That means, for example, helping them learn how to make music without needing to rely on ‘samples’ of others’ music and canned instrumentation. That means helping them learn to write stories and poetry that is not fan fiction, but wholly original — by mentoring them to recognize what is original and what is derivative: a critical analysis of their own work. That means encouraging them to play their own compositions, not ‘covers’ of others’. That means helping them to design games that are not automated, which players can adapt and evolve easily without ‘rewriting’ them to be more fun, and more creative, which don’t require computers or complicated tools, and which don’t have prescribed ‘roles’ or invariable rules. Games that make play a creative process rather than a reflexive, constrained one, and whose object is having fun and learning, not ‘winning’.

We could facilitate and mentor them to discover how to learn for themselves, and then how to make all learning play, adventure —joyful. And to apply that capacity and their imaginations to discover what they really love doing, and what they’re really good at doing (probably things that aren’t on any list of ‘job skills’ and hence things they’re going to have to discover for themselves, using their own imaginative processes). And then to imagine what the world really needs that no one else is providing, and how, uniquely, they could bring it to the world, and in so doing, realize what they’re meant to do to make a living. No form or checklist or vocational program is going to teach them that. It’s the most important thing they’ll ever have to imagine.

We could, as well, point them to really outstanding imaginative and creative work, and not force it on them, but just invite them, in their own time, to discover it, to learn from it. It’s hard to find: I spend a lot of time in bookstores and online searching for good short stories, well-crafted written work in all genres, and needle-in-a-haystack excellent poetry (and no, I don’t think my own creative work yet measures up to those standards; I’m not practiced enough either). I’m dismayed at how many writers (of all ages) read next to nothing of others’ work, and how many musicians appreciate only one genre of music and find really well-composed work too complicated to appreciate. Like anything else, the practice of imagination involves studying those who’ve become really good at it, and understanding why and how.

This will not be easy. Most of us who live or work with young people are too busy and too exhausted to devote time to the frivolous practice of helping them to imagine. Spending time with young people is, alas, not highly valued in our culture.

And I think it’s too late to recover the imaginative capacity of most people who have reached adulthood. Just as it becomes almost impossible to learn a language if you’re not exposed to it in childhood, when your neural pathways are forming and reforming, I think it’s likely that the lack of any imaginative practice in youth has stunted most adults’ capacity to ever really become good at imagining. Unfortunately, they’ve (we’ve) been brought up to be good at just one thing: consuming, conspicuously, uncritically and insatiably.

So that’s why I speak of the death of imagination. When our culture collapses, and we run out of cheap energy and cheap money and cheap labour to provide and operate our mind-numbing technologies, the survivors will have to learn, again, to imagine. They will discover it isn’t hard, or expensive, and that it’s fun, and that with practice they can get very good at it. It’s part of who, underneath the pall of our declining culture, we are.

A Postscript on Innovation: You may wonder why I’ve not used the word innovation in this essay, a word beloved by business ‘leaders’. It’s because it’s become a weasel word that, for many, means derivative, incremental, style-over-substance design created in a laboratory by people disconnected from real users with real needs. Real innovation is a dance of three things: imagination, creativity and critical thinking. It is an iterative process entailing a collaborative revealing of what is needed and what is possible. It is a process that often asks “what if…?” and “how might we…?” and “why doesn’t it already exist?” questions. Both asking and answering these questions requires a lot of imagination, a lot of learning and probing and challenging and suspending judgement and further questioning. It’s the antithesis of the design process as it is normally done in most businesses. Most businesses don’t have the talent in their whole organizations to do it well, and many that do don’t recognize that talent until it’s gone. That’s why there is almost no real innovation in the business world today. And why I gave up writing about it on this blog quite a few years ago.

10 Responses to The Death of Imagination