Requiem for a Species

I‘ve added professor Clive Hamilton’s new book Requiem for a Species: Why We Resist the Truth About Climate Change to my “Save the World Reading List” (retroactively). It’s the natural next step after the 15 essential readings and really sums up where we (our species and our planet) are now.

Clive starts out by saying what climate scientists know but are afraid to say:

Over the last five years, almost every advance in climate science has painted a more disturbing picture of the future. The reluctant conclusion of the most eminent climate scientists is that the world is now on the path to a very unpleasant future and it is too late to stop it. Behind the facade of scientific detachment, the climate scientists themselves now evince a mood of barely suppressed panic. No one is willing to say publicly what the climate science is telling us: that we can no longer prevent global warming that will this century bring about a radically transformed world that is much more hostile to the survival and flourishing of life. This is no longer an expectation of what might happen if we do not act soon; this will happen, even if the most optimistic assessment of how the world might respond to the climate disruption is validated.

In the first four chapters, he reviews the science of climate change (including the methane release and other positive feedback loops that auto-accelerate greenhouse gases), explains why we have passed the tipping point, why we (and our politicians) want growth to continue forever, how our consumerist culture has evolved, why we’re prone to believe greenwashing, the psychology of denial, and the inevitability of the emergence of dangerous, corporatist-funded “junk science”.

Chapter 5 describes the civilized human’s disconnection from nature that has allowed all of this to happen. Clive explains the malleability of our mental constructs of reality, self, and belonging and how they (we) have changed our worldview. (The chapter includes a fascinating and succinct statement of the Gaia Hypothesis written by Plato in the 4th century BCE!)

In Chapter 6, he deconstructs the discredited ‘fixes’ to global warming: carbon capture, the switch to renewables, substituting nuclear energy, and the use of climate engineering (geoengineering). I think he underestimates the perils of nuclear energy (not only the massive cost of reactors and how they would bankrupt our already-overstretched economy, but the challenge to post-civilization societies of preventing, for the next million years, the last century’s human-made radioactive wastes from causing even greater devastation for millennia to come). But otherwise this examination of proposed fixes is a good update to George Monbiot’s Heat. Chapter 6 includes an interesting and terrifying review of the politics of geoengineering, focused on the deranged proposals of right-wing darlings Edward Teller and Lowell Wood, that leads to the horrific conclusion that, because it’s so inexpensive and tempting to desperate, arrogant people, unilateral geoengineering efforts are not only likely, but probably inevitable.

In Chapter 7, Clive explains what we can expect, based on the latest projections, when runaway climate change hits us full-bore over the next few decades:

He dismisses human plans for resilience and adaptation in the face of such catastrophic (and specifically unpredictable) events, and says instead we must prepare for “a process of continuous transformation” of the way we live — societies and cultures in a constants state of rapid flux. He confesses:

It was only in September 2008, after reading a number of new books, reports and scientific papers, that I finally allowed myself to make the shift and admit that we simply are not going to act with anything like the urgency required… The climate crisis for the human species is now an existential one. On one level I felt relief: relief at finally admitting what my rational brain had been telling me; relief at no longer having to spend energy on false hopes; and relief at being able to let go of some anger at the politicians, business executives and climate sceptics who are largely responsible for delaying action against global warming until it became too late…

We [now] have no chance of preventing emissions rising well above a number of critical tipping points that will spark uncontrollable climate change. The Earth’s climate [will now] enter a chaotic era lasting thousands of years before natural processes eventually establish some sort of equilibrium. Whether human beings [will] still be a force on the planet, or even survive, is a moot point. One thing seems certain: there will be far fewer of us.

The final chapter on “what to do” focuses largely on learning to accept and deal with grief and loss. Clive explains:

For those who confront the facts and emotional meaning of climate change, the [death we mourn] is the loss of the future. [Our grief] is often marked by shock and disbelief, followed by… anger, anxiety, longing, depression, and emptiness [which we suppress through] numbness, pretence that the loss has not occurred, aggression directed at those seen as responsible, and self-blame… [Denial and avoidance are] defences against the feelings of despair that the climate science rationally entails…

Healthy grieving requires a gradual ‘withdrawal of emotional investment in the hopes, dreams and expectations of the future’ on which our life has been constructed. [But] after detaching from the old future [it is our nature to] construct and attach to a new future. Yet we cannot build a new conception of the future until we allow the old one to die, and Joanna Macy reminds us that we need to have the courage to allow ourselves to [first] descend into hopelessness. 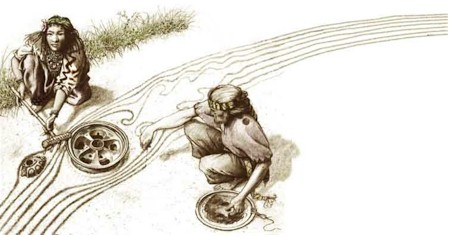 conception of art after the collapse of civilization culture by afterculture

This is the reason, I think, why I am now driven to write upbeat imaginative stories set several millennia in the future, once the crisis has passed. It is easier and perhaps healthier to see the coming collapse not as the end of something, but as a period of disequilibrium, a challenge, that we must endure in order that our descendants can live in a much better society than the one we live in today. It’s an attitude of willingness for self-sacrifice that many of our ancestors shared.

Clive goes on to explain how the loss of our future brings about a loss of meaning, and so we have to create a new story about ourselves and our purpose.

He suggests that we will reach the point at which, as much as we respect the law, we will have a moral obligation to ignore it, to mitigate or at least briefly delay the onset of runaway climate change through illegal actions. As I have written lately, I think that is a matter both of personal conscience and personal worldview: I have come to appreciate, through my study of complex systems, that such actions, useful as they may be in achieving short-term benefits for those we care about, will ultimately have no long-term effect, and they entail considerable personal risk as our surveillance society anticipates and ramps up efforts to suppress such actions ruthlessly. But I also appreciate and admire those willing to fight the system despite those personal risks and its ultimate futility.

I come back to the four safer actions we can take now to prepare, I think, for the convulsive period ahead:

11 Responses to Requiem for a Species