Links of the Quarter: September 2017 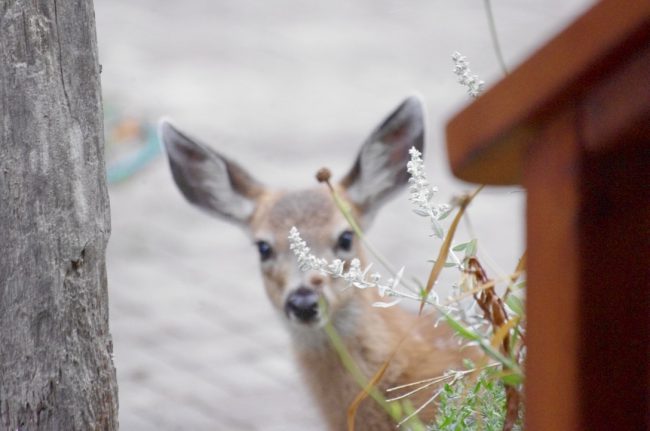 “There are more things in Heaven and Earth, Horatio, than are dreamt of in your philosophy.” So says Hamlet, poking gentle fun at the science (“philosophy”) of the day. A few centuries later an increasing number of scientists, and philosophers, seem inclined to agree. The more we learn, the more mystified and wondrous we become at the impossibility of really knowing how anything works, or even what really is.

Apparently, there is just what’s happening. 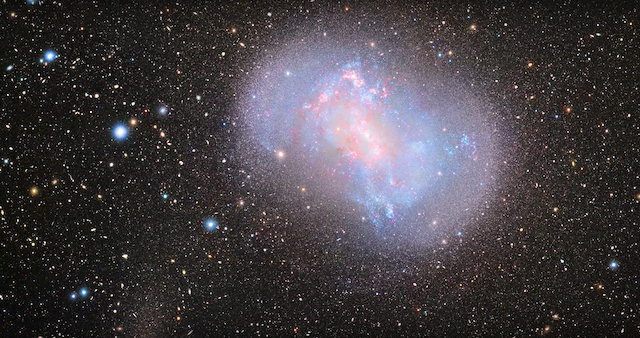 Hubble telescope photo of a rapidly evolving new galaxy, from NASA; public domain. Thanks to NASA for its work, and to the YouTube channel Astrum for the link.

If we think of our industrial civilization as a patient (though it might be fairer to describe our planet as the patient and civilization as the disease), the diagnosis that has been made on these pages and elsewhere for some years now is unchanged. The writers about collapse on my right sidebar can give you the daily scorecard (eg Gail is writing about the gap between the price of oil that producers need to get and the price that consumers can afford to pay, and about the myth of renewable energy being cheap to bring on at scale; Ilargi’s writing about the unaffordability of maintaining industrial civilization’s essential infrastructure). But in any case the patient has less than a century to live, and its declining years are not going to be healthy.

The patient, Industrial Civilization, has three essential organs without which it dies: a perpetually growing economy (its heart); stable, affordable energy (its blood); and a diverse environment with an extremely stable climate (its body). These are now all on life-support.

The economy increasingly looks like the first organ to fail. Real economic growth for all but the 1% has ceased, while the ever-swelling population adds relentlessly to the pressure for even more. Spending is now almost completely dependent on unsustainable ever-increasing borrowing, which depends on a willingness of those with money to lend, and on insanely low interest rates that only governments, idiots and the clueless would lend at.

For two centuries, almost 100% of economic growth has been the result of ever-increasing supply and use of cheap (relative to earning power) energy, which as Gail explains is now at an end. And as we’re seeing in more and more places (storm-damaged cities, inundated islands, drought-ravaged nations whose soil has turned to dust and natural resources exhausted), increasing climate instability means settlement in any one place for an extended period of time is becoming more and more foolhardy, and yet our whole civilization has been built on, and needs, settlement and stability. This ‘patient’ needs constant ‘transplants’, increasing in frequency.

So this is Industrial Civilization: A frail heart needing more and more blood in a body increasingly wracked with injuries and illnesses. And we’re all dependent on this ‘patient’ for our very survival. Betting our lives on this patient was a poor decision, but it seemed to make sense at the time. And for generations we’ve just doubled down on the bet, because it’s the only game we remember how to play. Sad, understandable, unavoidable, and fatal. Fatal for the patient, but not for the remnants of our foolish and arrogant species, or for the at least temporarily diminished diversity of life on our suffering plant. The play of life will go on, with other, hopefully more fortunate players. After us the dragons. 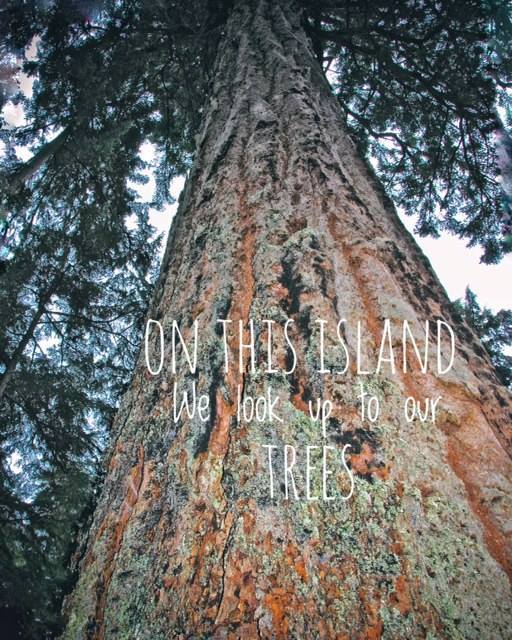 I believe this captioned anti-logging photo came from someone here on Bowen Island, though I’m not sure whom. Via the Bowen Island Everything Else Facebook group.

Teach Your Doctor: Doctors get almost no training about the essential connection between good nutrition and health. Those that have learned, didn’t learn from conferences or books. As Michael Greger explains (37 minute mark of video), when doctors explain their appreciation of this connection their story almost invariably starts with “I had a patient…” Learn to self-manage your health, starting with finding the diet that works for you. (Be careful to avoid the quacks, and beware what the food industry tells you.) And then teach your doctor.

How Art Speaks Through You: If you haven’t had enough Jim Carrey yet, here he is talking about what inspires his painting and sculpture, and what it gives him in return. And in that moment he was freed from the prison of becoming. (Thanks to Shana Deane for the link).

Living Simply in a Tiny Off-Grid Cabin: I know people who live like this couple in NZ. As they say in the movie “I have a suspicion that this is the blueprint [for living in the modern world] and if they had the chance to experience it, everybody would want to live this way, though it might be a long journey for some to realize it”. Beautifully crafted little film. Thanks to my friend Philip in NZ for the link.

To a Child There Are No Borders: An artist has erected a massive portrait of a Mexican child peering innocently over a section of the US-Mexico border wall that already exists.

How to Reward People in a Self-Managed Organization: The future of organizations (and communities) is collaborative self-management by small autonomous groups. But it would be easy to repeat the mistakes of large hierarchical organizations that claim to value one set of behaviours but actually reward another. Thanks to Tree for the link.

Let’s Call the Fentanyl Crisis What It Really Is: The CBC’s Jeremy Allingham laudably calls upon doctors, politicians and media to call the problem of people dying from toxic and adulterated street drugs — prescription or no — what it really is: a poisoning crisis, not an ‘overdose’ crisis. Their deaths weren’t suicides; they were murder by unscrupulous or indifferent pushers. Let’s stop blaming the victims. And let’s stop depriving chronic pain sufferers of much-needed prescription opiates and demonizing them as abusers. Have we learned nothing from prohibition?

The Scourge of Salmon Farms: Massive nets in pristine Pacific waters enclose millions of caged, sickly Atlantic salmon, commercially bred and fed unnatural industrial feed for profit, damaging local ecosystems and ravaging wild populations. They infect the waters with non-native diseases, they live horrible crowded lives, and they escape and breed with local species. The corporatist Harper government lied, denied and covered up the destruction, and so far Trudeau hasn’t proved any better. David Suzuki weighs in as well, arguing that if you want to save a whale, first save its food.

Noam Being Noam: Although he’s sometimes annoyingly strident, dismissive and closed-minded, Noam Chomsky has a brilliant mind. Listen to him talk about technology, politics and economics, and learn something new.

Close the Loopholes and End the Anti-Tax Rhetoric: While money and media attention is focused on right-wing groups trying to drown government in a bathtub, a group of Canadians says enough is enough, and wants unfair loopholes in the tax system closed. Trudeau was listening, but he’s now wavering.

Some Small Victories in the Fight Against Climate Change: It may be hopeless, but most of us are still driven to do what we can — what Joanna Macy calls “holding actions” — to delay and obstruct the worst environmental damages being wreaked in our own communities. Locally here there have been some small successes: The proposed construction of the Lelu Island LNG plant (that I wrote about in this short story) has been abandoned. Another LNG plant proposed for construction near Prince Rupert has likewise been abandoned. Here on Bowen Island we beat back a proposal for logging 28% of the island, forwarded as “non-negotiable” by a provincial crown corporation, through a massive letter-writing campaign and a planned 1000-person demonstration. And there are increasing signs that the gargantuan Site C hydro power plant may be stopped dead in its tracks — the independent consultants cite many reasons it is non-viable and wrong-headed, and the former head of BC Hydro wants it stopped. Still, as Vancouverite Bill Rees explains, these are just tiny, temporary wins: “Accelerated hydrocarbon development, better pipeline regulations and improved navigational aids for tanker traffic don’t cut it as sustainable development in a world that should be abandoning fossil fuels“. 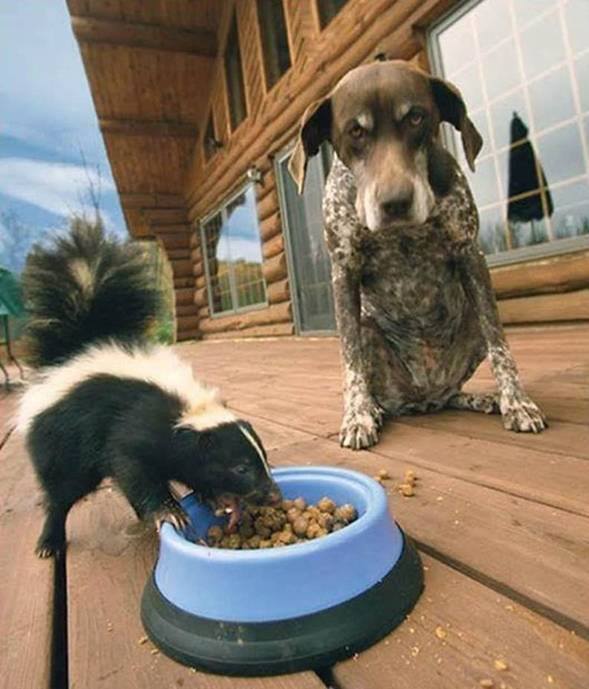 Image by Lloyd & Vicki Atkins, Vancouver BC, via CBC, with the caption “The two most overlooked virtues are patience and wisdom.”

If We Could See Inside Each Other’s Hearts and Minds: Then maybe instead of anger, fear, and sorrow, we’d feel compassion, appreciation, and connection.

The Littlest Eagle: In Sydney BC, a baby red-tailed hawk dropped into a Bald Eagle nest as food for the eaglets, decided it was home, and now acts like an eagle, and is fed by its now surrogate parents.

Mark Knopfler, Guitar Teacher: The master of the instrument jams a lifetime of key learnings about guitars into a 15-minute video.

Bringing Up Your Parents: Allegra Goodman’s brilliant short story cuts to the heart of the dance between well-meaning parents still trying to grow up themselves, and their adult children trying to make their own lives.

Albatrosses Learning to Fly: All self-taught, by trial and error, until they finally succeed, and then they spend most of the rest of their lives airborne.

More Alike Than We Think: Alike, a short animated film on conformity and courage from a Spanish cinematography team.

Casual Love: Carsie Blanton expounds, with incisiveness and humour, on the value of loving many people and not making a big deal about it. Thanks to Tree for the link.

Have Smartphones Destroyed a Generation?: Evidence that this modern technology preys on social anxiety and exacerbates mental illness.

The Complex Story of Julian Assange: The larger-than-life wikileaks founder shows some disturbing personal traits, though given what he’s gone through, perhaps a little paranoia is understandable.

Generation Désenchantée: French pop superstar Mylène Farmer leads a crowd of 81,000 young people in her protest-song anthem, a paean to the generations we’ve screwed out of a future. And then, six minutes in, she stops singing, turns the mics on them, and lets them carry it. Gave me goose bumps. Translation of lyrics for non-francophones. 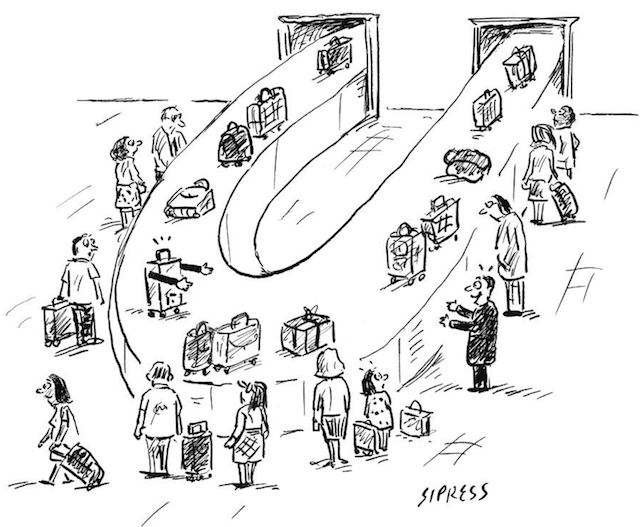 “There is no real magic in the world. Only love. The rest is just smoke and mirrors.”
— Russell Lewis (Endeavour Morse)

“While companies rarely say so explicitly, in practice they often want employees who can be let go easily and with little fuss, employees who do not expect long-term commitments from their employer. But, like employment, loyalty is a two-way street – making jobs short-term, commitment-free enterprises leads to workers who view temporary work contracts as also desirable. You start hiring job-quitters. A good job used to be one with a good salary, benefits, etc. Now, it’s one that prepares you for your next job.”
— Ilana Gershon, “Down & Out in the New Economy” (thanks to Ben Collver for the link)

“No matter how well-informed you are, you are surely not alarmed enough… When it comes to contemplating real-world warming dangers, we suffer from an incredible failure of imagination… [Likely near-future scenarios include] large-scale heat death… permanent extreme drought and famine… climate plagues [when polar melting unleashes frozen, fast-mutating diseases from which we have no immunity]… unbreathable air, smog that suffocates millions… perpetual war [over scarce resources], violence baked into heat… permanent economic collapse… and poisoned oceans.”
— David Wallace-Wells, The Uninhabitable Earth (thanks to Tree for the link)

3 Responses to Links of the Quarter: September 2017