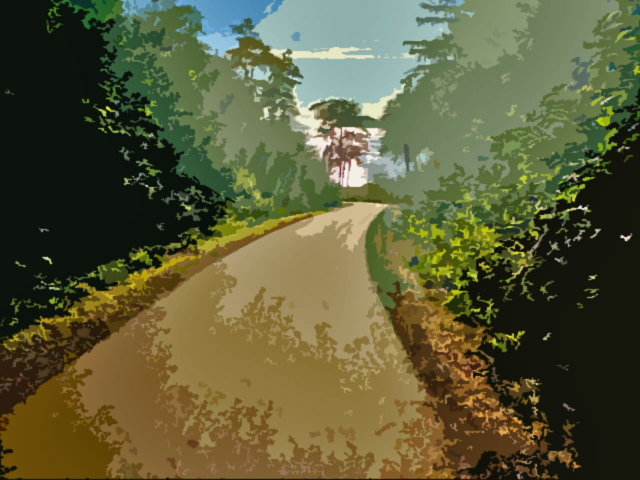 Our brains, crazy patterning devices that they are, are constantly trying to see patterns — connections, causes, continuities, reasons, purposes, justifications — for everything they perceive. There actually aren’t any, but that doesn’t stop the brain. It has to try to know, and there is something about the aha! that comes with seeing a new pattern that makes sense of what previously didn’t, that makes the self just jump all over it.

Internally, the self employs the brain and body’s reactions to rationalize and emotionally justify what the creature that the self presumes to inhabit has already ‘decided’ based on its conditioning and the circumstances of the moment. (Though the conditioning, the circumstances and the ‘decision’/action are all just appearances anyway.)

Externally, the self employs the brain and body’s perceptions to make connections — between apparent cause and effect, and apparent past, present and future. Some of the connections, such as Gaia theory or evolutionary theory, are quite elegant. They make sense to the self in some very satisfying, resonant way. They appear to hold under a broad range of apparent conditions and circumstances. But they are just stories, as delicious, true and ‘real’ as they may seem to the reactive, interpreting self.

The self is the ‘person-ification’ of the brain’s and body’s reactions, and the inventor of a false but compelling reality of separateness and meaning.

So we can have a model, a theory, of the self — how it seems to exist even though it is an illusion, how it seems to have agency and to make decisions, how it seizes on thoughts and emotions and sensations and perceptions and claims them as its own, though they are just stories and it (the self) is just illusion.

There is a certain comfort in ‘knowing’ that. We might be able to fathom that our self is an illusion, and a useless one at that, but the fact that there seems such an elegant, internally consistent and apparently predictive theory that seems to explain all these appearances is reassuring to the haggard, exhausted self — a self that wants there at least to be some plausible explanation for its illusive reality and everything that it perceives to be happening, when often everything seems nonsensical, unfair, terrifying and out of control.

There is no comfort in knowing that nothing matters, that nothing is real, that there is no time, no thing separate. It just doesn’t make sense, doesn’t resonate at all. It flies in the face of what seems to the self obviously real. There will never be a compelling argument to support it, or ‘evidence’ of its veracity. It’s just incredible. Even as science comes to recognize the reality of this terrible knowledge, most people won’t accept it, won’t be able to bear it. It won’t be the first time the majority will conclude that scientists are lying to them.

But the comforting model of what seems to be doesn’t actually offer much comfort, because it is based on a false premise. It’s not that the theory of evolution and Gaia theory fail to accurately describe what is apparently happening on Earth over time. It’s that there is no one and no thing separate to evolve or co-evolve, and no time in which to do it. Given “not A”, what possible value can there be in the apparent veracity of “if A then B”?

It is not that the idea that humans’ apparent actions seem entirely determined by their conditioning and the circumstances of the moment (rather than by the self’s moral and intellectual deliberations) is invalid. It’s that there are no humans, no actions, no conditioning, and no circumstances to determine anything or be determined by anything, and no moments in which to determine anything. The problem isn’t the logic of the argument of apparent causality, it’s the psychosomatic misunderstanding of the essential nature (and unreality) of the perceived elements of ‘cause’ and ‘effect’.

The argument about whether we have free will, or not, becomes moot with the realization there is no ‘we’.

So what remains is a series of rhetorical puzzles:

(1) How can the true nature of reality be ‘seen’ if there is no one to see it?

This is a complete mystery; but it has no ‘answer’. There is no one to ‘see’ anything, yet somehow things (apparently real and apparently not) are (apparently) seen. An interesting twist on “if a tree falls in the forest…”.

(2) If the self is not real, how can it have the seeming effect of making the human character more neurotic, and how can its absence have any effect on the character ‘left behind’?

It cannot. The seeming contraction and seeming expansion of energy when a self seems to emerge are just appearances. Anything is possible. everything is just appearance. Nothing is ‘really’ happening so there is no causality connecting the ‘appearance’ or ‘disappearance’ of the illusory self with any ‘subsequent’ tendencies of the apparent body/brain.

(3) What is to be done when the self continues to apparently think thoughts and feel feelings that contradict the knowledge that there is no self, causing needless anxiety and suffering?

Nothing. Or maybe just self-awareness of that apparently happening. Plus coping with enormous cognitive dissonance, both internally, and externally in the self’s dealings with the ‘world’.

(4) When it is seen that ‘nothing matters’ does this not necessarily bring about a more peaceful state of mind, and if so, whose state of mind?

No, because no one exists to have a state of mind, and everything is just an appearance; and there are no ‘real’ consequences.

Even simpler and more hopeless than anyone can imagine. Nothing to do, and no one to do it. Just the astonishing wonder of all that apparently is, which the self, tragically, ironically, can and will never see. A ghost, haunting its self.

1 Response to Simpler, Yet