this is a work of fiction

image by Vietnamese-American artist Dang My Linh from DeviantArt (I bought a copy of it — please support artists whose work you love!) 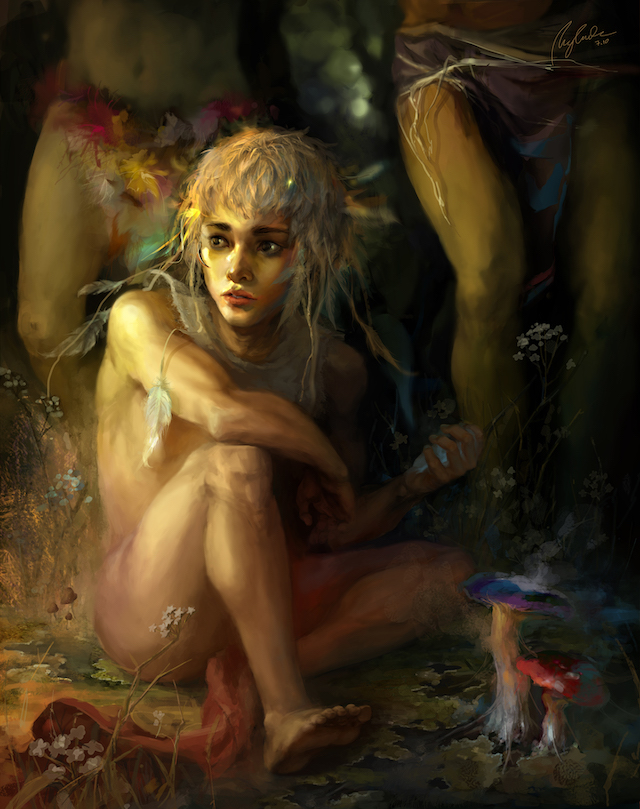 But my lot in life has been to be a historian. History is, as its name suggests, a kind of story. And all stories are fictions, a making-up of what seems to be seen, what seems to be happening. But no one can know. There’s evidence that history began with human settlement, some ten or thirty thousand years ago, with the advent of agriculture, civilization, and abstract language. For a million years before that there was no human history because there was no need for stories about the past or future. The very word prehistoric means “before the stories”. Prehistoric humans simply were; why would they be interested in other times, when everything they need is right there, right then?

I wonder as I write this if I might in fact be the last historian, writing the final accounting of the past and the possible future from this tenuous and dramatic time nearing the end of the 21st century. This is perhaps the end of human history, the end of the need for any more stories. The humans that remain when history ends will be, I think, once again content to just be. They will be artists, not story-tellers, bless them.

This is not at all what I think most humans thought would be their final story, even as recently as a couple of decades ago. The first half of the century was one of collapse — of the over-hyped, mis-distributed and dysfunctional economy, and the collapse of stable climate, and of much of human culture. It’s an unfortunate word, collapse — I much prefer the thunderous french word s’effondrer, which clarifies that it is a crumbling of the foundations, from the bottom up, on which everything else was built, and which, by its use of the réflexif, admits that no one ‘outside’ was to blame; that things simply fell apart from within.

That was a time when everything was falling apart, seemingly endlessly, as all efforts to keep things together or to pull them back together failed. All predictable, of course: Any historian who had studied how life in the previous decades had unfolded in chaotic places like Lagos, Nigeria for example (back when it still existed), and that sad but hopeful city’s desolated, immiserated rural hinterlands, would see the model for how life would unfold everywhere on the planet over the decades to follow. The almost unlimited human capacity to adapt and persevere in the face of suffering has been both stunning and horrifically tragic. I can’t imagine any other species that would ever choose to live a life of constant stress, precarity, scarcity and struggle — other species would have the good sense to just give up, walk away, and leave the planet to those better adapted to the ghastly changes that have transformed the planet these past five decades. But not humans.

Something happened, however, amidst all the chaos, that transformed everything yet again, and that’s what this story is about.

It began in the 2020s, at the start of the waves of financial and economic collapse. There had recently been, at that time, great interest in the commercial, cultural and ecological potential of mushrooms. They were seen as pathways to the noosphere, miracle foods and medicines, and renewable replacements for a wide variety of scarce and non-renewable materials. There was an interesting convergence among techno-utopians, psychonauts, and commercial enterprises, that resulted in the development of some ‘living’ products made from mushrooms that would supposedly offer self-regenerating properties. So while they were initially used to produce self-repairing textiles, ecological toxin treatments and some new types of medicines to deal with cancers, viruses and autoimmune diseases, it wasn’t long before people were experimenting with ‘wearing’, consuming, and developing new products using ‘live’ mushrooms and other fungal life forms.

What they quickly discovered was the enormous symbiotic qualities of many fungi. They not only did amazing things on their own, they did some even more amazing things when they were combined with plants and animals. While this provided a small boon in new innovations, it could not begin to offset the series of economic collapses that, in just two decades, basically wiped out the capitalist economy, returning the planet to a radically re-localized economy built around sufficiency, not growth.

So while the commercial potential of mushrooms was largely, of necessity, shelved, the abundance of mushrooms and the paucity of paid work led a lot of people to explore what mushrooms had to offer personally and locally, and they were aided in these explorations by communications with like-minded people, through what was left of the internet.

An unexpected development was the discovery that, in some of the new mushroom-based skin patches being used to treat a variety of illnesses, there was some lingering symbiotic activity occurring on and inside the skin of the human patients. Because of their renowned resistance to genetic modification, mushrooms were being used to try to treat cancers and other genetic disorders, and it was found that somehow the mushrooms were ‘training’ various types of human cells to resist genetic modification, while the human cells were somehow ‘training’ the mushrooms how to be ‘smarter’ symbionts, infiltrating their partners more quickly and profoundly, and altering those life-forms’ functions in ways beneficial for both organisms.

There was of course a backlash when this began to happen — those fearful of these new discoveries began warning that mushrooms could ‘infect’ and ‘take over’ their human ‘hosts’, as some fungi apparently do to some insects. But with centralized systems falling apart, there was no way to coordinate any large-scale control over the experiments, so they continued.

And some of those experiments were producing evolutionarily significant changes. Certain types of mushrooms, it turned out, could, under the right conditions, grow to permeate the entire skin cover of the human symbiont, seemingly adding a great deal of protection to humans who had suppressed immune systems, and then penetrating further to re-regulate the immune systems of those with the opposite problem — autoimmune diseases. In addition, they interacted with the skin — the body’s largest organ — to help it deal with a variety of skin conditions, eventually ‘moulting’ a large part of the epidermis and leaving the human (or perhaps the human-fungal symbiont) looking much younger and healthier.

But the real game-changer was when some of those who were allowing their fungal symbionts extensive and prolonged access to their bodies, found that the mushrooms were actually rewiring the brains of these humans. In particular they were suppressing and rewiring the sympathetic nervous system. The explanation given by scientists was that the mushrooms perceived the SNS to be dangerously overactive and reactive and hence unhealthy for the combined symbiont, so to ‘heal’ the human it shut off the engrained ‘default pathways’ of the SNS.

The effect was extraordinary: The humans so ‘healed’ reported that it was suddenly seen that everything was just an appearance, that ‘they’ as ‘separate’ entities didn’t exist, and that everything was perfect just as it was. Yet it seemed they continued to function just as before, just without the reactivity, in a more equanimous and clearly at-peace way. And the change was permanent, even when the human ended contact with the fungus.

Given the terrible levels of stress endemic in the collapsing human society of the time, it’s probably no surprise that for most, the fear and moral doubt that surrounded this apparent dramatic change in personality was overruled by the desperation to have the peace of mind this SNS ‘re-boot’ seemed to offer. There were lots of holdouts at first, but once it was recognized that this seeming ‘altered state’ made dealing with the cascading crises of the time much more bearable, it wasn’t long before it became as automatic as a vaccine. Everyone was doing it, and there was no going back.

What was not realized was that this change was more than just an ‘altered state’. It was in a sense the end of the human individual, the end of the sense that people and the human race were in any way apart or separate from all life on the planet. As such it was the end of human needing, and hence the end of human volition. In the radically relocalized world where all that was now on offer was sufficiency, this ‘end of needs’ came at an ideal time.

That’s not to say things got materially easier or prosperity increased. Rather, it was seen that things didn’t need to be easier, and that there was no one or no thing separate to be prosperous. So human birth rates plummeted to almost zero, partly because it was now intuitively seen that there was insufficient food in the post-industrial world for all the humans and other creatures on the planet, and partly because it was intuitively seen that there was no reason to bring more children into the world until was a scarcity of them. Death rates actually dropped as wars became too expensive and were seen as pointless, as the technologies that caused the most deaths fell into disuse, and as people had no choice but to eat less, but better, with processed foods and animal fats no longer being available in the new ‘sufficiency’ economies.

While the struggle is not over, the remaining human population, down to less than half of their peak numbers, seems accepting of their new lot, and healthier to boot. With the collapse of the internet, a vast amount of human knowledge has been lost, but no one seems concerned about it. Humans once again live in community, and the drive to acquire, to succeed, to make things larger or better, seems to have evaporated.

Humans still talk, but much less than they used to. Without intention, the motivation for talk is mostly gone. There is more singing, more playing, more creative activities, but little desire for anything to last. With the sense that everything is one, connected, there is no more fear of death. There is no urgency for anything. I suspect that, to the humans used to a hyperactive-SNS life, their descendants a mere half-century later would hardly even be recognized as civilized; they would seem more like prehistoric tribespeople.

So mostly, now, there are no stories. It was the children who gave up on them last. When the adults started forgetting the ‘old’ stories and forgot how to invent new ones, the children, for a while, shared and created them among themselves. But even to them they soon seemed foolish, just make-believe. Better to sing, to dance, to play, to just lie in the sun together and laugh, and wonder.

And without stories there is no need for old historians anymore. I think it’s for the best. From here the entire arc and trajectory of civilization looks to be a form of collective madness, a colossal evolutionary misstep. The SNS likely evolved, like a fire alarm, to alert us that danger was at hand and that we needed to fight, or flee, or freeze. But when it is ‘on’ all the time, even in our dreamful sleep, it seems completely dysfunctional, of no use at all. I don’t think anyone would have guessed that it would be fungi, which have neither nervous nor vascular systems for signalling stress, that would find and flick the ‘off’ switch, for our collective good. But they did so, just in time.

And that’s the end of the story.

3 Responses to What Happened Here