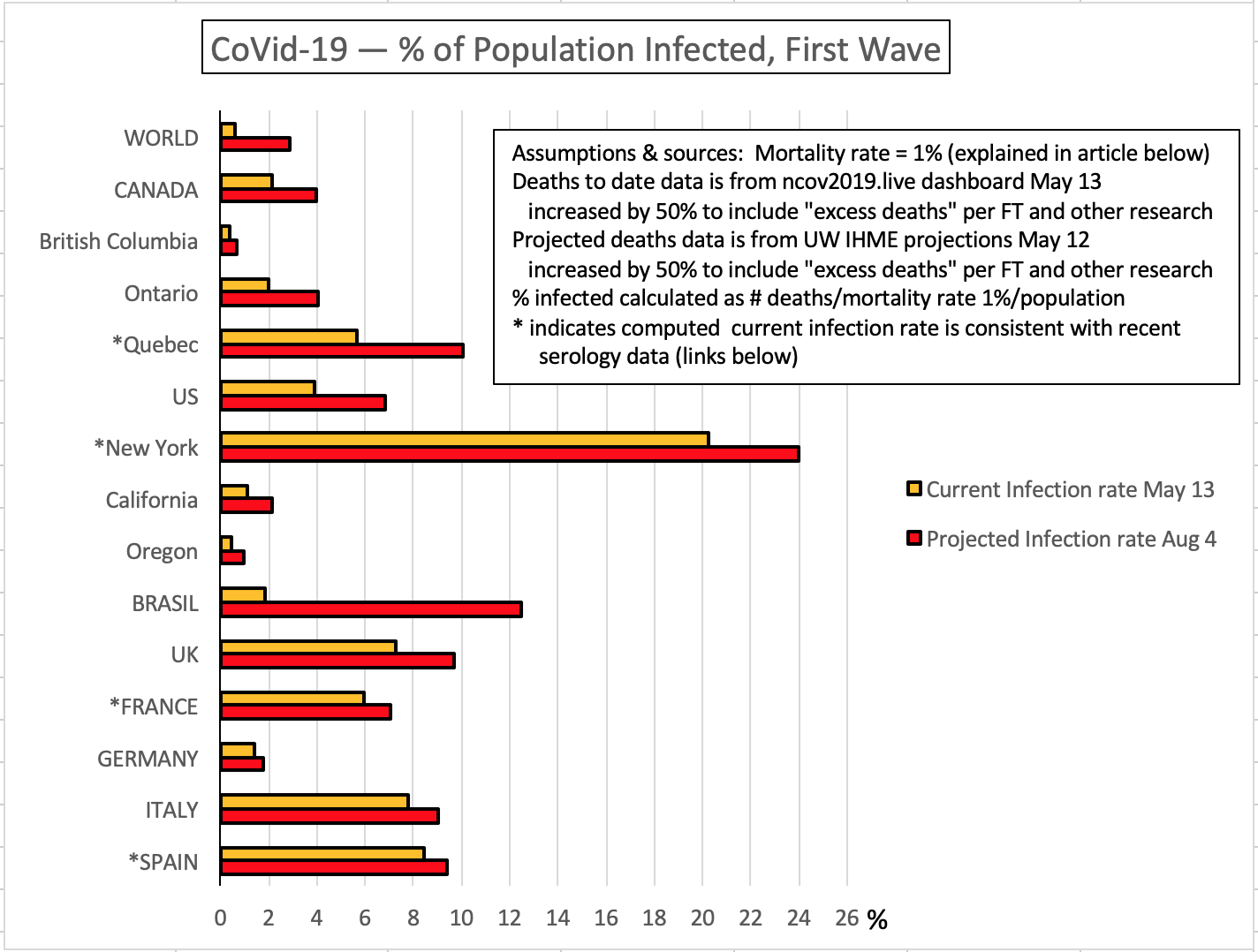 author’s rough estimate of current and projected CoVid-19 infection rates, based on data listed above and in the article below; data for the “world” and for Brasil are interpolated from other sources using various assumptions, and are hence much less accurate than other data

A double dose of really bad news today (May 13, 2020) about what the future may hold for the pandemic.

The first news was a set of fairly well-substantiated research data from New York, France and Spain that all came to the same conclusion: The rate of infection so far is a lot lower than we’d thought, and the mortality rate is thus a lot higher than we’d thought.

For New York State, which has a population of about 20 million, the first results of serology (blood testing for CoVid-19 antibodies) suggests that only 15% of the state’s people (about 3 million people) have been infected so far. Official reports are that about 20,000 New Yorkers have died, and a report today in the NYT suggests again that “excess deaths” in New York and in many other states to date are likely in the range of 50% more than the official reports (for understandable reasons I’ve discussed in earlier articles). 30,000 deaths divided by 3 million people = a 1.0% mortality rate, which is 2-5x what most of us were expecting based on the low mortality figures reported to date.

Results for Indiana support this unexpectedly low infection rate: there they have only had 3% of serology tests come back positive, although they’re earlier in the curve than New York State. Likewise it has been estimated that Québec’s infection rate is only about 5%.

For France, which has a population of 60 million and the same death toll as New York State, their serology tests have come back only 5% positive (meaning about 3 million people have been infected in France if the sample is representative). Their official death toll of 20,000 has likewise been shown to be only 2/3 of the “excess death” numbers there for the year to date, compared to recent years, so once again 30,000 deaths divided by 3 million people = 1.0% mortality rate.

The early numbers for Spain are very similar, and data for other countries don’t suggest these numbers are inaccurate.

What does this mean? If the first wave mortality rate had been, say, 0.25% (similar to the mortality rate for measles, as a lot of us were predicting), and the final actual first wave US death toll turns out to be 220,000 (again, assuming 50% more than UW projected “official” numbers) then that would mean 220,000/0.0025 = 88 million Americans would have been infected by this summer. That’s only 27% of the population, but it’s a significant proportion that hopefully would be immune to the next wave. So that’s 220,000 deaths, or 0.07% of the population dying while 27% of the population gets (we hope) immune from further infection.

But if the actual mortality rate is 1.0% (which now appears to be closer to the case) — 4 times higher — that means only 22 million Americans (just 7% of the population) will have developed any immunity by this summer that could protect them (and their contacts) in the face of a potential upsurge from relaxing social distancing too soon (which is already starting to happen), or from the next wave, while the other 93% of Americans now have a four times higher risk of dying from the next upsurge or wave of CoVid-19 than we thought was the case. And it leaves us miles short of the 60-70% minimum proportion with antibodies to the virus needed for so-called herd immunity, even in heavily-hit areas like New York.

The news gets worse. Just a few hours ago, the supreme court of Wisconsin struck down the Governor’s stay-at-home order extension in that state as being unconstitutional. That leaves that state with no legal regulations against pandemic spread whatsoever a week from now when the original period of the order expires, unless the recalcitrant Republican right-libertarian-dominated state house suddenly has a miraculous change of heart. This will almost certainly result in copycat constitutional challenges in every other state, that might spell the end to any systematic social distancing regulations in the US, which already has the world’s highest CoVid-19 death toll.

The disease is presenting us with several simultaneous paradoxes. Clearly, with only 4-7% Americans infected so far (barring more dangerous rulings like the Wisconsin one and commensurate irresponsible behaviour and death spikes), in many parts of the US many people don’t know a single person infected by the disease, and therefore can’t really believe it’s a serious problem. They will only believe their governments, and the stories they hear from hard-hit centres, for so long in the absence of any personal confirmation, before they will tend to fall victim to cynical manipulative politicians and/or conspiracy theorists. Many will become at least sloppy, if not outright defiant, about the kinds of rigorous social distancing that have so far kept the death toll so low.

The situation in other parts of the world is not that different. The infections tend to be extremely localized, principally in areas that have high population density (per household, not per square mile), high mobility, and low incomes requiring people to work long hours often in high-risk positions like private nursing home orderlies, billeted shift workers and slaughterhouse workers. They spread most easily among seniors and those with compromised immune systems, especially when those people are crowded together in sometimes-derelict institutions. For everyone else, the disease may be all but invisible. The nature of this disease is that social distancing seems to work incredibly well at limiting its spread, but in the absence of social distancing it spreads like, well, a plague.

We generally know little about these viruses, such as why they seem to have seasonal peaks and recurrences, and how exactly they make us sick. The probability of us developing a reliable vaccine in the near future is reportedly low, and there is a large enough population who will refuse the vaccine (10% is probably sufficient) that even if it is developed it may not be enough to defeat the disease from coming back again and again, until after our natural or vaccinated immunity has worn off, or the virus has mutated to a new form we are not immune to. For that reason some believe it will become endemic, which means that as many as 1% of the world’s population (78 million people) might eventually die from it, unless it evolves into a weaker form or an effective vaccine is developed. A worst case scenario, of course, but not a highly-improbable one. (This compares to the 3% mortality rate — 50 million people — of history’s most deadly pandemic in 1918. But that 3% was due to its mutation to a virulent second wave form that killed mostly the young and healthy.)

What we do know is that between 90% and 99% of citizens of most developed countries are still likely fully susceptible to CoVid-19 now, exactly when many of their governments, oblivious to the lessons of history, are beginning to ease restrictions that have kept the vast majority of their citizens from getting infected, and of whom about 1% will likely die when they do (that 1% being an average varying greatly depending on age, health and living conditions). That means a virtual certainty of an upswing in cases and deaths to as much as 20 times the current tolls.

We also know that additional waves are likely, and though they are likely to be weaker, there is a chance they may be stronger, or even much stronger. And they are likely to last anywhere from one to three more years. If you’re invested in the stock market, you may want to hope that the majority see no problem with tens of millions dying as the price of restoring economic ‘growth’. That is probably the cost. Whether we will choose to pay it remains to be seen. But the odds of us escaping relatively unscathed are suddenly looking much worse than they did even a few short days ago.

This is the sixth of a series of articles on CoVid-19. The fifth is here. The fourth, with a link to the first three, is here.