(Reza at poorlydrawnlines has a new book)

Last month I led off the monthly links post with the lyrics to “When’s It Going to End?” So maybe I’ll lead this one off with another song about bewilderment and uncertainty, Bob Dylan’s Ballad of a Thin Man: 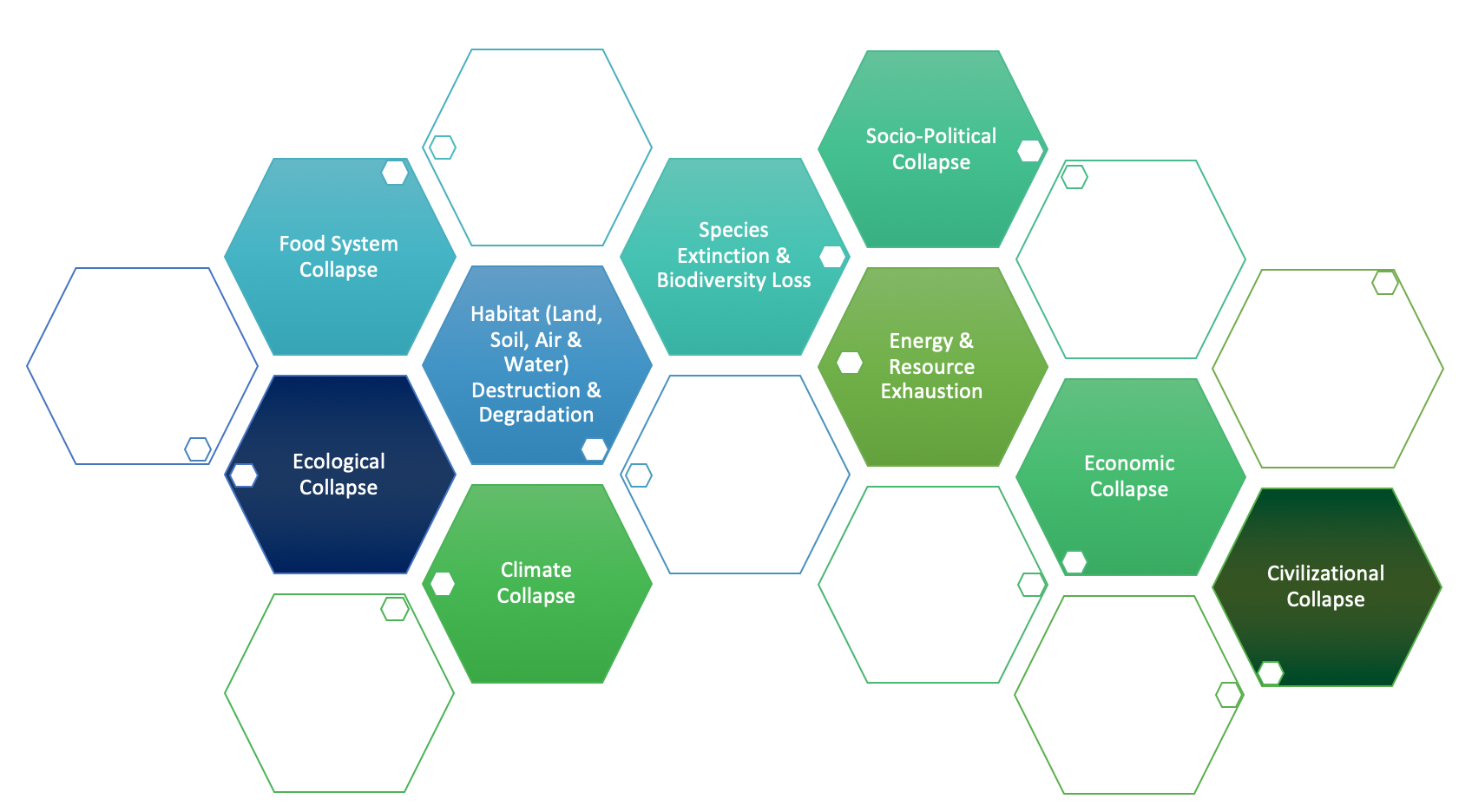 What would a real green new deal look like?: Megan Seibert lists what we would really have to do, immediately, to have any chance of bringing a halt to the sixth great extinction of life on earth. It’s an inspiring list. It’s also totally impossible. But good to know. Thanks to Michael Dowd for the link.

The coming Greater Depression: Nouriel Roubini predicts a slow “U-shaped” recovery from CoVid-19, followed almost immediately by an economic depression longer and deeper than any we have ever seen mid-decade. Payback time. You can watch the video or read the article.

The end of the “human climate niche”: Even with prosthetic technologies, humans (and their food crops) can only survive, in any numbers, in climates with an average annual temperature between about 11º and 15ºC. Given current temperature rise forecasts, that means between 1.5 billion and 3.5 billion climate refugees by 2070.

Planet of the Humans: I haven’t watched Michael Moore’s latest film, because his blame-y, in-your-face style grates on me. But I’ve read enough foaming-at-the-mouth criticisms and reviews by both sides to know that despite its oversimplifications and obsolete assertions, its fundamental arguments — that we can’t innovate (with “renewable” energy) our way out of climate collapse, that an immediate and drastic reduction in consumption, a massive redistribution of wealth, and a coordinated effort to humanely reduce human numbers are absolute preconditions for even mitigating collapse, and that capitalism has completely coopted the “environmental movement” — are sound. 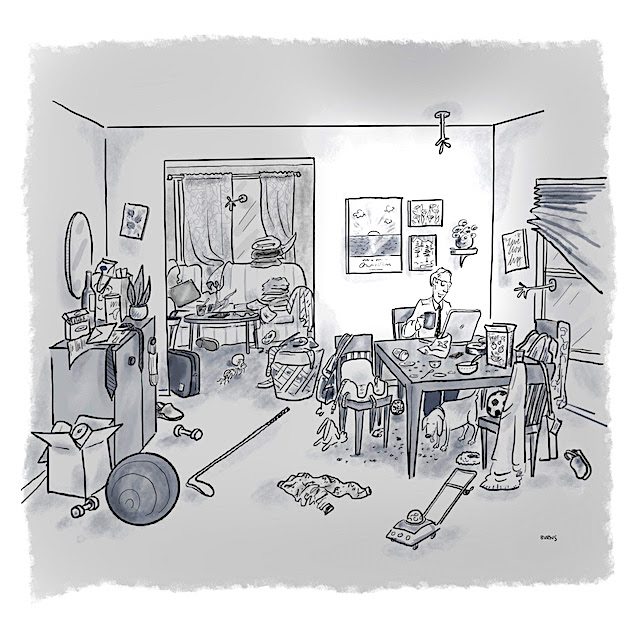 cartoon in the New Yorker by Teresa Burns Parkhurst (if you don’t get the joke, look again)

Exit, stage four: PS Pirro relates our responses to CoVid-19 to the notorious five-stages-of-grief model. Republicans are still at stage 1 (denial) and 2 (anger), and progressives are mired in stage 3 (depression) or 4 (bargaining). Pretty much where they stand on climate collapse, too. Peggy, ever the wise poet, gets it exactly: “Covid is just the guy with the broom at the end of the cartoon, sweeping the dust from the stage.”

A coping strategy: An acquaintance, April Rinne, describes a process of internal self-examination and self-awareness:  challenging our assumptions (and hence our fears) about the future, focusing on our collective rather than personal opportunities for improving things (and accepting our responsibility to the collective), and taking advantage of the current slowdown to, well, slow down, to deal with current and looming crises.

Never going back: Canadian E-Commerce firm Shopify, which recently (and improbably) became the highest valued company in Canada (such is the mad state of the stock market), has decided that it’s going to make its new work-from-home processes its permanent default. So has Twitter, apparently, though there there’s a catch: a pay cut.

Mayors are doin’ it for themselves: Forty mayors of the world’s most progressive large cities, responding to the absence of national and state leadership, have coalesced to produce a joint recovery task force and framework. They’re using Kate Raworth’s Doughnut Economics model as a guide, which is great. Thanks to my Municipalities in Transition colleagues for the link.

And so are some small cities: Maricá, Brasil is using the pandemic to deepen and advance economic reforms under the Solidarity Economy umbrella: guaranteed annual income, support for the poor, education reforms, a local currency, and support for workers and collective production. Thanks to Tree Bressen for the link.

Gut resistance: If you want your body and immune system to be able to fend off disease, you might consider switching to a whole plant-food diet.

Going the distance: If you have irresponsible neighbours, now might be a good time to practice social, economic and political distancing.

Food for thought: Liminal offers up concise (30 min), novel podcasts with some of the world’s brightest and most creative thinkers. 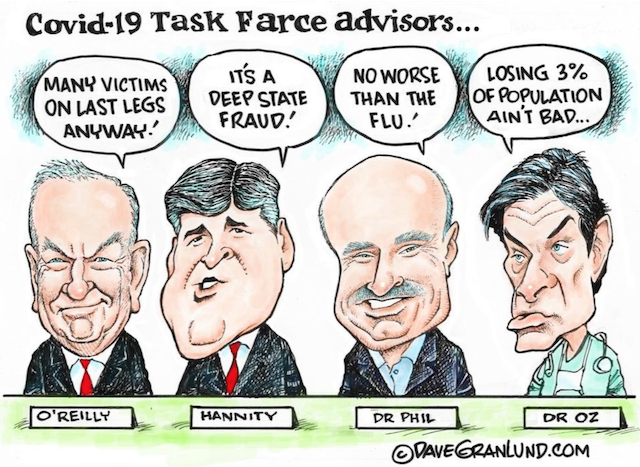 The wacky US mercenary plot to kidnap Maduro: As if politics weren’t strange enough, apparently the Venezuelan opposition leaders signed a contract with a bunch of mercenaries in Florida to abduct Venezuelan President Nicolás Maduro as part of a coup. But the hired Rambos botched the job, and now the Venezuelan opposition is pretending they didn’t know them. Still, Western leaders refuse to stay neutral in this horrible mess; we will never learn. 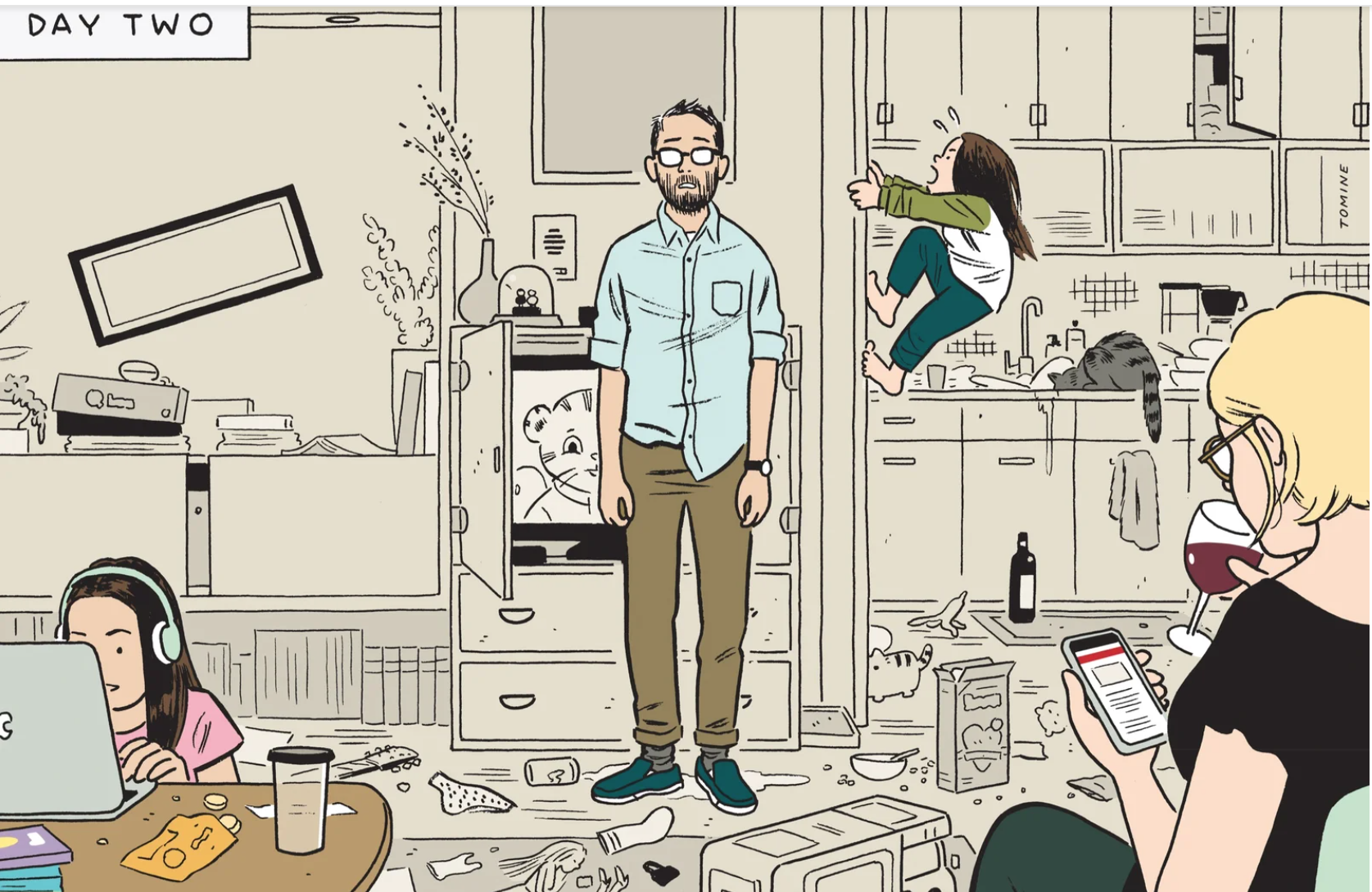 cartoon in the New Yorker by Adrian Tomine

Why are we really in lockdown?: Jemima Kelly writes a great exposé on the life and death politics of CoVid-19. The moral calculus we employ in balancing death with economic depression includes: how many of the dead would have died anyway, and how soon (provisional answer: not many, and not soon); what the “excess deaths” really died from (provisional answer: mostly but not all CoVid-19 related); the economic and social consequences if the hospitals are overwhelmed to the point of chaos, health worker walkouts and dieoffs, and massive death tolls (provisional answer: too high to risk); and the economic ‘value’ versus ‘cost’ of preserving and prolonging life (too complex to provide any provisional answer on); the “rule of rescue” (that we’re mostly and illogically willing to pay a lot more to save someone from imminent death than to prevent the need to save them from arising); and how we innately care about one stranger in peril right in front of us than a thousand or a million in peril we don’t see. The majority’s answers to these questions will likely determine how we will deal with the immense moral questions we will face as we shift into the second wave. Well worth a read, and a ponder.

Meanwhile in the CoVid-altered-for-now world: 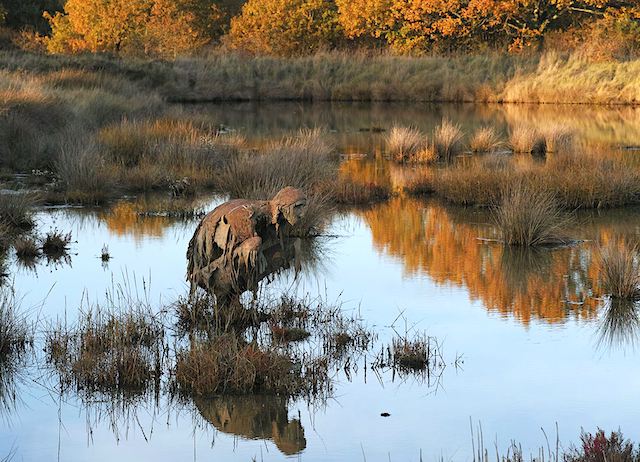 The company meeting: Idled sports commentator Andrew Cotter, renowned for his lockdown-era commentaries about the ‘sports’ his two dogs engage in, now has his dogs playing the roles of staff members in his corporate Zoom meeting. Really funny.

The great disappointments: The Onion interviews a man disappointed to discover that being idled by CoVid-19 hasn’t jump-started his creativity. Thank to Tree Bressen for the link, and the one that follows.

Social distancing vs baby foxes: Authorities had to erect fencing and screens to prevent a family of foxes and an adoring audience from admiring each other in Toronto. They claim to have used modern “conditioning theory” to ensure the creatures did not get too habituated to close contact and consequently become dependent. They were apparently referring to the foxes.

The Aurora Australis in Antarctica: Stunning video showing a full Aurora and the Milky Way at the same time.

Jelle’s marble runs: For five years Nederlander Jelle Bakker has been running and videoing a series of “races” of marbles, including courses modelled on Formula One tracks and 120m-long outdoor sand tracks. If you’re like me (or author/Vlog brother John Green, or humourist John Oliver, or any of the million plus subscribers) you find these things addictive to watch. Here are samples of my favourite indoor and outdoor series, but he has hundreds.

The ultimate conspiracy theory: Satirist Andy Borowitz starts the rumour that enemies of the US developed Trump in a lab.

I got a cat: Gabrielle Bell’s cartoon strips are beautiful, raw, and alternately charming and disturbing. Her newest one describes her bonding, sort of, with a new cat.

Learning about viruses and pandemics: If you’re like me and one of your coping mechanisms is learning everything you can about a challenging subject, here are some useful links to information on past pandemics, and a website that lets you simulate their spread: 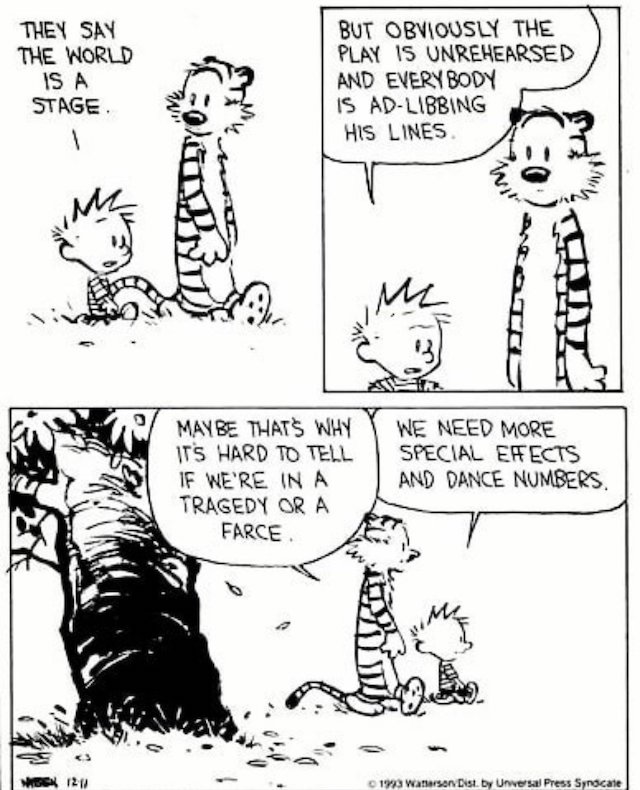 Now that there is no longer, apparently, a self named Frank McCaughey, though there never really was, the things that that character is saying and writing are seemingly very different from what they were ‘before’, such as:

Then, there is a suggestion, that there is no you, now nor ever,
doing that feeling of apartness.
No you seeking.
Only that sense arising. And Falling.
In everything. For no one.

More empty than yesterday’s dream for tomorrow
and full to the brim of all that appears to be happening.

This ‘you’
that seeks to be at ‘one’ with ‘everything’
is everything being that.

Already. You are not.
Already
this is nowhere.

Otherwise ‘Frank’ is the same as ‘always’. Meanwhile Tim Cliss is doing weekly Zoom videos for now, and I feel almost like part of his ‘family’. Or perhaps it’s more like a support group. Frank is also ‘hosting’ Tony Parsons’ Zoom meetings now; this one is especially good at conveying the Radical Non-Duality message. Jim Newman’s next Zoom session is June 7th.

If any of this is of interest to you, email me and we can chat about it. Not trying to sell anything, but I find it fun, and strangely calming. Even though it’s hopeless, and meaningless, and there is no path. 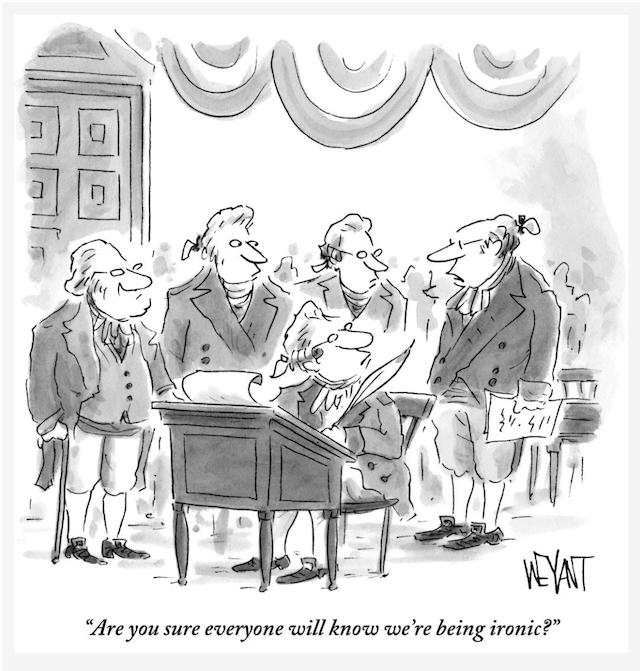 From an unknown author, cited by Marj Plumb on Facebook (thanks to Alison Rose Levy for the link):

If a medically-informed response to a pandemic creates economic hardship so serious that the economic impacts are more deadly than the virus, you change your fucking economic system not your response to disease.

And from US health journalist Alison Rose Levy herself, on Facebook:

I’d like to see the health community signing on for Medicare for All. I’d like to see a prominent spokesperson promote that. Once the health insurance companies are out of the way, we can talk about health promoting strategies. Until then it’s just a lot of hot air leading towards the perpetuation of an unjust two-tiered health system. If you won’t take some basic steps to protect others, just take a seat.

From New Jersey (on “loan” from Minnesota) emergency ICU health-care worker Kristen Martins (thanks to Paul Cienfuegos for the link):

My message to those protesting the stay-at-home orders in Minnesota, Tennessee, Washington, Colorado, Florida, Illinois, California, Arizona, Montana, and any other state & to Trump:

Come take a step into my daily hell. Come tell me to my face that “fear is worse than the virus!” Come walk into the trailer full of dead, rotting humans, and I will pick out a spot for your body, since it is “your body, your right”. If “Jesus is your vaccine”, tell me why I am taking the rosary off my patient’s lifeless body?

Anyone protesting should forfeit their rights to receive any medical care. NONE. You are putting the lives of anyone you come into contact with because of your boredom and selfishness. You are putting every single healthcare worker’s life not only at an increased risk, but your disrespect for humankind because of your ignorance and stupidity is beyond appalling.

On Drinking Alone by Moonlight

Here are flowers and here is wine, but where’s a friend with me to join
Hand in hand and heart to heart in one full cup before we part?
Rather than to drink alone I’ll make bold to ask the moon
To condescend to lend her face the hour and the scene to grace.

Lo, she answers, and she brings my shadow on her silver wings;
That makes three, and we shall be, I ween, a merry company.
The modest moon declines the cup, but shadow promptly takes it up,
And when I dance my shadow fleet keeps measure with my flying feet.

But though the moon declines to tipple, she dances in yon shining ripple,
And when I sing, my festive song, the echoes of the moon prolong.
Say, when shall we next meet together? Surely not in cloudy weather,
For you my boon companions dear come only when the sky is clear.