screenshot of top of a recent CBC headlines page

A comment on free access to information: Over the past three months, more and more newspapers and other media sources have put paywalls, ad-blockers, compulsory ‘registrations’, article limits and other restrictions on their sites. I appreciate that many of them are hemorrhaging money, but these information blockages seriously threaten public access to essential information and perspectives that are desperately needed to counter the endless barrage of ‘free’ misinformation and propaganda on social media, Faux news and anti-democratic and conspiracy theory websites and publications. Many of the links in my Links of the Month summaries now require sophisticated ‘readers’ and other workarounds to view without having to subscribe and pay. I think this is an untenable situation. Independent, publicly funded media (CBC, BBC, NPR, PBS, Al Jazeera and some local media) aren’t perfect by any means, but at least they’re free, and surveys indicate that their readers believe they are more credible than other ‘free’ information sources. We need to create more of them, funded by taxpayers not by vested interests, and financed by a tax on social media, and put an end to the need for quality journalism to be buried behind paywalls while social media companies earn more money than they can spend vomiting out an endless stream of ‘free’ misinformation and propaganda.  /rant 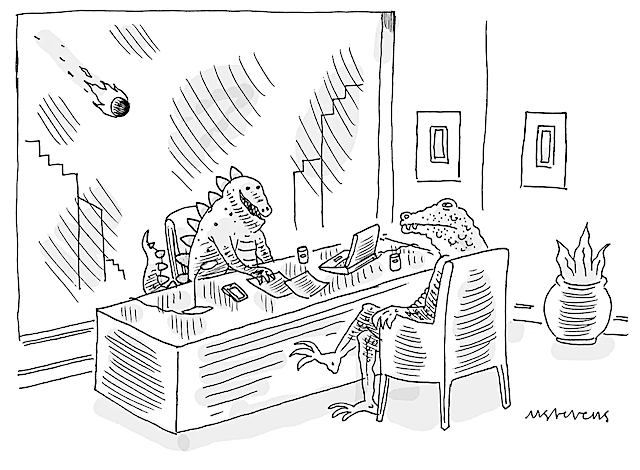 New Yorker cartoon contest cartoon by Mick Stevens; my suggestion that it works better without a caption wasn’t accepted

Blame these guys and Just do this: We’re starting to see more and more treatises that quite reasonably predict civilization’s collapse, but then leave the poor reader reeling with a blameful diagnosis of how it got this bad, and a preposterous way out ‘if we just all do this’. Latest up are these two (thanks to Sam Rose for the links):

The Twenty-Fifth Hour: Seventy years ago, when the earth’s human population was just 2.7B and there were no computers, no nuclear power, no portable electronics, and no knowledge of DNA, C Virgil Gheorgiu wrote a prescient tongue-in-cheek Orwellian story about humans who ended up in thrall to their machines. Thanks to John Whiting for the link.

Planet of the Humans, continued: More nuanced reviews of the much-loathed film I discussed last month, from Richard Heinberg and Bill Rees. And a clarification from CASSE’s Brian Czech that none of the aforementioned are opposed to renewable energy, just to the preposterous notion that it can save us from civilizational collapse. If you wonder what good is it then, well, join the cognitive dissonance crowd, and we’ll sign up for solar together.

The death of US oil: A geologist explains why expensive, fracked (and Tar Sands) oil will never again be economically viable. Pre-civilization-collapse, there will now always be cheaper alternatives. Post-collapse… well, never mind.

The collapse of the US dollar: Stephen Roach writing for Bloomberg says that the US dollar is at least 30% overvalued, and explores how the correction might come about. Want to then see what a real race-to-the-bottom looks like?

What is sustainable?: Eugene’s Richard Reese is writing a far-reaching book on our essential human nature and where we’re headed, called Wild Free and Happy, which offers “zero miraculous silver bullet solutions to our slithering multitude of predicaments”, and he has posted much of what he’s written so far on his blog. I particularly like this chapter that reveals our species’ essential purpose: to be eaten. Hear that, salvationists? 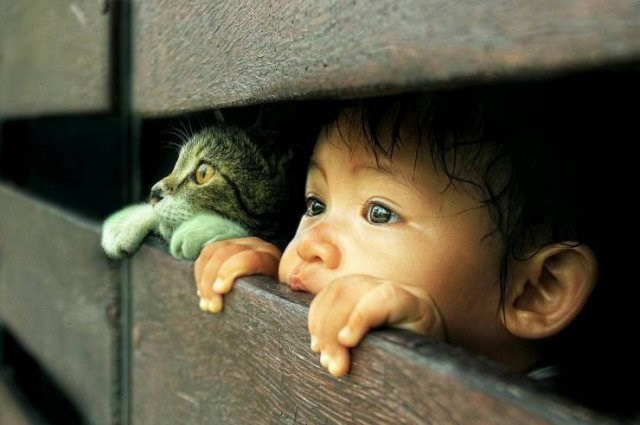 Making sense of the violence and abolishing the police:

Signs of change?: Some see the astonishing pro-protest actions of Flint police, Houston police, Miami police, and white women in Nashville, as evidence of a sustainable shift in attitudes towards systemic racism. Others, of course, think it’s meaningless political expediency or momentary lip-service. I guess we’ll see. 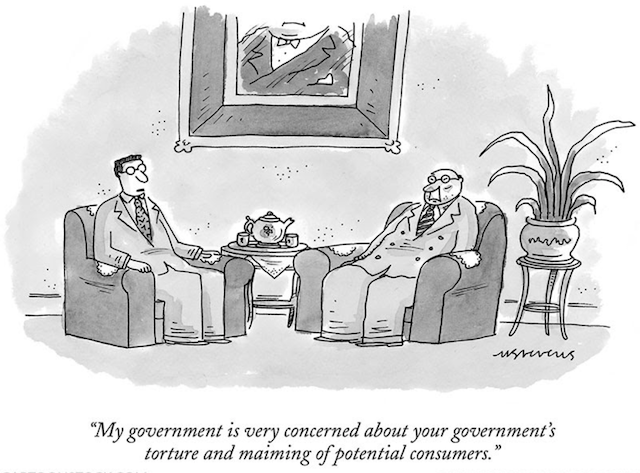 cartoon by Mick Stevens in The New Yorker

The ‘liberal’ media’s cowardly passion for ‘both-sides-ing’: The Nation says the obvious: “You don’t have to publish both sides when one side is fascism.” See also Thoughts of the Month below.

Facebook employees reject Zuckerberg’s weaselling: Even Twitter had to react when Trump advocated shooting protestors. But not Facebook. Their feeble leader gutlessly apologized for his platform’s pandering and encouragement of hate-mongering and right-wing violence, on the basis that his company just provides a platform and has no responsibility for its content. That was too much for many of his employees.

Canada the good…: Canada’s PM had the decency to take a knee at the local anti-racism protests, and his 21-second pause when asked whether he would condemn Trump’s ghastly response to the protests spoke volumes.

… and Canada the bad: 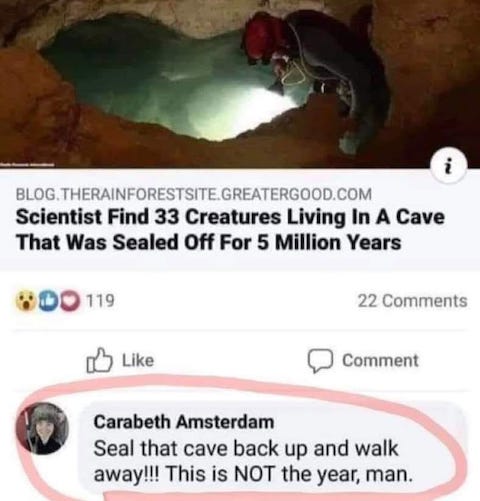 clever FB reply to a recent archeological discovery; thanks to Dick Richards for the link

Your CoVid-19 toolkit: FT’s John Burn-Murdoch reminds us of the tools we have at our disposal to reduce our, and others’ risk, as cases begin to rise again: 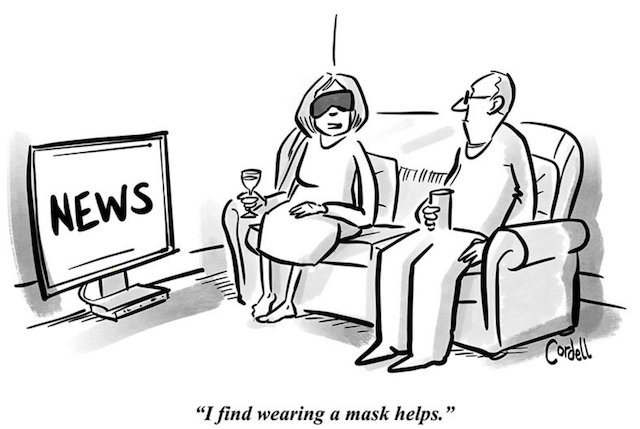 cartoon in the New Yorker by Tim Cordell

Solace in learning: As TH White famously wrote, the thing to do when you’re feeling bad is to learn something new. Like how to play the piano. Thanks to PS Pirro for the link.

Speaking with my former self: Julie Nolke visits her former self to explain how CoVid-19 and other events will change everything. Brilliantly done, including the sequel. Lots of copycats online now, but Julie did it first.

Hammock bears: You just have to watch.

Read blogs instead: Ugo Bardi explains why you learn more from blogs than other online reading sources. Thanks to Paul Heft for the link.

Does our body chemistry make us inherently xenophobic?: Interesting speculation on the role of oxytocin in promoting social bonding and the distrust of outsiders. Thanks to CASSE for the link. 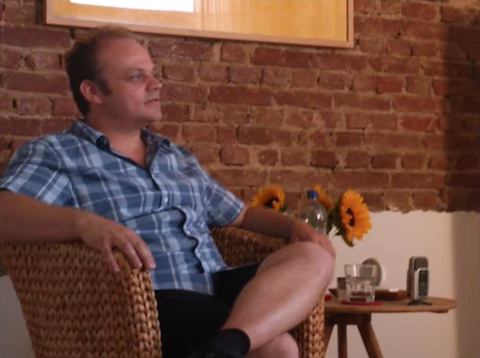 I’ll continue to post my favourite new videos, articles and quotes on this subject in my Links of the Month, not so much because they will be of interest to most of my readers, but because if their message is true it really makes most of everything else I write about moot. So if I suddenly stop writing on this blog, you can blame (or thank) the radical non-dualists.

Andreas Müller on radical non-duality: The message of radical non-duality is utterly simple but impossibly difficult to explain in language, but Andreas (pictured above) does an exceptional job of trying. He’s put up hundreds of hours of his Q&A discussions on YouTube, and he’s become IMO one of the most articulate speakers on the subject.

Kenneth Madden chats with Frank McCaughey: In one of his first videos since he “lost himself”, Frank talks with a long-time friend and they compare notes about what is seen “now” vs what was presumed to be real “before”. “Seekers” who resonate with the radical non-duality message will probably find this as intriguing as I did. (Full 55-minute version is only on Frank’s Patreon, for now.)

Jeff Foster, pre-“enlightenment”: Fascinating old video from Jeff Foster before he disavowed radical non-duality as dissociative and instead espoused “mindfulness”. He clearly “got” the message, but then walked away from it. Makes me wonder if people who are very emotional sensitive might be allergic to the “hopeless, uncompromising” radical non-duality message. Thanks to Caitlin Johnstone for the link. 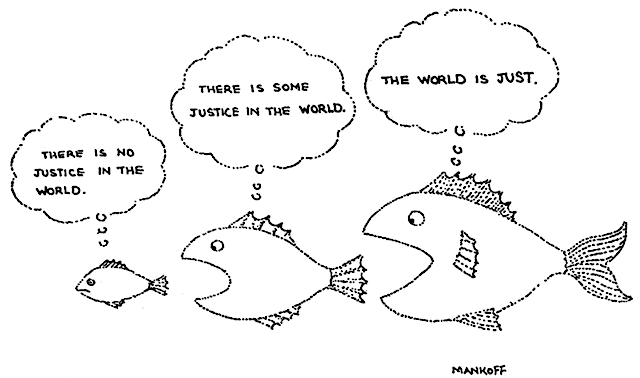 From Journalists of Color, in an open letter to the Philadelphia Inquirer:

We’re tired of being told to show both sides of issues there are no two sides of.

From Wesley Lowery, a Black journalist who who left The Washington Post after he clashed with the paper’s white executive editor over issues of “journalistic integrity”:

American view-from-nowhere, ‘objectivity’-obsessed, both-sides journalism is a failed experiment. … We need to rebuild our industry as one that operates from a place of moral clarity.

We can and must do better than going back to normal. Normal is the problem.