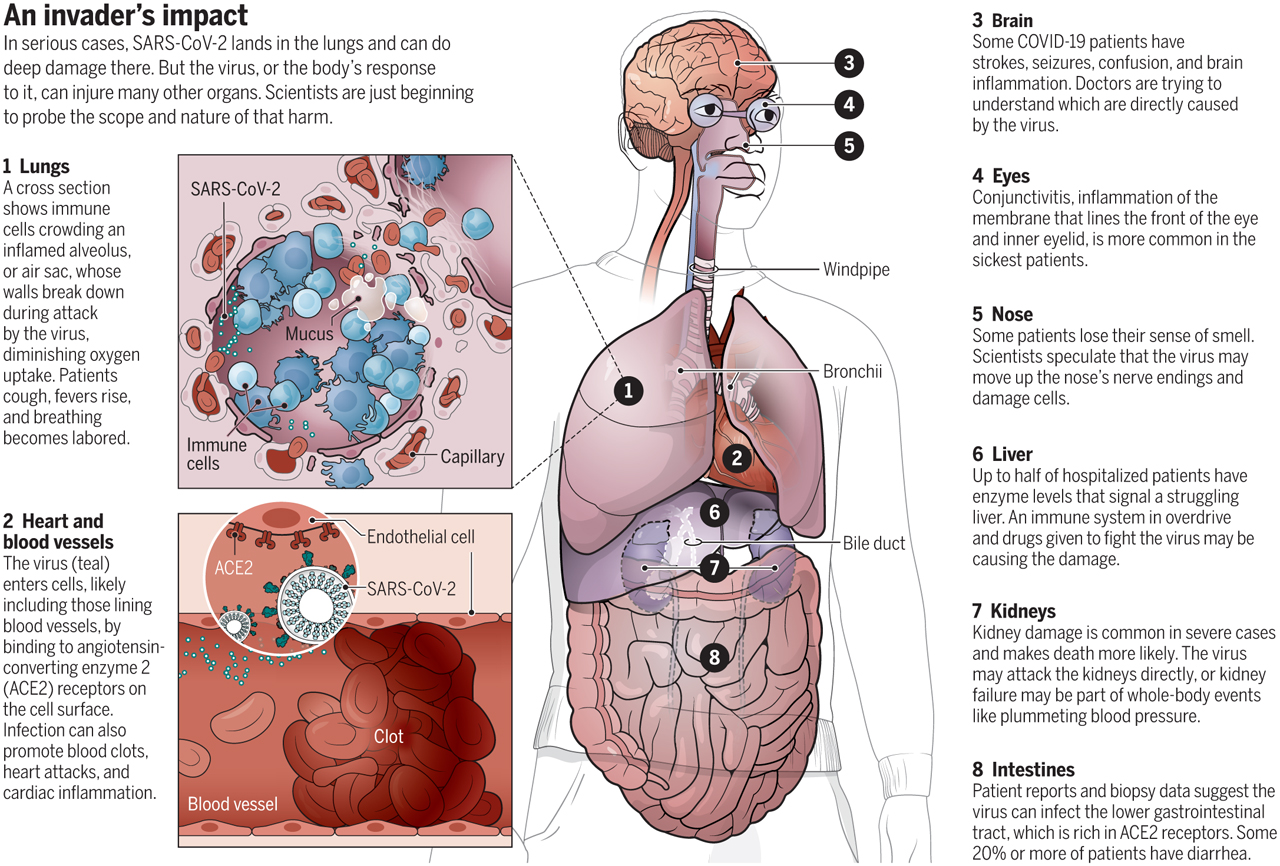 image by V Altounian in Science magazine showing some of the early discoveries about the widespread and serious effects of CoVid-19 on the body (other effects, and unique effects on some infected children, have been found since this report)

I said my previous post on CoVid-19 would likely be my last, at least for this “wave” of the disease, but I thought it might be useful to summarize what we now know (which is still pathetically little), and what we still don’t know (mostly everything) about this disease, as we head into the summer months. I’ll avoid proffering any advice, for a ton of reasons, but the common sense approaches to take at this juncture, erring on the side of caution, are pretty obvious.

What we think we know at this stage:

What we really don’t know at all at this point: 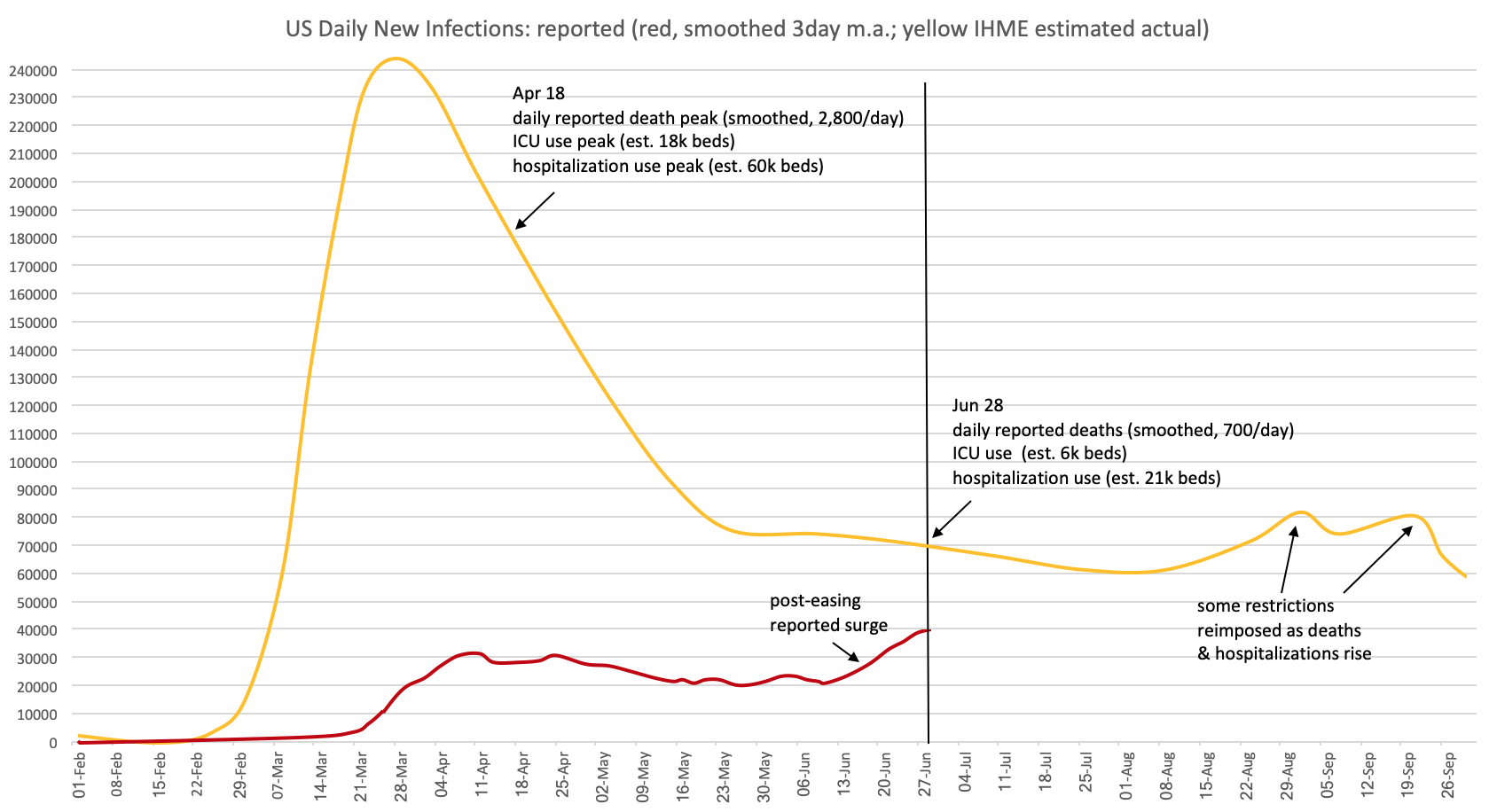 *Here are the smoothed (moving average) data for reported new daily US cases (red), compared to the estimated actual numbers of new daily cases (yellow) that IHME uses in its forecasts. While the late-June “surge” in reported cases looks alarming, it may just reflect that finally a larger proportion of actual new infections are being tested and reported. As noted above, that doesn’t mean reopening is wise: 70,000 new cases a day is still dangerously high and the projections could change quickly if social distancing, event-size and business opening rules are eased too quickly or not followed. And 70,000 new infections a day means a million Americans will be infectious to others each day through the summer.

PS: June 29 addendum: just in, from Michael Greger on CoVid-19’s apparent effect on the immune system:

[The cytokine storm reaction of some of those infected with COVID-19 who have healthy immune systems] has led some to consider immunosuppression [eg steroids] as a treatment for severe COVID-19, but of course immunosuppression for hyperinflammation in COVID-19 might be a double-edged sword. So, when you see that broccoli sprouts can whip up natural killer cell activity within two days, is that a good thing or a bad thing for COVID-19? It was good for seasonal flu, but who knows with this new coronavirus.

Young children have relatively immature immune systems, and normally suffer disproportionally from viral infections such as the flu––but not, apparently, from COVID-19, or SARS or MERS, for that matter, the other two deadly coronaviruses. It’s interesting; one theory as to why children seem protected suggests that greater pre-existing exposure to common-cold coronaviruses offers kids some cross-protection against the new virus. But ironically, a competing theory suggests it’s their lack of exposure to similar viruses that’s safeguarding them. There’s a phenomenon known as ADE, antibody-dependent enhancement, a phenomenon first described more than 50 years ago. In most cases, the antibodies our bodies make to target pathogens neutralize them or, at the very least, tag the invaders for removal. Sometimes, though, antibodies can actually facilitate viral infection and exacerbate disease.

This may be the case with SARS, where antibodies generated against the viral spike proteins were sometimes found to promote infection. In monkeys, an experimental SARS vaccine resulted in aggravated lung damage. Now, vaccine developers are well aware of this phenomenon, and would work to ensure any commercial vaccine would be free from this failing, but it has been used to venture a guess to account for the unusual age distribution of severe COVID-19 cases.

Perhaps similar coronaviruses circulated silently decades ago, and those old enough to have been exposed to them are now experiencing exaggerated responses to COVID-19. But young people never saw them, so they don’t get the over-reaction. I’m not suggesting this speculation is true. I just use it to illustrate the complexity of our immune interactions. Viruses attack, we counterattack, and then viruses sometimes evolve to use our own counterattack in their favor.