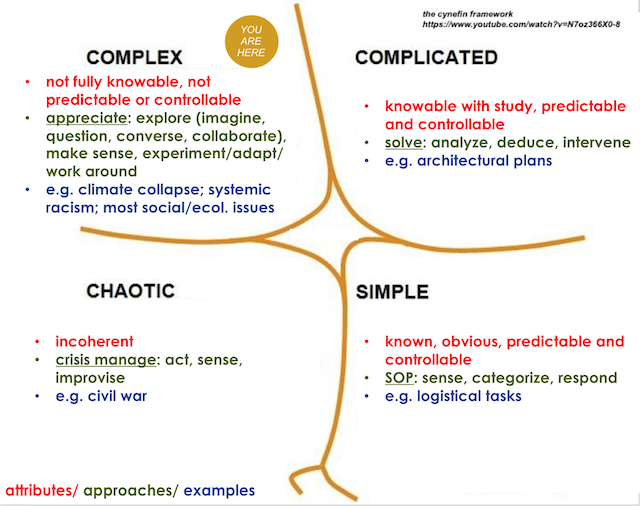 This is a bit of a screed against really bad “strategic” plans, which is to say most of the documents that go by that name. Most written plans these days are means to achieve a particular set of objectives, and most of those objectives have to do with complex situations. If the situation or problem were merely complicated, anyone with appropriate training and basic analytical skills could solve it; there would be no need for an involved plan.

Whether it’s an organizational goal (like coping with CoVid-19 or with a competitive threat), a social one (like combatting racism), an economic one (like reducing inequality), or an ecological one (like dealing with climate collapse), chances are it’s about dealing with complex predicaments, not (merely) complicated problems.

As I’ve explained in my “Complexity 101” posts, the difference is night and day. As the Cynefin chart above shows (Cynefin, pronounced “kuh-nev’-in”, is a wonderful Welsh word that means something like “the place from which your identity and understanding arises”), complicated problems can be analyzed methodically and pretty-much solved, such as  in the design and construction of a building. A complex predicament on the other hand can never be fully or even thoroughly understood — there are too many variables at work — so the best that can be hoped for in addressing it is a collective appreciation of it and some ideas to accommodate, adapt to and/or work around it.

That doesn’t mean that dealing with that competitive threat (or other complex, dynamic socio-economic or ecological challenge) is hopeless. It just means there is no way to reliably “fix” it. You might find ways to outwit the new competitor, but if you succeed it will be more good luck than good management; rewards or punishments for your success or failure are likely to be inappropriate in any case. You will likely not even really know whether your ultimate success or failure had much of anything to do with your actions. The thing about complex situations is you can never know.

So if we can’t “fix” a predicament, what are some of the best ways to “appreciate, accommodate, adapt to and work around it”? And how can we get the oblivious command-and-control psychopaths most of us have worked for to appreciate the intractability of predicaments, stop asking us to “fix” them, and let us get on with doing our best at what we do?

My philosophy on this differs from that of most of the complexity theorists who get paid for helping their clients deal with complex predicaments. If they want to continue to get paid, they need to offer the client more than “it’s a complex predicament so there’s no solution”. They will suggest ways to intervene (in a way they’re offering a kind of corporate therapy for what is in fact an untreatable condition).

I’m not much for therapies that suggest that you can fix what you can’t. Call me a defeatist (you won’t be the first) but I think there’s a lot to be said for acknowledging what we don’t know, what we can’t predict, and what — no matter how gargantuan and powerful we might grow to be — we really can’t hope to change. Pollard’s Law of Complexity says (sorry for those tired of hearing it):

Things are the way they are for a reason. To change something, it helps to know that reason. If that reason is complex, success at truly changing it is unlikely, and adapting to it is probably a better strategy. Complex systems evolve to self-sustain and resist reform until they finally collapse. That is just how they work.

What we can do is to learn more about the complex predicament, and about our own situation (personal and community) trying to deal with that predicament. And we can try some things out, some of which (unpredictably) may seem to work, to some extent, at least for a while.

When I talked to clients about complex predicaments (I’m long retired), I tried to keep in mind that people dealing with such predicaments are a lot like squirrels facing a squirrel baffle blocking their access to a birdseed container. The squirrels have no control over the situation with the baffle, which may suddenly change in unpredictable ways. All they can do is explore it, experiment, and try to work around it. Humans dealing with complex predicaments are really no different.

Here are ten things that I often tried to do during my career helping small enterprises tackle big challenges — things that we can do to explore and learn more about complex predicaments that we can never fully know or understand, and to experiment with them, work around them, and adapt ourselves to them as the situation changes:

gif of chess master Patrick Wolff from a post on chunking when dealing with complex situations, by Richard Maltzman

There’s a propensity among the lazy and idealistic (speaking as someone who’s inclined to be both) to put unrealistic “placeholders” in place of practical actions, to make apparent great leaps forward in achieving one’s objectives in grappling with predicaments, when those placeholders are dependent on some factor that is actually beyond your group’s control. So it’s important that your plan avoid steps that depend on:

If you’re reading an analysis or proposal or plan that includes such dependencies, please stop wasting your time. If you’re writing plans that include such dependencies, it’s time to stop kidding yourself and your client or audience and get real. Recognizing the current situation and its constraints isn’t defeatist — it’s honest and pragmatic and can liberate you to start focusing on things that you can actually control and accomplish.

Squirrels trying to beat the baffle know these things. They know to watch other squirrels try, and learn from them; that collaboration works better than solo effort (I once watched two raccoons, one on the shoulders of the other, unbolt and completely dismantle a bird feeder with a squirrel baffle in under five minutes, including carrying off the metal baffle); that it’s important to overcome misunderstandings and preconceptions about the system they’re studying; that the reasons for success and failure are usually complex and not straightforward; that small successes are better than huge failures; that approaches need constant tweaking to improve their likelihood of success; that sometimes they need to be bold and take a chance on something scary and risky; that the tools at their disposal are usually limited in how much they can help them; that really wanting something badly is rarely enough; that good strategy means giving up doing something that wasn’t working; that it’s often best to break a tough challenge into more manageable smaller ones; and that sometimes it makes sense to give up and move on to another, less intractable, objective.

So you might do yourself and your collaborators a favour by thinking like a squirrel next time you or your group are dealing with a complex predicament like:

As for how to deal with self-obsessed, arrogant bosses who are clueless about how to actually, effectively deal with these kinds of situations, I have no real suggestions, other than to find better work. Now that‘s a complex predicament.

This entry was posted in How the World Really Works, Working Smarter. Bookmark the permalink.

3 Responses to Ten Tips For Dealing With Complex Predicaments