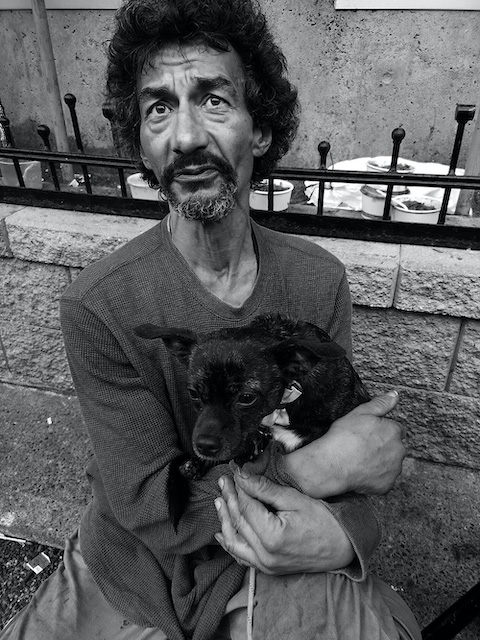 Matthew Schimpky, a volunteer in Vancouver’s Downtown Eastside Overdose Prevention Society, takes a break from work to look after a resident’s dog. Photo by Sarah Blyth, a founding member and frontline worker for the Society, part of an amazing photo collection in the Tyee.

We have a medical crisis in BC, and it’s not CoVid-19, though the pandemic could yet explode here and become one.

The medical crisis is the deaths of over a thousand British Columbians every year (many times the CoVid-19 toll) from poisoned street drugs. To call it a “pharmaceutical opiate overdose epidemic” is a deception.

We should not be surprised when people, many of whom who are struggling mentally, physically and financially with seemingly endless and insurmountable challenges, turn to street drugs as a means of coping with their distress. Too often, because these drugs are unregulated and often laced with poisons — because it’s cheaper and more lucrative for their producers to make them that way — people who take these drugs die terrible deaths.

Surveys have repeatedly found that 95% or more of those dying from toxic street drugs were never — never! — prescribed addictive drugs. It only makes sense that those looking for respite from trauma and other societal illnesses would prefer to access safe, clean “brand name” drugs from regulated pharmaceutical companies rather than potentially toxic “street” drugs. But as governments have clamped down fiercely on doctors prescribing narcotics (even for patients relying on them for chronic conditions), those with dependencies are left at the mercy of vendors of unregulated products, which may be mislabeled, fake or laced with cheap synthetic fentanyl and other toxins.

You probably know people who, to cope with their difficulties, use alcohol, tobacco, pornography, sedatives, stimulants and other means of escape, and end up unable to properly manage their use of them, potentially leading to dysfunction, violence, and permanent harm to others and themselves. We’re all “addicted” to something, and those dying on the streets from toxic drugs are no different from us. They just have the misfortune of not having a safe, regulated supply of what they use to cope.

Many governments have been conned into believing that a “war on drugs” can be effectively won, and/or that “abstinence” programs and “aversion therapy” work, when all the evidence shows the opposite. A recent study suggests the success rate of even the much-touted “12-step” abstinence/rehab programs is between 5% and 8%. And that “just say no” programs actually produce more drug use than they prevent. These programs unfairly and cruelly blame the victims, making their situation worse, instead of working to eliminate the underlying conditions, and helping those with dependencies to live healthy, comfortable lives.

When the American Affordable Care Act extended eligibility for these failed abstinence, aversion and 12-step programs, unscrupulous operators exploited the prevalent blame-the-victim approaches by opening fly-by-night “treatment centres” that charge obscene daily rates ($1,000 a day and up). These programs cost more than 90% of the population could afford if they weren’t covered by insurance. And these same unscrupulous “entrepreneurs” have opened fake “halfway houses” for those “detransitioning” from drugs to supposedly stay safe, when in fact many of them are run by drug dealers exploiting the system and their often desperate “inmates”. Check out the link above for one man’s harrowing story of this horrific, outrageous, and worsening situation.

Those looking for better solutions have faced threats and fierce opposition from conservatives, religious groups, and the pharma industry, who want all the blame and responsibility to be placed squarely on the victims. Despite this, some governments have courageously piloted different approaches: free (and judgement-free) injection centres, or the provision of safe, free or low-cost drugs.  This allows users to escape the dread and fear of imprisonment, shakedowns, police abuse, street violence, and death-by-toxin that are often ever-present in their lives, so they can once again live fruitful, healthy lives and reestablish and sustain essential relationships with others.

Free injection centres provide those with substance dependencies with free, clean needles, a safe place to take their drugs, a watchful eye in case the drugs they take are bad, and, if desired, counselling and friendly support as well. They reduce the feeling of isolation that “illegal” drug users live with, and are often located in areas where community police have been trained to look out for them, instead of harassing them.

Dr Bonnie Henry, BC’s senior public health officer, even while masterfully coping with the province’s CoVid-19 situation, has called for the immediate decriminalization of the use of all drugs. When the government (facing an election) balked, she used her own authority to require that any registered nurse be allowed to prescribe (and even deliver) safe prescription drugs to anyone asking for them. That move has received international attention, but it’s just the first step.

What is required is an acknowledgment that those using street drugs, those suffering from addictions, those struggling with poverty and homelessness, those acting out their mental illness — all these people need treatment and healing and help. What they don’t need is more laws, incarceration, arrest and abuse in the streets and in institutions, including ineffectual, unsafe and punitive “treatment facilities” (rehabs, prisons, homeless shelters).

Paternalistic solutions have utterly failed, and, just as a guaranteed annual income has been repeatedly shown to be a vastly better solution to poverty than food stamps and other demeaning regulated programs, so too do those who are struggling with dependencies need their underlying conditions (poverty, homelessness, mental illness, trauma and abuse) addressed. And in the meantime they need simple, nonjudgemental access to whatever means they use to cope with their situation.

The lesson we should have learned from prohibition is not to make wanted products illegal, and hence drive their production to dangerous, underground, ruthless, violent criminal gangs. Instead, we should make these products more available, legally and properly regulated, in safe forms, and get the real criminals out of the business. And, for god’s sake, we have to start to trust our fellow citizens to figure out, with the best help available, how best to deal with the many crises we are all facing. There is no one “right” way to live, and we should appreciate that not everyone wants to live the way we do in any case.

So please, the next time you read about an “opioid epidemic” and “overdoses”, please challenge the deceptive terminology used and the simplistic binary victimizing diagnoses and solutions offered. The people dying are not too stupid or inebriated to manage their doses, and they’re not trying to commit suicide.

Like you and me, they’re just trying to cope with dysfunctional systems out of control and the hardship this dysfunction has imposed particularly cruelly on them. Give them a hand, when you see them, when you hear their stories, when you object to the obfuscation of the problem by politicians, and when you vote. You could easily be in their place right now, were it not for circumstances over which neither of you has any control.

Thanks to Kelly Gavin, a professional psychotherapist who has lived and worked in the Downtown Eastside and other parts of Vancouver, for her thoughtful contributions and edits to this article.