What’s the Matter with People? 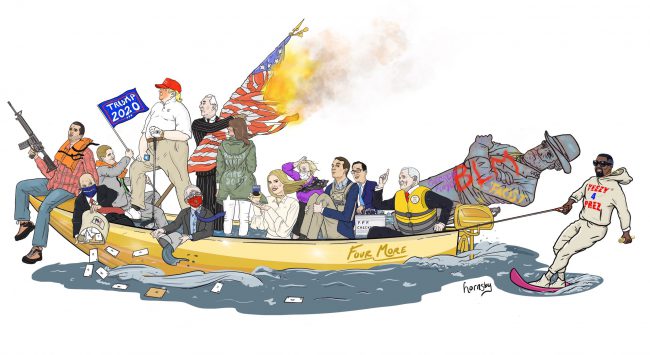 On September 1, I published an article called What If Trump Wins Again? Two months later, it seems timely. So I re-read it today, and think I called it just about right.

If the results are a wake-up call, I don’t think either “side” is reading it correctly. As in 2016, voting was an expression of anger and fear. Last night, before the early and mail voters had been counted, only one state (AZ) looked different on the US electoral map than it did four years ago. The changes even today look almost like hair-splitting; the % of popular vote looks unlikely to have budged at all. Nothing has changed.

By that I mean in particular that a significant majority of white male voters, the cohort most likely to vote, has, as they have at least since the astonishing 1960s,  supported Republicans across the board, credentials and competence not even being a consideration. In short, they supported one of their own: as I put it in my earlier article:

What does it tell you that a majority of white males of all ages are knowingly prepared to vote again for a candidate who is blatantly corrupt, a pathological liar, clearly mentally deranged, uninformed, racist, sexist, utterly unprincipled, and staggeringly incompetent?

There is nothing “the matter” with the 48% of the population that voted for this candidate and party in this election. They are acting out their conditioning just as those who voted for the other candidate and party did. I would wager that just about every voter in this election was driven largely by fear and anger and not really by the issues at all. There is plenty of evidence that neither candidate or party endorses anything even close to a progressive agenda. And I think the last Democratic president wore out the word “hope”, so I don’t believe that was a big motivator either.

The voting was entirely reactionary — on the part of conservatives to try to sustain some of the regression of the past four decades on social issues, and prevent it being undone, and on the part of progressives to try to roll back the more heinous, ecologically ruinous and cruel programs and laws that have been introduced, starting with Reagan, the first truly reactionary president in the modern era, and continuing ever since.

But with all the blaming, name-calling and accusations, what is always unrecognized is that none of us has any choice over what we apparently do, or believe. We are entirely conditioned by our culture, by our genes, and by the circumstances that emerge in the moment.

I know this is an unpopular statement, (a “cop-out”), but scientists and philosophers are increasingly coming to this astonishing conclusion. Free will is an illusion. That doesn’t mean the future is predetermined, just that given the circumstances that will arise in the future, through no ‘fault’ of anyone, our behaviours will be not be of our choosing. That doesn’t mean they won’t be rational or irrational, informed or uninformed, emotional or stoic, just that we will have no control over any of them. We can’t say what the circumstances will be in the future, but we can be sure that, given those circumstances, we will have no say over how we react, and what we do, or don’t do.

If that seems outrageous, consider that the alternative, of saying that the knowing selection of a racist, sexist, homophobic, corrupt, incompetent liar for re-election in the US was willful, ie that it was a conscious, deliberate and voluntary choice.

Try to make sense of that — you can’t. People believe what they want to believe and their conditioning will lead them to act accordingly.

With few exceptions, we don’t want genocide, mass incarceration, racist crusades, or medieval laws. We just want the things we value to be retained or restored, or implemented for the first time. And while I have no doubt that most white males are by their (cultural and perhaps genetic) conditioning racist, sexist, and homophobic (ie in the words of Isabel Wilkerson they are blind to the prejudices of their Caste), I believe the vast majority have been raised and conditioned to want to accommodate others’ views, within limits, so we can all live in peace.

That doesn’t mean we couldn’t be stirred to civil and global war. But that will only happen if and when our conditioning leads us to believe there is no other easier choice to achieve what we believe must be done.

So I think blaming the pollsters, social and other media, campaign managers, human ignorance and credulousness, foreign agents, extremists, sinister cabals, or previous generations for the outcome of yesterday’s US election is just more reactivity, unwarranted and unhelpful. It’s easy and tempting to lay blame. But we had no choice about what happened yesterday, which is very, very close to what happened four years ago.

Our conditioning hasn’t changed. The circumstances of the moment for most haven’t changed (except to get worse). Why should we expect our behaviours to be different? Except of course if we believe in the inextinguishable myth (because we want to believe it) of divine will or of progress. These myths have been thoroughly debunked, but as long as we want to believe them, we will.

So what then? What am I suggesting we should do?

My answer, which almost no one likes (possibly why readership of this once-popular blog has dropped over 90%), is — nothing. Accept that we are all doing our best, that we are now well into both economic and ecological collapse, on a global scale, and that this is how collapse plays out. It’s a complex system and we are conditioned creatures. There is no “fixing” this.

So what then? If we can’t fix it, what should we do? If you’re still asking, it’s clear that you cannot accept that we have no choice. This article might (extremely unlikely) be read by someone who is shifting their views (involuntarily), and might therefore (minutely) alter their conditioning, enough perhaps to change their vote, next time, depending on the circumstances of the moment next time. Impossible to say. Just as I have no choice over writing this endless and increasingly unpopular blather.

Tomorrow I will be on a Zoom call I dread with a real estate developer. I will be filled with rage, and try to keep my mouth shut (I was asked to attend as a favour). I cannot change what will arise for me then, in the circumstances of the moment (and I pretty much know what they will be). My rage will be futile, and it will accomplish nothing except to provoke an unhealthy chemical reaction inside my body. I can tell myself that this is the case, that it would be better if I were equanimous about what I know cannot be changed. I think it’s 50-50 that I will just shut up and say nothing (a sign my conditioning has changed over the past decade, due to circumstances I can’t control). I will be, for as long as I stay on the call, a microcosm of the American voter contemplating yesterday’s election.

6 Responses to What’s the Matter with People?