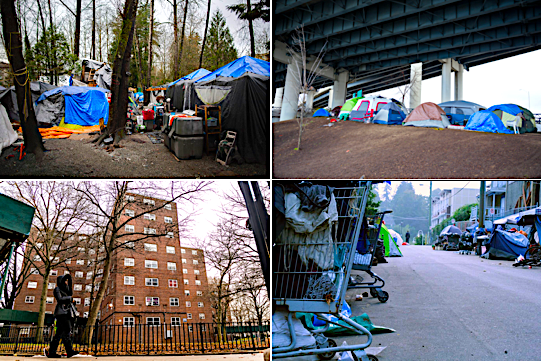 The Underhoused: Tent cities in (upper left) Vancouver BC, (upper right) Portland OR, and (lower right) new tents on a street in Nanaimo BC. The Vancouver site was bulldozed and converted to a playground. A new Portland tent city site has been installed by the local government, to mixed reviews. The original Nanaimo tent city site was bulldozed and replaced with “temporary” housing in construction trailers, and no one is happy. The building lower left is one of 2500 public housing “projects” run by New York’s NYCHA, housing nearly 400,000 people; the authority is near bankruptcy and many of the facilities are plagued with problems rendering them close to uninhabitable.
—————

If you’d take the train with me, uptown, thru the misery
Of ghetto streets in morning light, it’s always night
Take a window seat, put down your Times; you can read between the lines
Just meet the faces that you meet beyond the window’s pane

Or put your girl to sleep sometime with rats instead of nursery rhymes,
With hunger and your other children by her side
And wonder if you’ll share your bed with something else which must be fed
For fear may lie beside you or it may sleep down the hall

Come and see how well despair is seasoned by the stifling air,
See your ghetto in the good old sizzling summertime
Suppose the streets were all on fire, the flames like tempers leaping higher
Suppose you’d lived there all your life? Do you think that you would find
That it might begin to reach you why I give a damn about my fellow man;
And it might begin to teach you how to give a damn about your fellow man

Listening to this half-a-century old song and realizing how little has changed. How can we hope to understand the despair, the rage, the hopelessness that most — most — of the world wakes up to and lives with every day, in the endlessly decaying urban ghettos, the hollowed-out mountain mining towns, and all over the world in the homeless camps, the refugee camps, the grinding, sprawling urban slums with their stench of death, and the desolate farms with their endless, ghastly labour of struggle, misery and hard-scrabble survival. How much longer do we expect them to stay silent, to keep doing what they’re told they have to do, to salute, put their shoulder to the world, work, and obey, and pray for a better future? 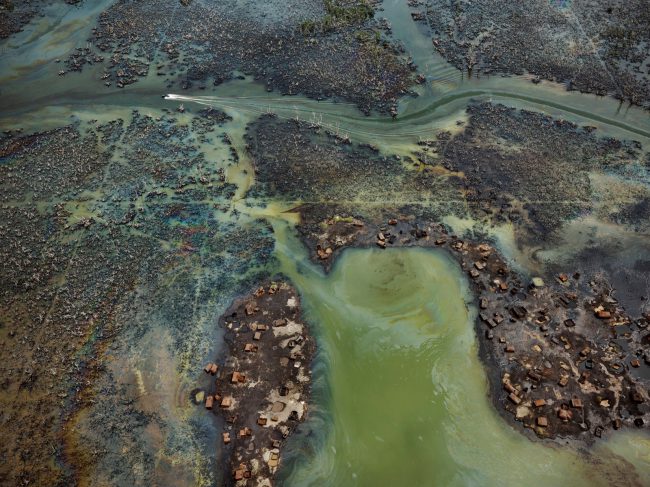 Oil Bunkering [theft] #4 by Canadian photographer Edward Burtynsky, from The New Yorker. This is an aerial view of illegal refineries on the Niger River processing stolen Nigerian oil. The helicopter crew had to be alert for gunfire from the refinery operators.

Lessons from the garden: Paul Kingsnorth reviews the work of Narendra, an anthropologist living and working in the Abujhmad region of Bastar, India one of the last bastions of traditional Adivasi (“uncivilized”) people many of whom are still largely untouched by modern culture and technology. The lessons are:

“A ghastly future of mass extinction”: That’s what scientists, again, endlessly, unheeded, warn us is coming. If we do not…  If, if, if. goddamn copout if.

“Nature is under siege”: The massive die-off of insects, on which all life depends, is accelerating, and with it, ecosystem collapse. 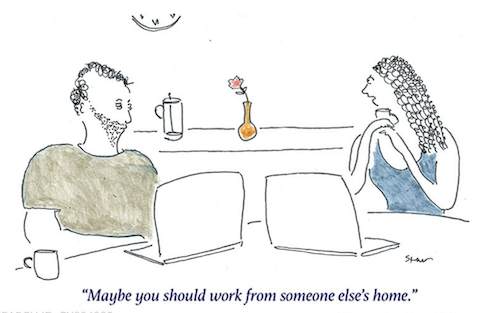 from Cartoon Collections, by Michael Shaw

Best short film ever?: If you watch nothing else on YouTube this year, watch this two-minute Iranian film by 20-year-old Sayed Mohammad Reza Kheradmandan. Its message is universal. Afterwards, read the comments to see what you missed, and love it even more.

China the good, China the bad: Vilified by both warmongering American political parties, the people of China, as everywhere else, run the gamut. Their doctors, blamed for starting CoVid-19, actually through their openness and sharing with the rest of the world, not only saved millions of lives, but have kept their country from being a major spreader of the disease, unlike some countries we could mention. And they can also be fierce humanitarians, saving the life of a sick Australian in Antarctica. But then there are the politicians. A survivor of two years of hell in a Uighur ‘re-education camp’ describes first-hand the inhuman treatment that China inflicts on its ethnic minorities.

The spy ecologist: Meanwhile, the execrable CIA has been known to hire some real scientists who do valuable work, like Linda Zall who, before her program was shut down, used detailed satellite spy photos unavailable anywhere else to map ecological changes on land and sea. Thanks to Tree Bressen for the link. 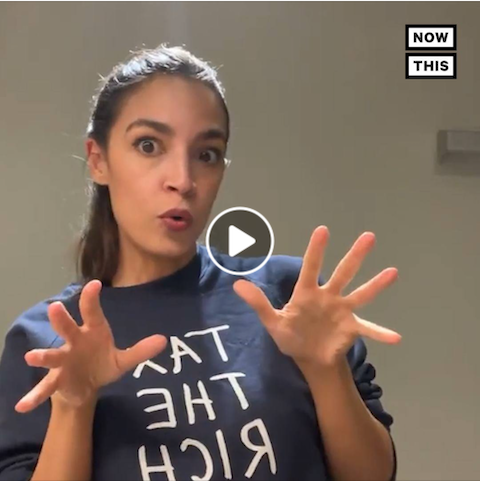 Photo of AOC in Now This News

In other American news: I’ve already written my thoughts on the capitol riots, so here’s what else has been going on while our attention was elsewhere:

From Industrial to Financial Corpocracy: The shift from Tweedletrump to Tweedlebiden will usher in a shift in allegiance from industrial corporatists to financial corporatists, who are arguably worse for financial stability and more likely to precipitate economic collapse. Here’s a detailed article explaining what the power shift means, and why financial corporatism will make inequality and the economic woes and suffering of the 99% worse. Thanks to Stu Henshall and Michel Bauwens for the link.

David Graeber on democracy: Back in 2015, the late great anthropologist and economist explained how hard the founders of the US worked to ensure there would be no democracy in their country. They knew that if there were, the 90% with no wealth would choose to appropriate the wealth of the 10%, and that could never be allowed. 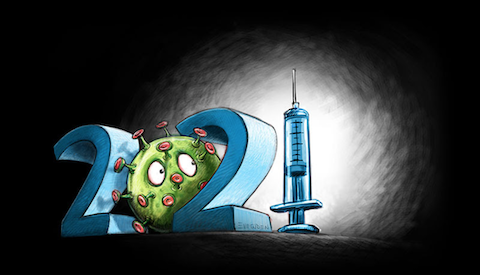 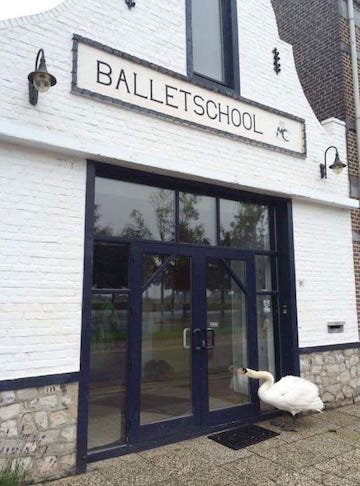 Late for rehearsal: image on Facebook, original source not cited; thanks to Eric Lilius for the link

Albatross!: The 69-year-old Laysan albatross Wisdom has laid her 36th egg on Midway Atoll refuge. She’s the oldest known banded bird in the world and still going strong. Albatrosses lay a single egg every year or two and both parents (or sometimes step-parents of either gender) tend the nest until the hatchling fledges nine months later. To see an example, NZ has a Royal albatross cam that celebrates the entire process at one nesting site.

The greatest extinction: The near-total extinction of all life on earth, 2.7Bya, when life was still tiny and new, was caused by… oxygen.

Journey to the microcosmos: Another series of the Vlogbrothers shows what you can see, and learn with a modest-priced microscope. Water-bears are just the beginning. 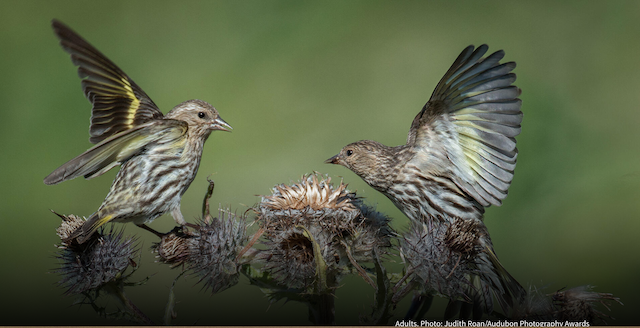 Photo of Pine Siskins by Judith Roan for Audubon. One with everything…

The illusion of free will: A 2001, but still timely, summary of the debate over free will, presented by a philosopher and scientist, that moves beyond the narrow debate over determinism. “The planning and subsequent action are not done by ‘you’ but by the universe acting through you. We are in a play in which we are both actor and audience and there is no script; the play just appears.” 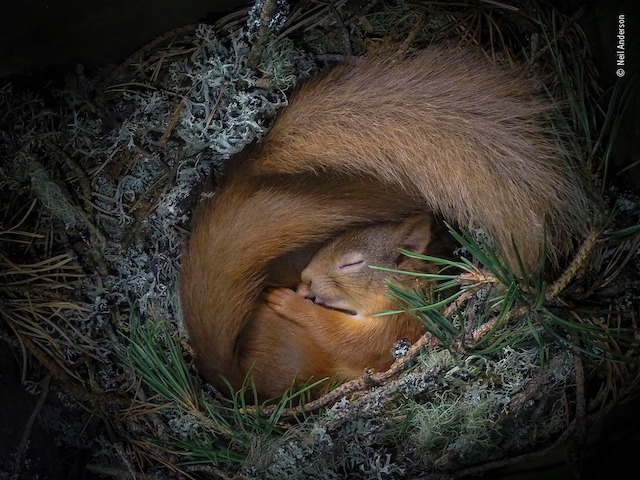 From Greta Thunberg on FB, yesterday (Thanks to John Kellden for the link):

A short summary from the ‪#OnePlanetSummit‬ in Paris yesterday:
Bla bla bla nature       Bla bla bla very important            Bla bla bla ambitious
Bla bla bla green investment       Bla bla bla great opportunity       Bla bla bla green growth
Bla bla bla net zero emissions      Bla bla bla step up our game      Bla bla bla hopeful
Bla bla bla…   (while locking in decades of further destruction)
• 10 years ago our leaders signed the “ambitious” Aichi goals ”to protect wildlife and ecosystems”. By the end of 2020 it became clear they had failed on every single one. Each day they have the possibility to act. But they choose not to. Instead they just sign some more “ambitious” targets long into the future while passing binding policies, locking in destructive business as usual such as the new EU Common Agricultural Policy (CAP). Of course change doesn’t happen overnight and of course we need the ”bla bla bla” to get moving. The question is; how many decades of bla bla bla do we really need? Because there has been quite a few so far…
• There are undoubtedly many great people working and pushing for change on government levels everywhere, but the current best available science clearly shows that the action needed is not possible within today’s systems. We need a whole new way of thinking.  And it gives me absolutely no pleasure or joy to keep pointing this out, but as it is now we can have as many meetings and conferences as we want – unless we start to treat this like the existential emergency it is, no real sufficient action will be possible. We cannot solve a crisis without treating it like a crisis.

From my friend Ron Woodall, in a PM:

How life works:
Life does not work. Life will kill you.
You are not okay. Nobody’s okay.
Nothing is ever easy. Nothing is ever over.
You are in this alone. The force is with somebody else.
Things will go from bad to worse. After worse, much worse. Then that’s it.
You will always be waiting in line. The other line will move faster.
You can’t win, you can’t tie and you can’t quit.
For everything really bad, there is an equal and opposite worse thing.
What goes up comes down faster.
There will never be a normal to get back to.
Nothing matters much and few things matter at all.
Most things happen at the wrong time or not at all.
If it starts on time, you will be late.
Things are worse than you suspect.
Turbulence is a fact of life.
The glass is not empty. There is no glass.
There is a hole in the bucket. The batteries are dead.
Life is funny but not really funny.
In a month it doesn’t matter.
It’s all fluke.
Nothing ever goes away.
Everything depends.

3 Responses to Links of the Month: January 2021